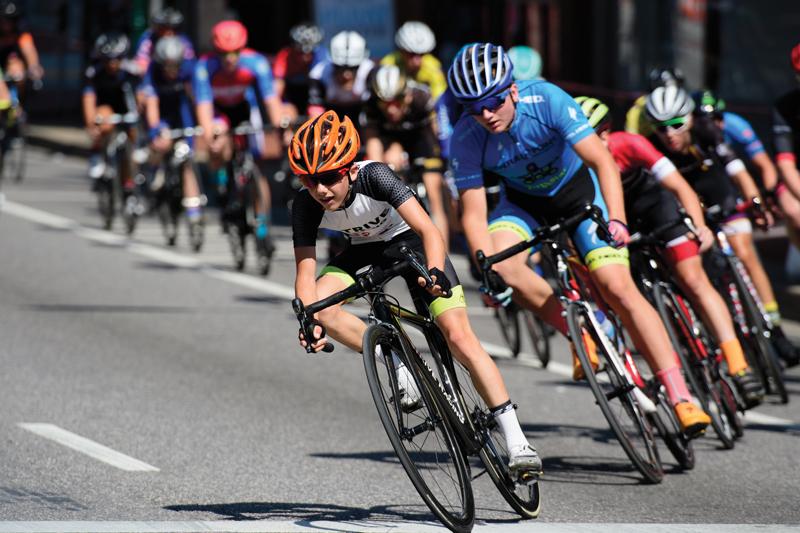 By Karen Gardner and photos by Ed Crawford

The USA Cycling’s Amateur Road National Championships returns to Hagerstown on June 20-23. The best cyclists from all over the United States will again experience the challenging, scenic Washington County roads. Challenging because of hills and twisting roads. Scenic because of the quaint, rural setting. Spectators will get to see youngsters, some of them future stars of the sport, ride their bikes at speeds averaging upward of 25 mph.

Cycling isn’t new to Washington County. Most of the major roads in the county have wide shoulders, specifically engineered back in the 1970s to give cyclists a wide berth from passing motorists. Ever since then, cyclists from surrounding areas have come here to ride, lured not only by the scenery and the cycling lanes, but also the lower traffic volumes.

It’s these same qualities that drew the organizers of USA Cycling to choose Hagerstown and Washington County as the venue for the 2018 and 2019 championships, over more experienced venues like San Diego and Los Angeles. The USA Cycling Amateur Championships crown the champions of the future, the men and women who in five to 10 years may ride in the Tour de France, the Olympics, and other major cycling events.

The race not only puts Hagerstown on the map for hundreds of cyclists and their families, it’s also an economic boost to Washington County.

The Maryland Sports Commission recommended the CVB compete for the event because of Washington County’s appeal as a cycling destination. “They thought we were a good fit because of our rural countryside and quality hotels,” he said. The commission thought the CVB was up to the task of managing it.

With help from Antietam Velo Club and Potomac Velo Club, two regional bike racing organizations, CVB put together a bid package, and Washington County was chosen over the California locations for the two-year contract. “The biggest stressor was getting the complicated traffic control plans approved,” Spedden said. “You learn so much the first year. This year, it’s ready to go.”

City and county officials and police agencies worked together. Tim Lung, then county zoning administrator, helped secure approvals. Lung, now retired, is a bike racer himself. “He was our go-to guy on traffic control,” Spedden said. “Nobody got hurt. There were no car wrecks. Now that he’s retired, he’s the course manager.”

A lot goes into getting a course ready for a top-class bike race. Roads need to be free of debris and potholes. Fire hydrants need to be cushioned with hay bales. Storm drains need to be covered. Puddles need to be swept away. “The course needs to be predictable, or someone gets hurt,” Spedden said.

Last year’s race brought in 672 participants. Cyclists and their families booked 585 room nights at local hotels. Before and during the race, the CVB’s website experienced a 50 percent increase in web traffic. “Three comments resonated with me,” Spedden said. “One said, ‘I never heard of Hagerstown until the event.’ One said, ‘I have never seen a race course so well managed and protected, and I race around the country.’ The third comment was, ‘It’s just so beautiful around here.’”

The race takes place over four days. On June 20, racers ages 11 to 23, along with older amateur racers, will contest time trials up to 18 miles. Riders will pedal along a closed Md. 67, riding from Boonsboro to the U.S. 340 entrance and back, through the rolling hills of Pleasant Valley, which offers spectacular views of farmland, forested areas, and mountains.

On June 21 and 22, cyclists will ride a circular route of up to 100 miles around Clear Spring, pedaling past cornfields, stands of forest, and over clear, pebbly streams. On June 23, cyclists will pedal an eight-block course to distances of up to 18 miles in the downtown criterium. Podium awards will go to the top five riders in each age group.

Spedden hopes that USA Cycling will consider bringing future races back to Washington County. Not only are road races a possibility, but there’s a nationally-known mountain bike course here in the county. For many years, Greenbrier State Park hosted the Greenbrier Challenge on a 5.7 mile rocky, steep course that even offers a couple of streams to cross.

“The underlying goal is to establish a relationship with this national organization in the future,” Spedden said.