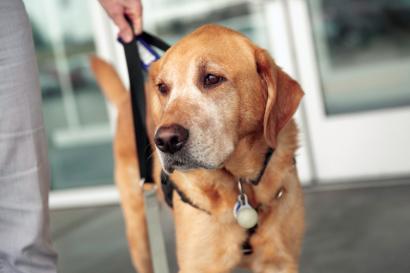 By James Rada Jr. and photos by Turner Photography Studio

The photo of Sully, the yellow Labrador retriever lying in front of the former President George H. W. Bush’s casket, went viral last year. Bush family spokesman Jim McGrath shared the photo with the caption “mission complete.” The touching image soon appeared on social media and in publications all around the world. It brought to the forefront the importance of service dogs in people’s lives.

Sully, who joined the former president in June 2018, began his two-year training to become a service dog with Karol Kennedy of Hagerstown.

Sully was a puppy with America’s VetDogs, an organization that provides service dogs to veterans and first responders free of charge. The dogs help owners with their physical injuries, PTSD, hearing and vision loss, and/or seizures. The organization partnered with Roxbury Correctional Institution to train the purpose-bred puppies as part of its Prison Puppy Program. Sully went there when he was only 10 weeks old.

Kennedy was the trainer who oversaw the program at the prison. “They needed a trainer to train the inmates to help the dogs socialize and train them,” Kennedy said.

She became a dog trainer after going through training with one of her dogs and seeing the beneficial effect it had on him. She then underwent an apprenticeship program that took years to complete. She was convinced of the positive benefits of dog training, though.

“Training can not only keep a dog out of a shelter, but they can become good citizens,” she said.

A retired military officer, Kennedy not only trains dogs in basic behaviors, but she also offers specialized training for service dogs.

At RCI, Sully and the other puppies were assigned to Kennedy and a team of inmate trainers and handlers. They raised the puppies, worked with them, and the inmates even slept with the puppies in their cells. The dogs underwent intensive training for more than a year to not only learn how to behave, but to perform service tasks like turning on a light switch. At the end of this stage of the training, the dogs have learned 30 commands.

“When their basic behavior is established, they go back to New York for additional training to be a service dog,” Kennedy said.

Despite this cost, there is a huge demand and a two-year waiting list for service dogs.

Because of this, Kennedy wants people to know the difference between a service dog and emotional support and therapy animals. She also wants to encourage people to have their dogs trained to be service dogs.

“Lots of nice dogs with some good basic training and socialization would be fine service animals,” she said.

It upsets Kennedy to see people misrepresenting their animals as service animals. This often happens on airline flights so the passenger doesn’t have to pay to have the animal transported in the cargo hold.

Kennedy received a call once from a dry cleaner who told her that a dog was running around out of control in his business. He had called the police but the dog’s owner said it was a service dog, so the police couldn’t do anything because service animals may go anywhere a person can go under the Americans with Disabilities Act. This doesn’t apply to therapy and emotional support animals. Kennedy knew right away that the dog wasn’t a service dog.

“A service animal must behave,” Kennedy said. “That’s one of the main things they are taught.”

A service dog won’t even go to the bathroom unless he or she is given a command that it is all right to do so.

A service dog must also perform a service, meaning it must do something for the owner to be a service dog.

“Service dogs are used in so many environments now that people need to know what a service dog is,” Kennedy said.

Kennedy has also traveled with service animals to learn the difficulties that owner and dog might face and how they can be dealt with. For instance, on a flight, if the owner needs to use the bathroom, the service dog must accompany the owner. The animal can’t be left alone, but most airplane bathrooms are barely large enough to hold the owner, let alone the owner and a service dog.

Incidentally, Sully’s mission is not yet complete. He is now a member of the Walter Reed National Military Medical Center’s Facility Dog Program working alongside other service dogs to help wounded soldiers and active duty personnel at the hospital.

“He is helping veterans with their occupational and physical therapy,” Kennedy said.