Come and Party on Hempen Hill 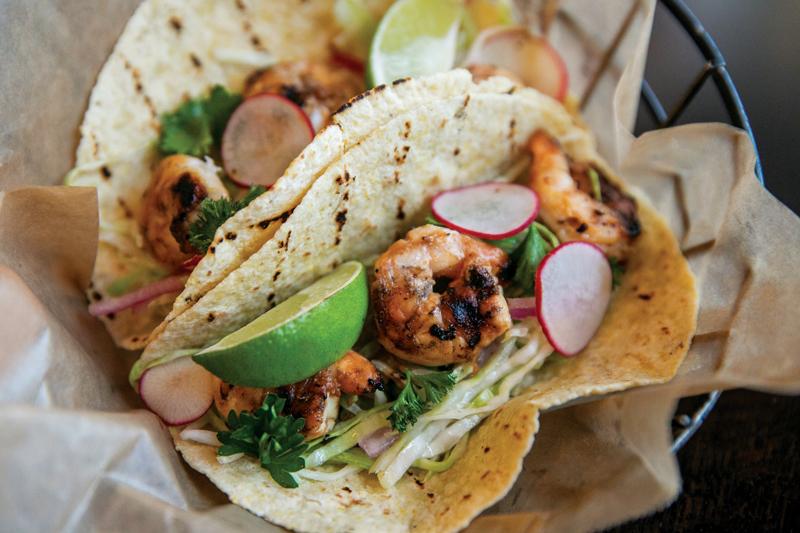 The Reeders’ love for entertaining friends evolved into the hottest BBQ joint in town.

The scent of barbecue assaults your senses as you approach the door of Hempen Hill BBQ. The Fountain Head Plaza restaurant has been a mainstay for 13 years, a credit to its faithful regulars, according to owners Kathy and Jay Reeder. Inside, the joint has its own vibe, from the hand-painted beer murals, to the industrial ceiling, dark colors, and long wooden bar. It’s relaxed, a place where you can gather with friends and take your time around a good meal.

From Parties to Proprietors

In 2004, life handed the Reeders a series of events that Kathy reflects on as the beginning of their restaurant story. “That year, Jay’s father passed away one month, the next month I got downsized from my job, and the following month, Jay’s mom passed away,” she recalls. “It was so much change at once and in our hippie universe we thought it was trying to teach us something.”

The pair had a history and reputation for throwing great parties for their friends and, after moving from Hagerstown to Clear Spring, they wanted to use the parties – and the great beer and food involved – to lure their friends to drive out for a visit. “What we hadn’t yet realized,” says Kathy, “is we were catering – we already had chafing dishes, and held beer pairings and themed events like Halloween parties.” At one such event, while drinking Hempen Ale, a friend dubbed it a “party on Hempen Hill” and the name stuck.

With the success of their parties, Jay started researching concession trailers – the precursor to modern-day food trucks – and told Kathy he wanted to take the leap and start a business. That following January, they opened their catering business and vowed to “trust the process” and see where it led them. A quick year later, they opened Hempen Hill BBQ as a full-service restaurant with the concept of “creating awesome food in the company of good friends,” Kathy says.

Their menu is, in part, a reflection of the years that Jay has spent refining, testing, and trying new things with his barbecue – a journey that has included a competitive barbecue team called 420Q. His team has competed in the Kansas City Barbeque Society circuit to take on some of the barbecuing greats at events like the Jack Daniels Invitational. The trophies of his winnings are proudly displayed at the restaurant. “The competitions are a great opportunity for us to keep our thumb on the pulse of what’s happening in the barbecue scene,” says Kathy.

Though Hempen Hill is known by many for its award-winning barbecue, the menu offers much more. The crab cakes made of all lump crab and no filler are a crowd favorite, as are the crab chips appetizer – they say they sell more than 650 a month! The desserts are house-made and seasonal so you can ask what’s new each week.

From the spicy black bean wrap to the smoked tofu, you can also find a variety of meatless options. It’s important to Kathy, a vegetarian herself, to ensure that the menu, and the way the business is run, reflects their family values. The restaurant prides itself on having a “scratch kitchen” with everything made on-site, and the staff work with farmers in the area to develop seasonal eats for their biannual menu changes. “We’ve also always recycled since the beginning and nobody was doing that back then,” says Kathy. “It goes back to the hippie way of living that we subscribe to.”

Grab a Pint… or More

More than two dozen beer selections are on the menu, along with wine and craft cocktails. They also have upped their “to-go” game by offering growler-filling for all beers on tap.

And if you enjoy drinks at Hempen Hill on a Friday night, they’re ready for you at their weekly Hangover Happy Hours Saturdays from 11 a.m. to 2 p.m. The Hangover menu includes a Triple Threat Burger – a house ground and seasoned blend of brisket, filet mignon, and ribeye grilled and topped with bay-seasoned fried egg, house bacon, cheese, lettuce, tomato, and crispy shallots. Wash it down with a Morning Crush, their own twist on a screwdriver, or a Smokin’ Mary, a bourbon-based bloody Mary spiked with a shot of wing sauce and fire cider.

Inside the restaurant, Kathy says she can often find familiar faces among their many regulars, many of whom are members of their free VIP club. Last year, the restaurant gave away more than $200,000 in food to its “Red Card Members” as a thank-you for their support.

She also credits the restaurant’s success with the staff both in and out of the kitchen. “We’ve built up a great staff with very low turnover,” she said. Some of their servers have regulars who ask for them by name and fill up their section when they know they’re on the schedule. They also solicit input from both their VIPS and their staff when they look at menu changes twice a year.

Every January they accept solicitations for donations for the calendar year, and in February, they review the requests and determine where they can best support the community. “Last year we held a cheesecake throw-down event and raised $24,000 in one day to support Brooke’s House,” Kathy recalls. Hempen Hill also offers benefit nights throughout the year during which 15 percent of sales goes to support various organizations like For Otis Sake and Children in Need.

Back to Their Roots

Kathy says that a successful business is always paying attention, ready to make changes, and looking forward to what is next. For her and Jay, looking forward meant looking back, in a sense. “We’ve gotten back to our party roots by hosting daytime parties,” she says. This year, they are planning a Mother’s Day brunch, a cigars and bourbon event the Monday after Father’s Day, and a Halloween brunch, as well as private events in the party room and catering gigs. “We still have a strong and busy catering crew who do drop-offs, pickups, and fully-catered events for all sizes and budgets,” says Kathy. “It’s brought us back full circle throwing fun parties with great people.”