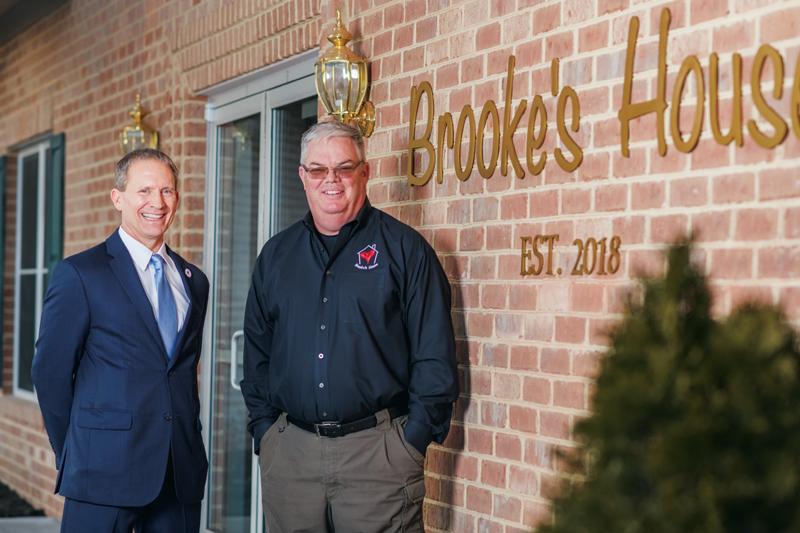 A father’s promise to his beloved daughter becomes a reality.

On a snowy January day, Robin Straley is busy fixing up Leah’s Room as the lettering on the wall proudly states. The bright, airy room has a hand-painted mural of Hello Kitty and new pillows and blankets with leopard print. “Some of Leah’s favorite things,” says Robin, Leah’s mother.

But despite the love and care Robin is putting into the room, it will never be occupied by her daughter. Leah died on Valentine’s Day 2018 after overdosing on fentanyl, a powerful opioid drug. She was 26.

Instead, this room will be occupied by others in Leah’s name. “This is a chance to do something good for someone who is struggling the same as my daughter did,” says Robin, solemn tears rolling down her face.

Leah’s Room is one of eight bedrooms at Brooke’s House, a sober living facility in Hagerstown which opened its doors on Feb. 5. The 16-bed, 8,300-square foot facility is the result of a promise a father made to his daughter and his determination to realize it even after she was gone. And it is also a testament to the strength and vision of a community, many impacted by the opiate crisis, coming together to build a safe haven and offer a second chance to those struggling with addiction.

“This place is sacred to us,” says Robin of the room she and her husband sponsored in Leah’s name.

Brooke Simmers was an athletic and outgoing young woman with a bright smile. “She was kind of the life of the party, so to speak,” says her father Kevin Simmers, the founder of Brooke’s House.  “But what that turned out to be was really a storm that was brewing inside her.”

The energetic and enthusiastic young girl, who was once interested in being a clown and even mastered the unicycle, began to change when she entered high school, says Kevin. “That’s when the storm really started to come out,” says Kevin. “She became oppositional and defiant. First cigarettes, then alcohol, then marijuana, then pills and eventually heroin.”

Brooke knew better. After all, her father was a Hagerstown narcotics officer often speaking at churches and schools on the dangers of drugs.  Now retired, he took pride in his job and arresting drug addicts and getting them off the streets.

“I felt I was doing God’s work,” he says of his part in the war on drugs.

Then it came home. “It was probably harder on Brooke than it was on me,” he says. “She knew what my job was and my loyalty to my profession.”

“Brooke knew what the expectations were,” says Dana, Brooke’s stepmother. “She was raised in a good family. She had a beautiful heart and a good soul. She knew what she needed to do. Her standards were up here (raising her arm). But what she was doing was down here (lowering her arm). She could never find that balance.”

Father and daughter shared a close bond, however.  And not long after Brooke moved out on her own weeks before her 18th birthday, she came to her father with disturbing news. She was abusing Percocet, an opioid pain medicine, and couldn’t stop. By Christmas of that same year, 2013, she confided to her father that she was shooting heroin.

It was a downward spiral from there. Brooke would turn to stealing and prostitution to get the drugs she so desperately needed in an effort to ward off the horrors of withdrawals with its vomiting, cramps, chills, and sweats. “I remember holding her during withdrawals,” says Dana. “It was like the flu times 10. She would say, ‘I’m going to die.’  It was horrible.”

Brooke became so desperate that she once asked her father to shoot her as she lay in the family’s front yard, ravaged by her addiction and her inability to conquer it. And she so badly wanted to conquer it, says her father. “She wanted to beat this,” he says.

Not that there weren’t countless attempts at getting Brooke help. But it was not easy as the family struggled with insurance and getting Brooke into an inpatient rehab facility. “When someone is fighting for their life and fighting for their sobriety and you’re trying to get an insurance authorization, it’s pretty inhumane,” says Kevin. “When you have a heart attack and you’re laying on the bed, they’re not checking your insurance before they hit you with the paddles.”

At one point his insurance, says Kevin, informed him that Brooke’s addiction “wasn’t serious enough” to warrant her being placed in an inpatient facility, but instead referred her to an outpatient program.  And when she was finally approved for an inpatient facility, she was placed on a waiting list which can mean life or death for an addict who is always just a dose away from that one fatal fix.

Through all of this, Kevin was changing his thinking about drug addiction. He no longer believed incarceration was the answer and began seeing addiction as a disease requiring treatment. Standing before a crowd during the ribbon-cutting ceremony for Brooke’s House, he apologized. “(As a narcotics officer) I referred to users as losers,” he said. “I referred to drug addicts as weak-minded people. I’m very sorry for that. They were not losers. They were drug addicts who needed help.”

And with Brooke, Kevin had a front-row seat to the struggle. He remained steadfast. “Brooke was so loved,” says Dana. “If love could have saved Brooke, she would still be here with us.”

Even during the darkest of days with Brooke tapping on car windows and begging for money at a local gas station to feed her habit, or finding her unresponsive, a tourniquet still around her arm, in the family home, Kevin never gave up. He believed in her and wanted her to know it.

“Every day, he would say to her, ‘ I’m so proud of you,’” says Dana. Even with only a single day clean, he would make sure to let her know how proud he was of her and her attempts to get sober.

In fact, Brooke had her father write those same words, “I’m so proud of you,” on a piece of paper days before she died. “She was going to get that tattooed on her arm to remind her every day how he felt,” says Dana.

Brooke would eventually serve jail time for four months, and it was during this time when she was clean and thinking more clearly that she talked to her father about her dream.  Brooke wanted to create a sober living house. One that would be very different from the ones she had experienced, says Kevin.

“The houses we were referred to after the 28-day program were horrible,” he says. “Dirty, bed bug infested, in a state of disrepair. That’s no cut on the houses that are out there, because they are doing the best they can. But I don’t think it was a good recipe for sobriety.”

Kevin agreed to the idea, but with conditions. “I told her if she stayed sober for a year, we’d try to get her a house,” he says. “I also told her that she would have to go to college, take some drug and alcohol classes, maybe business classes.”

Sadly, Brooke never saw her dream come to fruition. On April 14, 2015, she drove to a church parking lot, climbed into the back of her car and slipped away. Brooke was dead from a heroin overdose. She was 19.

Kevin was devastated. But he would not be deterred from pursuing his daughter’s dream, going on to build Brooke’s House in her name and in her memory. “I’m no expert,” says Kevin. “Not at fundraising, building houses, creating a nonprofit. But I did my best.”

And he made it happen. He was also helped by a community that readily embraced the project.

The three acres of land where Brooke’s House sits, serene and removed from temptations, were donated. Contractors, retail stores, professionals, and donors all stepped up to make Brooke’s House a reality.  Volunteers came forward to assist in any way they could. Some of them, like Leah’s family, touched directly by the opiate crisis.

“It helps me keep the grief at bay,” says Robin, Leah’s mother, who was days away from the first anniversary of her daughter’s death. “You have to be involved and believe in something to help take away the pain.”

Robert Janisko understands this all too well. His 32-year-old daughter, Nicki, a brilliant student and compassionate nurse, died of a heroin overdose just months after Brooke.

Early on, he met with Kevin and accompanied him to the site where Brooke’s House would be built. “It was kind of a dream at that point but has turned into something so much bigger,” he says.

Today Robert is president of the board for Brooke’s House.

Robert Janisko and Robin Straley are among the volunteers scurrying about days before the ribbon cutting for Brooke’s House. The sense of pain and loss is palpable. Some of the rooms, like Leah’s, are named in honor of a loved one lost to addiction. But there is also a surging sense of purpose.  Brooke’s House, says Kevin, is about looking forward. “We are in the business of hope,” he says.

And it is embedded in the very program itself. Women coming into Brooke’s House will not only live in a first-rate facility, gleaming with its newness, but will receive counseling and be required to earn a GED if they have not graduated from high school.  They will even be taught skills so that once they leave the facility, they may find work. This includes producing, packing, and marketing chocolate.

For Kevin it is all about offering women struggling with addiction the opportunity to grasp at a different life, one filled with sobriety and possibilities. The kind of life Brooke wanted so badly, and that her father wanted so desperately for her.