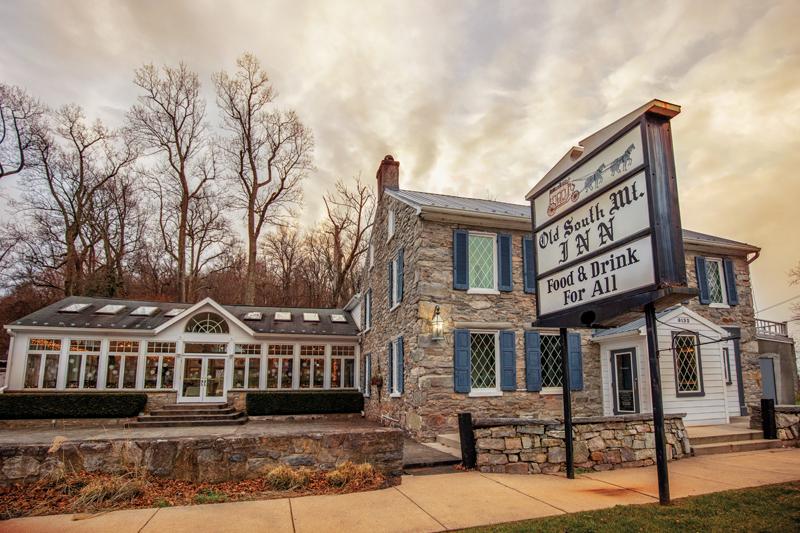 Age is relative. We measure milestones in moments, daily tasks in hours, and a lifetime in many fleeting years. So it’s hard to comprehend the relatively vast span witnessed by this area’s oldest buildings. The Old South Mountain Inn, established circa 1732, is one of those stoic artifacts, a silent observer to nearly three centuries of history, older than our nation itself.

Nestled amid towering trees along a steep and curving section of Old National Pike in Boonsboro known as Turner’s Gap, the inn seems carefully balanced at mountain’s peak. From Boonsboro proper it pops up around a stony bend, with its large parking lot immediately sloping down on the other side of the manse. Frosted cars wait where horses and wagons once rested, and roadside signs detail facts about important events and pertinent history, including the neighboring Washington Monument State Park. There’s only a hint of the area’s woodsy beauty through a blackened winter evening, but its quiet gravitas is palpable. A glowing warmth spills from the inn’s prominent windows. Then, aromatic vapors of seared meat and savory spices slice the chilled air, calling travelers in to a welcome repast.

Chad Dorsey is the current owner and chef. He started as a busboy at the Old South Mountain Inn more than three decades ago, when the place was owned by Russell and Judy Schwartz. He worked up through the ranks to executive chef before he and his wife, Lisa, decided to buy the place. They took over in December 2000 and finalized the purchase in 2001. Throughout its existence the structure has been a colonial tavern, a local pub, a fine dining establishment, a cozy inn, and a sumptuous private residence for a wealthy widow who built the adjacent Dahlgren Chapel. In its current incarnation, Chad describes the place as offering fine food in a comfortably elegant setting. It sprawls across 10,000 square feet, with room to seat more than 300 people. A 2000-square- foot stamped concrete patio gets use in the warmer months for outdoor dining and other affairs, such as weddings.

One step inside and it’s clear the place has been lovingly maintained. Seasonal decorations accent the main body of the building, which houses two petite dining areas and a “Presidents Lounge” (a.k.a. bar nook/waiting area), each with its own rustic fireplace and jewel-toned walls. Coffered ceilings, stained like rich espresso, add an aura of coziness in contrast to the expansive garden room’s soothing neutral palette. This newer section, added in 1990, features a vaulted ceiling with skylights, exposed beams, and walls of windows. It is a bright, modern counterpoint to the original structure.

The atmosphere is inviting, but it’s the food that brings people back. In an era of fast food, grab and go, eating on the run, the Old South Mountain Inn is a return to dining for pleasure, not mere sustenance. The service is attentive, and plates are thoughtfully composed. Chad says such details convey the care that goes into providing a well-rounded experience for patrons. “We garnish appetizers, entrées, and desserts because we want people to know that we care… It wasn’t premade. It wasn’t sitting in a box. Somebody was personally preparing that dish just minutes ago.”

Compositions may change by season and product availability, but this is a place steeped in tradition. Its menu reads like a roster of high society: shrimp cocktail, mushrooms stuffed with crab imperial, smoked salmon, classic beef Wellington, Maryland crab cakes, and a host of pan-seared steaks barely kissed by the heat. The Filet Mignon Lisa is a buttery-soft round of beef dressed in bleu cheese and a cabernet sauvignon demi-glace. The Honey Bourbon Pork Chops make a substantial dish, pairing thick-cut chops, frenched (bone neatly exposed), with sweet-spiced glaze and Granny Smith apples alongside garlicky mashed potatoes and a colorful mélange of fresh vegetables.

For variety, there is chicken or veal scaloppini, finished with mushrooms and Marsala and Breast of Duck Papa De Gallo roasted to medium with olive, tomato, mushrooms, and wine. A 6-ounce filet of mild buffalo is finished with green peppercorn, brandy and cream, among other meat-centric preparations. A stamped leather wine list includes 80+ varieties, from ripe German rieslings and Elk Run’s citrusy Gewürztraminer to earthy, full-bodied reds from Italy and Argentina.

When we visited, nearly half of the two-page dinner menu was seafood, including a Horseradish Crusted Salmon recipe Chad created early in his career. His voice warms with pride as he notes that it is still in demand, earning a place on the list.  Firm rockfish, its skin crisped like bacon, swims in thickened cream accented with celery, julienned strips of smoky ham, and generous lumps of sweet crab. Another personal favorite of Chad is the blackened tuna in saffron lobster sauce for its uniquely astringent spice and subtle golden hue. Saffron, harvested by hand in the early morning from a specific variety of crocuses, is one of the world’s most expensive spices. It takes about 75,000 blossoms to make one pound of it. Chad nearly glows, “I really like coming up with unique sauces.”

Specials have substance, too. On Wednesday nights, diners can get a 6-ounce Canadian cold-water lobster tail dinner, with salad, vegetable, starchy side, and warm rolls for just $20. Thursday’s special is filet mignon and Fridays are all about oysters. These delicate pillows of supple meat are served on a well-scrubbed half shell for one dollar each. For $1.50, they come baked with creamy spinach (Rockefeller) or loaded with bacon, minced pepper, and lemon zest (Casino), barbecued, or chargrilled with white wine, lemon, and garlic-studded butter. Each version begs to be drained greedily from its indentation. Order one or several dozen.

Desserts are classically indulgent, too. The house-made chocolate mousse in a dark chocolate cup sports intense cocoa flavor, without the cloying sweetness or foamy texture of a boxed mix. “It takes two people 40 minutes to make it,” notes Chad, ensuring that the egg whites are suitably fluffy and the chocolate properly tempered. Crêpes with strawberries appear as dessert and on the Sunday brunch menu. The dessert version is huge, stuffed with two scoops of ice cream and sliced berries, slathered with rich whipped cream, a drizzle of chocolate, and sunny raspberry sauce. Other standards include old-fashioned bread pudding, New York cheesecake, crème brûlée, peach Melba, and a variety of freshly baked pies and cakes, if appetite prevails.

As a family-run business, operating hours are limited and subject to change during winter. The Old South Mountain Inn is closed on Mondays and service begins at 5 p.m. most other days, with Sunday brunch ($20) from 10:30 a.m. until 1:30 p.m. Sunday dinner begins at 2 p.m. Reservations are always highly encouraged, but especially for larger groups and on holidays when the restaurant is brimming.

“We like to be prepared,” says Chad, a meticulous and dedicated steward of the establishment. “We like to have the table set and the candles lit. It’s more of a ‘wow’ factor.”

Guests seem to appreciate the effort. They readily chat with staff, admiring the decor and asking about the history of the stone building. Regulars have their favorite seats and their favorite servers, including Karen Walla, who started working there about the same time as Chad.  “We have the best servers,” he gushes in ardent appreciation.

The Old South Mountain Inn earned its reputation as a place to celebrate special occasions, but Chad encourages diners to revisit its typecasting. “Yes, you can come here and order a $150 bottle of wine, pull out all the stops if you want, but we can cater to anyone.” He nods to the specials board, “We’re not super expensive.” Most regular dinners run $23-$32. “If I go somewhere and have a great meal, I’m certainly going to go back more than once every three or four years.”

In good weather, Appalachian Trail trekkers casually refuel with pasta primavera in creamy Parmesan sauce or primal New York strip steak while umbrella-shaded patio tables beckon passers-by to stop in for a drink and appetizers. That is Chad’s vision of easy elegance.

Even mid winter’s sun-starved gloom dispels with thoughts of good food and good company. Maybe it’s time to celebrate Wednesday, just because, and venture out of hibernation. The Old South Mountain Inn will be waiting, standing resolute and ready