The Heart and Soul of WDVM-TV 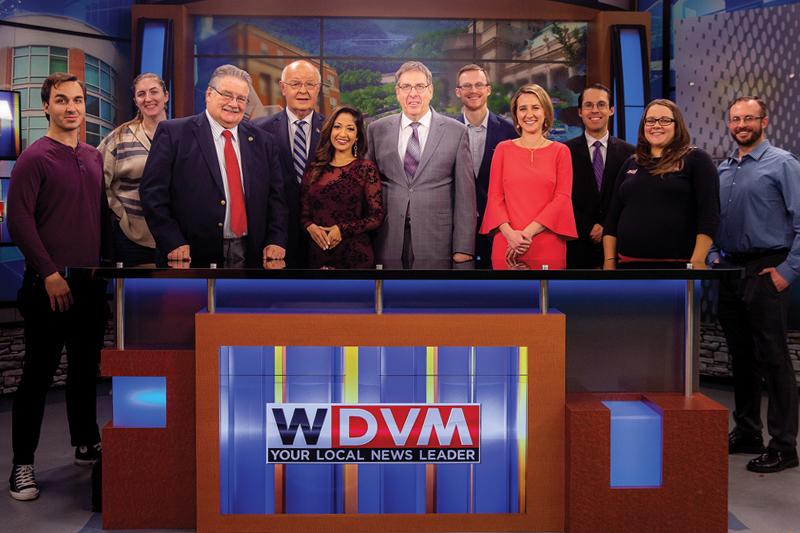 Committed to bringing local news to the community since 1970

On January 3, 1970, television news station WHAG-TV aired for the very first time. Today, almost 50 years later, the station now known as WDVM-TV is still thriving and, with it, a dedicated family of employees. From producers and anchors to reporters and sales representatives, the folks behind the station not only serve the local community with news but are the very fabric of the community.

“WDVM-TV has a staff who cares about the community not just because it’s their job, but because we live here,” says news director Mark Kraham. For more than 30 years, Kraham has worked in broadcast news, 25 of those years at WDVM-TV. “We cover what’s going on locally better than anyone else because we’re here — we’re not just coming in for a story and leaving. We’re here for the economic announcements, the city council decisions, the good news and the bad.”

Chief Meteorologist Lou Scally has been with the company for 38 years and has seen many changes in the station that was originally created to primarily serve the Cumberland Valley, from Chambersburg, Pa., down to Winchester, Va., and from Cumberland to Frederick. “Over the years, because of the cable proliferation in different communities, we expanded our footprint,” says Scally. “We’re actually in the metropolitan Washington area and, also, in Northern Virginia and Montgomery County in Maryland, so that is a big footprint increase from what we had originally. We started as a Hagerstown TV station; now we’re a regional local news provider for everywhere in Western Maryland, many counties in West Virginia, Pennsylvania, and the metropolitan Washington area, including Northern Virginia, the northern Shenandoah Valley, and Frederick and Montgomery County in Maryland.”

While coverage has increased, the staff continues to produce a product that is distinctively local. “Sometimes people forget that we offer hyper-local coverage,” says Kraham. “We bring people local high school sports, weather reports for their own backyard and news that is relevant to their specific neighborhood.”

This dedication to what is essentially home to so many WDVM-TV employees can be seen not only in the way they cover the news, but also in the way they get involved outside of their jobs. Many volunteer their time at local non-profits and are involved in projects to help promote the area. “I’ve been a part of the Save the Maryland Theatre group from the beginning and have been on the board of directors for many years,” says Scally. “The Maryland Theatre Project, the Arts & Entertainment Project, that is one of the most important things going on in this city right now. That, to me, is one of the biggest things, that’s sort of like the comeback to downtown [Hagerstown].”

In addition to employees’ personal volunteerism around the community, WDVM-TV donates valuable airtime to spread the messages of nonprofit organizations in our community throughout the year. In addition, the station celebrates the founding of their parent company, Nexstar, with a day of service called “Founder’s Day.” It’s one day a year where all stations within the Nexstar family come together and volunteer at local nonprofits. In 2018, WDVM employees volunteered at the nonprofit Horses with Hearts in Martinsburg, W.Va.

This sense of pride and support for the community is just one of the reasons WDVM-TV has a history of longevity with employees and is still a desired employer for the younger generation. Assistant News Director and Executive Producer Nick Munson has been at WDVM-TV since 2014. “I’ve pretty much done it all in the news department,” he says. “I started as web producer, then was a reporter, got experience as a weekend evening anchor, was promoted to morning show anchor/reporter and then moved up to Assistant news director and executive producer last year. Getting to build my skillset and craft the future of my career here has been very rewarding, and I feel blessed to have the opportunity to do all of this in my hometown.”

Those who have been at the station the longest have worked with many talented people — some who have stayed and others who have moved on. “I have had the privilege of working with some of the most talented people in the business,” says Alan McCurdy, senior digital marketing specialist and employee of 38 years. “Some have moved on, some have retired, but a lot of us have found a home at WDVM-TV. This TV station is unique; we compete in one of the largest television markets in the country, Washington, D.C., and have thrived. Our focus is local, local, local — no other TV station does this in our viewing area, and local people and the local business community like this and support it.”

McCurdy remembers back in the early 1980s, Hagerstown had a major snow storm and he walked to work. The walk was about a mile, usually taking 15 minutes, but in the blustery, cold snow it took 45 minutes. He was working the evening shift then and miraculously they were able to get enough people to the TV station to produce and broadcast the 6 and 11 p.m. news. There are many dedicated people who have passed through the doors of the Hagerstown newsroom, believing the show-must-go-on and it still does today.

Scally agrees. “I think we have a great family of people here that enjoy working,” he says.

He goes on to say, “I think the most fun part of this job is to work with young people. To think that it all started here at WDVM-TV, when they got their first job and learned the trade, and to stay in touch with them after they’ve moved on to other markets. It’s a big family environment.”

Technology keeps the industry exciting, especially when the world went digital. McCurdy is amazed to have witnessed video evolve from a 2-inch video tape that played on machines as big as refrigerators, to digital video that doesn’t use video tape and plays on machines you can hold in your hand.

McCurdy has also seen many positive changes in the downtown Hagerstown community over the past 39 years. A few examples are USMH, The Maryland Theatre, Barbara Ingram School for the Arts, The Washington County Public Library, and a wide variety of restaurants serving different cuisines. He, like everyone at WDVM-TV, has a personal interest in the success of the city where WDVM is located. There is something real that keeps a number of WDVM employees working here year after year at a time when people rarely make a decades-long career at one company. That dedication and commitment to making a difference right where we are is the key to a thriving downtown and it’s contagious. When other people see that you care about your community and are willing to work to make it better, it encourages them to get involved and do their part.

Reaching the local community with news for more than 40 years and continuing to bring in young talent takes a team who has passion and determination. “I love working with people who are just as passionate about the area as they are about the information they’re covering,” says Kraham. “I look at other news stations and see certain networks leaning one way or the other. We have no agenda.

I have stayed at WDVM-TV for so long because I love working with people who are impassioned about what we do — simply giving the unvarnished news and letting the public decide what they want.”

Caleb Popper, creative services director, is proud the station has been around for over 40 years, and has witnessed the growth of many changes. Technology constantly changed to keep up with the industry and broadcasting standards, as well as to better serve the viewers.  News being delivered quickly means the viewer learns about the story as it’s happening. Along with better graphics and a powerful radar, technology gives those at home a better picture to see to keep people safe and informed. The weather radar is so powerful, the weather team can see the shape of the precipitation as it’s falling, which allows them to know if it’s liquid (rain) or ice crystals (freezing rain, sleet, snow, etc.). WDVM-TV has invested in this technology, because the safety of the viewers is crucial and local residents want to know what’s happening with the weather in the area.  Reporting the weather is more than just simply knowing what’s going on. Concerns such as “Am I in danger?” “Should I be out on the road?” “Are my kids going to be safe at school?” are real fears that are taken seriously by the news and weather team. The WDVM-TV news and weather group cares about its viewers. Popper says, “We all have big hearts here, and with everything we do on the air, online, and on our social media platforms, we do it for you. It sounds corny, but it’s our business.” Popper believes the WDVM-TV family feels how special the viewing community is and before anyone is in front of the camera, they are thinking about the receiving end and how the news and weather is going to impact people. The heart, soul, and passion are shown every day in news meetings, around the office, and in the studio before going live. The heart of WDVM-TV, the part that’s remained constant, hasn’t aged or changed, are the people — working hard every day to bring the area truly local news, weather, and sports.