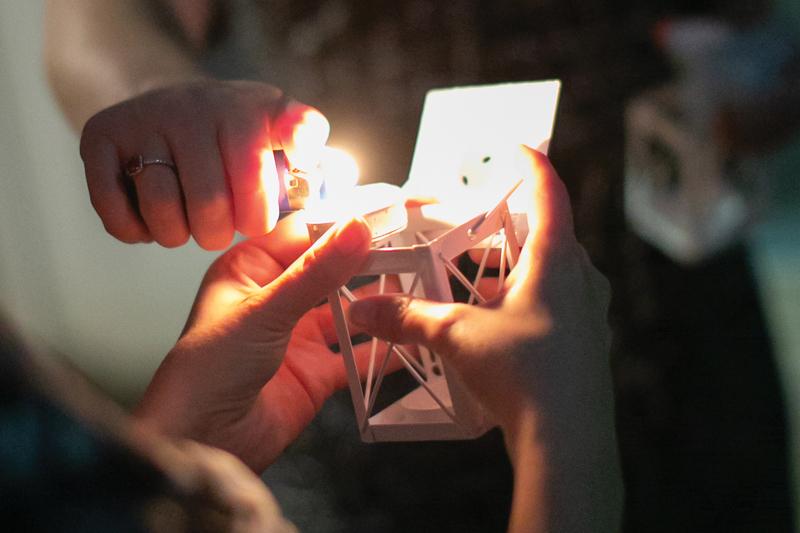 Self-help support group provides comfort to many who grieve the loss of an infant.

by Lisa M. Gregory and photos by Turner Photography Studio

The loss was sudden and devastating. One moment Wendy Hite had been playing with her six-week-old daughter, Cinnamon. “She was laughing and smiling,” says Hite. The next moment Cinnamon would be gone.

Hite, along with her then-7-year-old son, was driving back from Florida where they had gone to visit family and introduce baby Cinnamon.  Her husband had remained home due to work. Hite remembers stopping to take a break at a rest stop on the long drive home and “feeding Cinnamon and changing her diaper,” she says. Then, she played with her daughter a bit before putting her back in the car seat to continue the journey.

Not long after, Hite decided to stop at a convenience store to get her son something to eat.  “When I looked back at her,” says Hite, “her color was wrong. I grabbed her. She was not moving.” Hite ran into the store asking for help. “I laid her on the counter and did CPR while someone called 911,” she says.

Cinnamon was rushed to a nearby hospital. “She was warm,” says Hite. “Still warm.”

Hite would later be told Cinnamon was a victim of SIDS. Her baby girl was gone.

She was on a mission. “I’d look for obituaries of a lost infant,” she says. “After the funeral, days or weeks later, I’d call them and see if they needed to talk. And they always needed to talk.”

That effort of reaching out to others would eventually become Labor of Love, a self-help support group for those who have experienced a miscarriage, stillbirth, or newborn loss.  The group, which has existed for 31 years, meets the first Wednesday of each month.  While Labor of Love is its own entity, the support group “is a branch of what our perinatal bereavement program entails,” says Evelyn Kloos, registered nurse and perinatal bereavement coordinator at the Meritus Medical Center.

There is a comfort in sharing a loss with those who understand it, a loss of what could have and would have been, says Hite.  “You don’t see the first Christmas or the first steps,” she says. “You don’t hear the first words or get to wait for them that first day of school, or see them grow up and marry and have children of their own. These are all the dreams parents have, and they are taken away.”

“People told me, ‘This happens. You need to move on,’” says Renee Ginn, who lost her daughter Catherine six years ago and now leads the Labor of Love group. “Or, ‘You will have more kids.’ But that doesn’t replace the one I lost.”

The group is open to all those struggling with such a loss, including patients from other hospitals and even other hometowns.  “Everyone is welcome,” says Ginn. In fact, she says, the group not only includes mothers and fathers, but other relatives as well, from aunts and uncles to grandparents.

While Labor of Love has been there for hundreds of grieving families through the years, a meeting may have a single person attending or as many as 15 at any given time, says Ginn.  But the impact can be long-reaching and long-lasting be it one or 15. “Recently, I had a mother who showed up and had not been to a meeting in 28 years,” says Ginn. “She was the only one there that night. It was her son’s birthday, and she was having a hard time. She was looking for comfort, and she and I talked.”

Some group members are more ready to express themselves than others. “One mother can barely say her son’s name,” says Ginn. “And she’s been coming to the group for two and a half years.”

However, “Just listening to other stories and knowing that each person has walked that same path is so important,” says Kloos.  “And when you are ready to talk about your baby, the group will be there for you.”

Besides its weekly meetings, Labor of Love also holds special events. This past October, in recognition of Perinatal Bereavement Month, a candlelight memorial service was held in the hospital’s newly-created perinatal bereavement garden. And since it was first formed, the group has held a candlelight memorial service during Christmas time with a huge attendance year after year. This year’s service held at Trinity Lutheran Church had the theme of “Your wings were ready–But my heart was not.”

Cindy Stevens has attended the ceremony every year since she lost her daughter, Sara, in 1988. “It’s one way I can honor her and her memory,” says Stevens. “It’s her special day.”

That ability to remain connected to your child is extremely important, says Ginn, whose daughter, Catherine, was stillborn. And as she eagerly talks about her own daughter, she pulls out a photo of Catherine dressed in a yellow flowered dress and yellow hat. The photos were taken on a day when Ginn was saying goodbye even as she was saying hello to her daughter.

“I wanted photos of her feet, hands, ears,” she says. “So I could study over them later when she was gone. I was looking at them just the other day, and she has been gone for six years.”

“I remember right after I graduated from nursing school in 1970, there was a baby born that did not survive,” says Conrad. “The doctor decided the mother should not see it. The father made the arrangements for the funeral. The baby was taken from the hospital and buried, and everything was done before the mom left the hospital. She never got to see the baby, hold the baby. There was this belief that you didn’t talk about it. It was done.”

She added, “I found that incredibly sad.”

Today at Meritus, for example, parents may keep the baby in the room with them for the length of their hospital stay. They are encouraged to interact with their baby as much as they want to and need to. Ginn, for one, clings to the short time she was able to spend with her daughter. “I got to hold her, bathe her, rock her,” says Ginn. “I got to be a mother.”

The Perinatal Bereavement Program offers guidance, information, and support as families navigate the grieving process even after leaving the hospital.  And Labor of Love is a big part of that, says Kloos.  “What they do is so important,” she says.

And as such, decades after a grief-stricken mother reached out to others who were suffering, Labor of Love continues to touch lives. “I have always felt like God gave me this ministry,” says Hite.