It Is A Wonderful Life 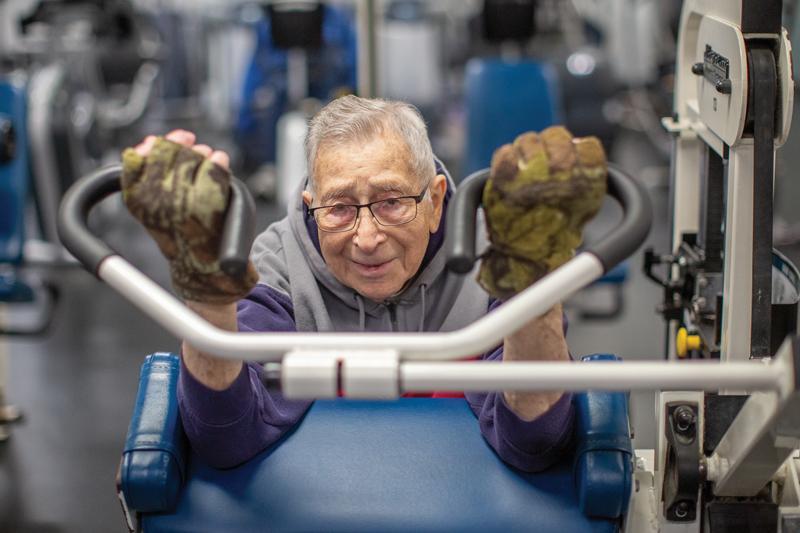 One day a few years ago, I ventured into the Hagerstown YMCA’s boxing room determined to take on and master the speed bag.  After several lame attempts, a kindly, older gentleman donning sparring gloves peered into the room and noticing my obvious (and amusing) struggles politely asked if I wanted some speed bag pointers. I enthusiastically agreed and was awestruck by the gentleman’s agility and quickness as he struck the speed bag with a well-practiced, rhythmic cadence. He patiently showed and explained to me how to hit and offered me several tips. We chatted a bit and when I left, I assured him I would keep trying.

A couple days after my experience, I discovered my speed bag instructor was well into his nineties.

Lo and behold, my speed bag instructor of a few years ago turned out to be the Y’s very own beloved “Mr. Ben” Chlebnikow, who is 99 years young and visits the Hagerstown YMCA daily several times each week.

Born in Paterson, New Jersey in 1919, “Mr. Ben” shared his grandfather Joseph and father Abraham both emigrated from Russia during Czar Nicholas II’s reign and arrived in the U.S. at Ellis Island.

“My grandfather signed papers stating his allegiance to the U.S.,” “Mr. Ben” explains, proudly showing a copy of his grandfather’s signed naturalization paper. “Back then, dual country citizenship was not offered.”

“Mr. Ben” credits his longevity to his ability to overcome and manage the many changes he experienced in his life, including surviving the Great Depression, serving his country overseas during World War II, dealing with several losses of loved ones, including being the sole survivor of his parents and siblings, as well as becoming a widower twice over and surviving his eldest son Jeffrey. “You just do what you must to continue on,” he explains.

During his youth, the Chlebnikow family endured some difficult times. “Mr. Ben’s” mother Anna passed when he was just seven years old in 1926. His older sister Eleanor then took over her late mother’s household responsibilities, which included raising “Mr. Ben.”

What’s more, the family store was wiped out during the Great Depression and “Mr. Ben” took on work to help his family. “I lived and worked on a farm during my early high school years,” “Mr. Ben” shares. During this time, he helped the farmer purchase a horse for plowing the fields and discovered afterwards that it was blind. “But he got the job done,” he shares, shaking his head in amusement.

“It was hard work and clean living. I had to get up at 4:30 every morning to milk the cows before school and in the evenings after homework. While I learned a lot about different breeds of cows and horses and how to grow hay, it just wasn’t for me,” he recalls. “In those days, holes in your pants were free. You didn’t have to pay for them like you do today.”

“Mr. Ben” graduated high school and went to vocational-technical school to learn to read a six-inch scale and one-inch micrometer, two requisites for working at Curtiss-Wright, an airplane engine manufacturer in Woodbridge, New Jersey. He was hired as a machinist there in Sept. 1940.

“Mr. Ben” was then drafted as an aircraft technical mechanic in the U.S. Army in 1943. His orders were changed without an explanation to serving a 13-month infantry stint in Germany under General George S. Patton. “I saw him in person two times during my service,” he recalls. “He always wore the pearl-handled revolvers Marlene Deitrich gave him. He was quite proud of them.”

His passion for engines and machines led him to further his education during his military service.

He returned to work at Curtiss-Wright in New Jersey after an honorable discharge, married, and had three sons. “I was happy to be alive. In war you see many changes. We are truly blessed in our country and we often don’t realize it,” he shares.

In March 1960, “Mr. Ben” was laid off from Curtiss-Wright after nineteen-and-a-half years. “I had a growing family to take care of so I lost no time looking for another job,” he shares.

Just one week after being laid off, he was hired by Mack Trucks in Plainfield, New Jersey. “I didn’t even collect unemployment,” he states.

Shortly after being hired, Mack Trucks informed “Mr. Ben” that the plant was relocating to Hagerstown, Maryland. “I asked them if that meant they still wanted me, to which they replied ‘absolutely,’” he remembers.

Mack offered him a position in the twelve-person Engineering Department. “Mr. Ben” and his family moved to Smithsburg for one year and then to Hagerstown during Labor Day weekend in 1961.

Working toward the Future

“We had no calculators or computers when we were doing this,” he shares. “I saw new technologies come into being and researched how robotics could be utilized. I enjoyed going to work at Mack – it was a challenging position. Every day offered me something different,” he reminisces. He stayed with Mack and achieved certification as a manufacturing engineer, retiring in January 1986.

It was the beginning of retirement when “Mr. Ben” became a member of the Plaza Hotel, where he enjoyed swimming.

“Mr. Ben” enjoys a fitness routine that incorporates workouts on the speed bag, weight machines, and swimming laps using the backstroke in the Hagerstown YMCA’s swimming pool. “It takes me about three-and-one-half to four minutes to swim down the lane and back,” he shares. He works out a total of 40 minutes each visit. “It makes me feel great and the steam room helps keep the blood circulating. If I don’t have a doctor’s appointment, you can find me at the YMCA,” he laughs. He further explained that if you don’t catch him at home, he is at the Hagerstown YMCA.

In September, the Hagerstown YMCA honored “Mr. Ben” with a surprise gathering in the facility’s main lobby during the organization’s Membership Appreciation Month. “I was very touched and honored. There were about 50 of my Y family members gathered there at the time. All the folks at the Y know who ‘Mr. Ben’ is,” he fondly recalls.

When asked to share some wisdom, he thought carefully before speaking. “I always went with the trend at work and never got ulcers. Make work-related decisions as if you own the company and you’re guaranteed to contribute to its overall greater good. Watch your diet, especially sugar and salt intake and use spray butter instead to lower your salt and fat. Do your best with your family – I raised five boys, each one graduated college and achieved successful professional careers. There’s so much good in the world – it’s all right there at your fingertips,” he concludes.