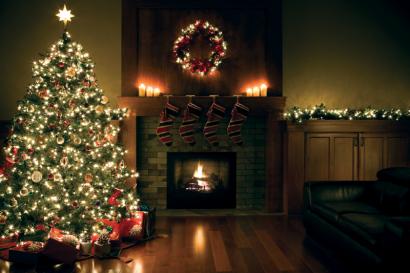 Why Some Folks Do Live Christmas Trees and Why Some Do Artificial.

Tim Luipersbeck grew up with live Christmas trees and couldn’t see himself ever letting go of that tradition – until a couple of years ago.

Since he was a kid, he and his family would go out to Long Meadow shopping center each winter and pick out the tree that called to them.

“I loved getting a new one every year. I loved that woody spruce scent. So I stayed with live trees once I was on my own. Until I got pets,” he laughs.

Tim’s two rescue cats are playful and sweet, but a little wild. They loved climbing the big, fat pine tower in the living room of his downtown Hagerstown duplex. He’d come home after work to find them nestled in the branches, with the tree on its side. There were needles everywhere, and the water basin was tipped and empty.

“So I switched to an artificial tree. But not the kind with pipe cleaner wire needles. I got one with brown and green mixtures because it had to look authentic,” he says.

Tim lights pine-scented candles and hangs “scent-cicles” from the branches for that woody, holiday smell. The tree’s pre-lit, so he just pulls it from the box and adds ornaments for the final touch. That’s knocked off a couple of hours of setup time, a tradeoff he likes.

Tim’s new tree is different, but he continues building on happy holiday memories, as before. Still, he says, “Maybe one day I’ll have one cat-free room for a live tree too. I’m not opposed to having two of them.”

Whether to go with a live or artificial Christmas tree is a personal choice that many people have definite ideas about.

Some like artificial because they’re cheaper and last for years. There’s minimal setup or work once it’s time to take them down. And they tend to be more customizable, coming in many sizes, shapes, and colors.

For others, nothing trumps natural. They love the fresh fragrance. They want a renewable resource; a few seedlings are usually planted for each harvested tree. Some people even buy evergreens with root balls and plant them after Christmas.

For some, foraging through a wooded lot in search of the right one is invigorating.

The thrill of the hunt is a big part for Tara Sutton, an adventure she had with her parents and siblings as far back as she can remember. She and her husband, Mark, have kept the tradition going, even in their early years together when being able to afford live meant going with a tabletop tree.

“I do like that it’s more environmentally friendly. The city picks it up for recycling and it’s turned into mulch,” says Tara.

The tree that lights the family room of their Hagerstown townhouse stirs memories from when her kids were little. One of the best is of her twin boys, Luke and Conner, adding their decorating touch, with all the ornaments clustered together two-and-a-half feet from the base — as high as they could reach. Big sister Olivia would put the star on top, and still does.

“I’ve made ornaments with our kids’ handprints. Now that their hands are too big to do this, I’ve evolved to fingerprints,” says Tara.

Last year she made reindeer from their thumbprints that she put on glass decorations — one print for the body, one for the head, and she painted antlers and legs.

The Suttons’ living symbol of Christmas is like a memory album, only with branches and a trunk.

“We have all kinds of ornaments with meaning. Like a picture of us on our honeymoon, and one of the Empire State Building to remember our trip to New York and going to the top.

“My aunt gave us an ornament after my cousin died. It’s a glass purple heart, as purple was her favorite color. She gave them to all the family so we would have her memory at Christmas,” says Tara.

Over the years, tree trends have swung radically. The post-World War II era saw the beginning of the plastics boom, and with that came the earliest artificial evergreens.

Then in the late 1960s, the Peanuts gang got a “real” tree, declaring on national television that this was a symbol of what Christmas was about. Coincidence or not, soon after the “Charlie Brown Christmas Tree” debuted, natural evergreens made a comeback. And the fake bling started to lose, well, bling.

But as living trees regained more momentum, plastic ones began taking on a similar look, with thick branches and needles that seemed almost real. With advancing technology, trees have come online where you have to look twice to know: Is it live? Or is it plastic?

Hagerstown resident Tracy Mumma and her husband, Howie, have an artificial tree.

“It’s what I grew up with and I stuck with it because there is no limit to my enjoyment. If I want to put it up before Thanksgiving, I can. And I could have it up till February, which I actually have before,” she says. It’s how she holds onto that holiday feel a little longer and she loves the white twinkling lights.

“I’m somewhat of a perfectionist, and if there’s a limb out of place I can make it uniform and symmetrical,” says Tracy.

Her tastes have changed from years back when she did a scheme of peach, orange, gold, and white, with cascading ribbons, gold sprigs, thin glass bulbs, crystals, and clear beads.

“On the top is a picture of my dog, Barkley, in a doghouse ornament wearing his Santa hat because he was my angel and passed in 2013,” she says.

Tracy recalls another long-retired tree. It was one she dragged from her parents’ home to her husband the Christmas before they married. Even though it was an old hand-me-down with a patchwork of ornaments thrown together, it was special.

“That tree was still up when we got married the following May. All our wedding gifts went under it. The happiest day of my life was my wedding day. But the happiest season is the holidays, and these two times came together,” says Tracy.