Hagerstown and the Great War 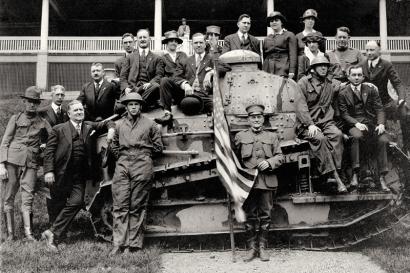 By Stephen R. Bockmiller and photos by Turner Photography Studio

The American people have a love affair with commemorating historic events in 10-, 25-, and 100-year increments. America commemorated the sesquicentennial of the Civil War from 2011 to 2015 and the bicentennial of the War of 1812 from 2012 to 2015. With the arrival of the 100th anniversary of Armistice Day and the end of World War I commemorated on Nov. 11, this year will be no different.

Unique perhaps to Hagerstown are the facts that 1) World War I occurred during Hagerstown’s ascendancy as a manufacturing center; 2) many of our more architecturally significant buildings are from this general period; and 3) our city has more than its fair share of monuments and features commemorating America’s veterans of the “Great War.”

So, as we go about our daily lives, we are actually surrounded and affected by evidence of that critical time in our history. How often do we drive on Wilson Boulevard? Attend an event at Morris Frock Post of the American Legion? Or pass by the city police headquarters?

With a population of about 28,000 people, Hagerstown was the second largest city in Maryland behind Baltimore in 1917. With its advantageous geographic location and such a large population, Hagerstown carried significant political clout in Maryland business and government. Hagers-tonians Louis McComas, Alexander Armstrong, and William Preston Lane Jr. earned the statewide offices of United States senator, attorney general, and governor, respectively, in the years before and after the War.

The year 1918 was one most Hagerstonians would have preferred to have forgotten, for the most part. In February, Hagerstown Police Chief George Fridinger was killed in the line of duty when his vehicle was broadsided by a trolley car. Shortages of many goods, from coal to sugar, sent shock waves throughout the economy and residents’ standard of living. The Washington County school system was challenged by the loss of numerous teachers who volunteered for (or were drafted into) military service. Due to a lack of available players and the community’s focus on bigger priorities, the Blue Ridge Baseball League was restructured by league president J. Vincent Jamison Jr. to include only four teams. Yet the season ended early. It was not until 1920 that league operations resumed.

Local residents dreaded opening the news-paper as news of loved ones from around the county being killed, wounded, or ill due to their service overseas would be a regular feature in the newspapers. In the fall and winter of 1918, Hagerstown – like the rest of the nation – was hit by the Spanish Influenza pandemic. The sight of residents walking down the city’s streets wearing masks was commonplace. So many people were sick that the Washington County Hospital was overwhelmed. The Western Maryland Railway arranged for the Hagerstown Country Club (now the Morris Frock Post of the American Legion) to be converted into a hospital for railroad workers. Many sufferers were cared for … and in some cases died … having never left their homes.  It was a busy time for the grave diggers at Rose Hill Cemetery. Funerals were lonely affairs, as most people were caring for the ill if they themselves weren’t sick.

Nonetheless, Hagerstonians carried on. Life goes on, even during a major war. In spite of consumer shortages, the local economy, fed by war contracts, boomed. With local industry converted to war production and with the city a hub for several railroads, employment was plentiful and lucrative.

With Congress’ Declaration of War, Maryland’s National Guard was mobilized for service overseas. Hagerstown’s Company B – under the command of Captain Lane – packed up and headed to the front. With no homefront military  available for domestic service, the state created the Maryland Home Guard – a temporary substitute for the National Guard and forerunner of today’s Maryland Defense Force. Comprised of older men and those not fit for war service, the Home Guard served domestic needs until guard units returned from Europe. Seventy-two-year-old Capt. George Fisher – who was compelled to retire from the National Guard in 1912 due to age restrictions–was called back into service as a drill instructor. Capt. Fisher is one of only a tiny number of Civil War veterans who are known to have served in any type of uniformed role in the military during World War I. The Great War would be his fourth tour during a conflict, having also served in the Ute Campaigns in Idaho (1878-79) and commanded Company B during its mobilization for the War with Spain (1898-99).

According to the Office of the Adjutant General of the Maryland National Guard, 2,130 Washington Countians served in the Great War – including 166 sailors and Marines, and seven nurses.  Of these seven nurses, Zazel Hollenberger, Emma Eader and Emma Hoffmaster rest in Rose Hill Cemetery. Thirty-five county residents were killed in action. An additional 33 died of wounds, illness, or in accidents. The African-American community contributed 150 men to the military to help defeat Germany. Four of these “sable soldiers” did not return to a nation that would not let them sit at the local lunch counter for almost another half century.

With the Nov. 11, 1918 armistice, plans were made to return most of the war-weary combatants to the United States. The men (and several women) returned to Hagerstown and Washington County, hung up their uniforms, built lives and families and continued to build the community. These men worked at Pangborn Corporation, Moller Organ Works, and many lesser known firms. Capt. Lane came home with the rank of Major. He later went on to be elected to one term as Attorney General of Maryland (1931-35) and one term as Governor of Maryland (1947-51). Like E. Russell Hicks, these veterans also taught in the county schools. Silver Star and Purple Heart recipients, such as Lt. Aldine Lakin who founded the Hagerstown Lumber Company, started businesses and headed civic groups and charities in the community. African-American veteran Clarence Monroe returned to take up the trade of carpenter, and for many years helped maintain his church – Tolson’s Chapel in Sharpsburg.

But over the years, the veterans answered their final roll calls, one by one. There are too many to name here who rest in our local cemeteries. Of over 33,000 who served, America’s last female veteran of the war, Yeoman (F) 2nd Class Charlotte Louise Berry, USN (later Mrs. John R. Winters) passed away at the Fahrney-Keedy Home and Village in Boons-boro in 2007 at age 109 – 88 years a member of the American Legion. A civilian secretary at the Naval Gun Factory in Washington, she has been credited with inspiring Secretary of the Navy Josephus Daniels to permit women in the U.S. Naval Reserve following their interaction in a 1916 meeting. Berry put actions behind her words and enlisted soon after the program was created. The last American veteran, Army Cpl. Frank Woodruff Buckles, closed out the national story when he passed away in nearby Jefferson County in 2011 at age 110.

The Great War Around Us

There are many buildings that survive from the Great War period around town, not to mention several war memorials. There are too many surviving buildings in the city’s historic districts to name that Hagerstonians saw as they headed for the train station to serve in a war that offered them an uncertain future. The memorial to Washington County’s war dead in front of the Circuit Courthouse includes a panel with the names of those who did not return. During the Great War, the Hagerstown Police Department on Burhans Boulevard was the freshly completed Western Maryland Railway station, only four years old at the time and the state of the art of passenger rail travel. In front of this building is one of three monuments the employees of the railway erected to honor their coworkers who served in the war. (The other two are in Cumberland and Union Bridge.)

Completed in the years after the war, Memorial Boulevard was dedicated as a memorial to the fallen, and Wilson Boulevard was named in honor of Woodrow Wilson, our wartime president. A monument to Wilson can be found on the east end of the boulevard, at Frederick Street. A captured German cannon was installed on the west end of the boulevard, near Virginia Avenue, which stood until melted down in a World War II scrap metal drive.

Looking for an immersive Great War environment? Take in a show at the Maryland Theatre. Constructed in 1915, it was only two years old when the war started.

The now unassuming building at 901 Pope Ave., currently owned by Jeff Crampton and occupied by a number of local businesses, was the home of the Maryland Pressed Steel Company. In this building, small 37mm cannons were assembled by the Poole Engineering Company, then taken to a proving ground near Clear Spring and fired to ensure they were safe. At the same time, aircraft design pioneer Guiseppe M. Bellanca used the building to design and build a biplane for military use. Only a handful of “Bellanca CD” planes were produced before the war ended. Those that were constructed were tested at Doub’s Meadow Field – the site of the present-day South Hagerstown High School.

Walking through the door of the Hagerstown Country Club, you no longer need fear catching the dreaded Spanish Flu from the railroad workers that were cared for there. It has long been the home of Morris Frock Post #42 of the American Legion. This post itself is a World War I memorial as it is named for Hagerstown Marine Maurice E. Frock, who gave his life for his country in the Battle of Bellau Wood in June 1918. He was honored for heroism not once, but twice, with the nation’s third highest award for valor – the Silver Star Medal. The French government similarly honored Frock with its Croix du Guerre Medal. A communications runner, Frock was killed in a German artillery barrage. His remains were not recovered, but his name appears on a wall of honor in the American cemetery at Aisne-Marne.

With the arrival of Veterans Day in 2018, the centennial commemoration of the Great War comes to an end. But those who are in Hagerstown on any given day can feel surrounded by the influence of the period, and the sacrifices and achievements of those who fought in it, and those who returned to build our community to what it is today. With the end of the centennial observance, America will now likely turn its attention to the next arriving anniversary: the sestercentennial (250th anniversary) of the American Revolution, which will begin in 2025.