I Believe in Santa Claus 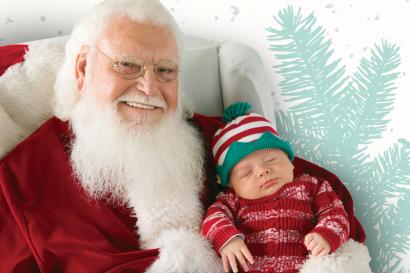 Santa “Bud” Kline Brings the Wonder and Magic of Christmas to Hagerstown Children.

By Lisa Gregory and photos by Snips and Snails Photography

Virginia may have had her doubts. But the folks in Hagerstown and the surrounding area never have. Yes, Virginia, there is a Santa Claus and his name is Floyd “Bud” Kline.

For the past 52 years Bud, who is now 81 years old, has played the part of Santa, visiting homes, community events, hospitals, churches, appearing in parades, and even operating his own Santa Village for many years along with his wife, Doris, who is, of course,  Mrs. Santa Claus.

“I just can’t imagine Hagerstown without Bud Kline as Santa,” says Tammy Tagg, who grew up sitting on Santa’s lap, as have her own children, and remembers him visiting her family’s home at Christmas.

Oddly enough, the role that would define him began as a way to sell Christmas trees at a gas station he owned in 1966. One of his visitors was a little boy with special needs who clung to him, saying “ho, ho.” “He couldn’t talk, but he could say ho, ho,” says Bud, who still becomes misty-eyed at the memory.

It was a life-changing moment for Bud. Since then, he estimates that “over 500,000” children have sat on his lap during the last five decades, including generation after generation of families. “I’m on the fourth generation now with some families,” he says proudly.

Even the children who are not initially thrilled by the idea of interacting with a stranger in a white beard (yes, it’s real) and red suit warm up to him. Taking his time and concentrating on each child individually, he can turn tears and frustration into smiles and trust.

“He’s so patient and kind,” says Nicole Pellegrino, who once sat on his lap as a little girl and is now using him at her photography studio to pose for holiday photos. “He sits down with each child and concentrates on what they are saying. They feel love.”

“He has this magic with children,” agrees his daughter, Debby Kendrick.

And despite a recent health scare, Bud will be back at it again this Christmas, although at a reduced pace and not the 120 to 140 or so events and 12-hour days he has been known to do in the past.

“It’s such a part of his life,” says Tammy Mowery, who as a little girl lived up the street from Bud. Along with her siblings and friends, they would ride their bikes over to his house and “spy on him to see if we could see his sleigh,” she says.

Adding, “I almost think he believes he really is Santa Claus.”

And he wouldn’t be the only one. Following are just a very few of the stories of those who have experienced the magic of Santa Bud.

Five-year-old Gretchen was having a bad day. Out shopping with her mother, she was not enjoying herself. “It was early December and we were in Big Lots,” recalls her mother, Amy Stenger. “She was hungry and tired. And, she was not behaving well.”

Amy informed her daughter that Santa was watching her, so she better behave. “She didn’t believe me,” says Amy. In fact, “She shouted, ‘No, he isn’t.’”

Then as the two left the store Santa Bud was there, sitting in “a red vehicle,” in front of the store, Amy recalls.

“I said ‘I told you he was watching you!” says Amy, smiling. However, little Gretchen, who is now 18 years old and just headed off to college, would not be convinced. She informed her mother, “He’s not the real Santa!”

Then Santa Bud called out to her. By name. “He heard me say her name and picked up on it,” says Amy.

According to Amy, Santa Bud then proceeded to pull out his driver’s license with his picture, and the name on his license was Santa. Gretchen was convinced.

“She truly believed that he was Santa,” says Amy. “We didn’t have much trouble from her the rest of the year.”

Before visiting Santa at Christmas, Lucy Austin had discussed with her five-year-old son, Sean, what he wanted that year. He was especially inclined to ask for a Tonka helicopter, his mother remembers.

But the visit didn’t go as planned.

“Sean asked Santa for a pair of pajamas for me,” she says.

And nothing for himself.

Lucy was out of ear shot and didn’t hear Sean’s request. Then, “Santa very loudly said, so I would be sure to hear, ‘Are you sure all you want is a new pair of pajamas for your Mom?’”

Sean, who is now 28 years old and a Benedictine monk, stayed strong on his request and refused to ask for anything else. Not even the Tonka helicopter.

“It was very heartwarming that Santa made sure I heard it,” says Lucy. “As a single parent, Santa didn’t know that that was my only opportunity to hear that. It meant a lot.”

Santa was good on his word.

“That Christmas morning, my son wasn’t interested in anything under the tree but my present,” says Lucy. “He knew Santa would come through for him. And Santa did indeed give me a new pair of pajamas, along with many gifts for my son.”

Below are excerpts from a letter written in 2012 on Santa Bud’s behalf.

My name is Alan C. Artz II. I am autistic, a transplant patient and 26 years old. I am a big movie/trivia buff and love the movie, “Miracle on 34th Street,” about your legendary store and Santa Claus.

I know another distinguished Santa – his name is Floyd “Bud” Kline. He is a local hero and loved by many for his portrayal of Santa Claus. He has made an extraordinary effort to visit our community’s poor children, sick children, and disabled children. His generosity and compassion exemplify the true nature of “the one and only” Santa.

Every year since I was two years old, Mr. Kline has come to my home on Christmas Eve to bring me a small gift. I still delight in his visit – it means the world to me.

In 2003, I traveled to New York to see your renowned Macy’s parade. It triggered my secret wish – to have my Santa, Mr. Floyd “Bud” Kline, be your Macy’s Annual Thanksgiving Day Parade’s Santa!  Giving this honor to such a wonderful man is a perfect way to thank him for all he has done to make Christmas special for me and thousands of others.

Sandy Goltz’s granddaughter, Rebecca, wanted to see Santa. And Sandy was deter-mined to make it happen. “She would get so excited when she saw Santa on television or in a coloring book,” says Sandy.

But Sandy had her concerns. The little girl, who was “three or four” at the time, was hear-ing impaired and had difficulty communicating. Sandy would not be deterred though.

And as she and Rebecca waited in line for Rebecca’s turn with Santa, Sandy was glad that they had come. “She couldn’t take her eyes off of him,” says Sandy.

Once they approached Santa Bud, Sandy explained Rebecca’s situation. “There was this compassion in his eyes when I told him,” recalls Sandy.

Sandy isn’t quite sure if there were actual words spoken between the two or just smiles and an understanding shared. But, no matter, a connection was made.

“He took his time with her,” she says. “It was so touching.”

As they left, “her eyes were sparkling,” she says of Rebecca, who is now a 30-year-old nurse. “She was so happy. She kept saying to me in sign language, ‘Thank you, thank you, thank you.’ He made her dream come true that day.”

Sometimes All You Need is a Visit from Santa.

Kayden Castle wouldn’t eat. And as a result, from the time he was 9 months old to 2 1/2 years old, he didn’t grow at all, says his mother, Kelly Castle.

“We were still using a baby carrier for him for the car,” she says.

Diagnosed by specialists with infantile anorexia, a lack of appetite, Kayden was finally put on a feeding tube to make sure he got the nutrients he so desperately needed.

Kayden’s father, Gary, remembers running into Santa Bud at the bank shortly after Kayden got his feeding tube.

“He was telling me about his little boy, and he had tears in his eyes,” recalls Bud.

So, Santa Bud went to the Castle home and paid Kayden a visit.

“This was in the summer,” says Kelly. “But he was in his complete costume. I’m sure it wasn’t comfortable with the heat.”

Never mind that. He had a message for 3-year-old Kayden. “Santa wants you to try to eat.”

“As you can imagine, it had quite an impact,” says Kelly.  “Every time he didn’t feel hungry we would tell him Santa is watching you. It helped.”

Kayden is eight now and doing better. And the family remains thankful for Santa’s visit that day.

“We are so grateful that he would do something so special for our child,” says Kelly.