History and Hospitality in Sharpsburg 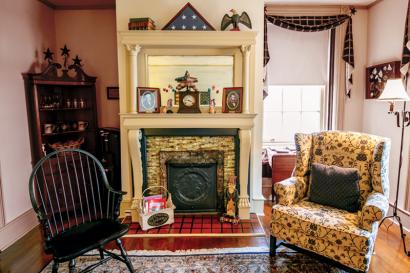 High on a hill overlooking Antietam National Battlefield is the Inn at Antietam, a Victorian bed and breakfast with a sweeping veranda that entices guests to put aside all stress and relax under the tall maple trees.

In the center of Sharpsburg is the Jacob Rohrbach Inn, a house that dates back to the 18th century, well before the 1862 Civil War battle that put Sharpsburg into the history books. The two inns are the only bed and break-fast inns in the town of Sharpsburg. Nearly 400,000 visitors each year visit the battlefield for which Sharpsburg is known, but lodging in the area is sparse.

Visitors lucky enough to book rooms at the two inns enjoy the quiet feel of life in this small town, which has changed little over the years despite the battlefield. The Inn at Antietam overlooks the national cemetery, while the Jacob Rohrbach Inn has a few bullet holes, reminders of the terror residents endured.

At the Inn at Antietam, owners Miriam and Will Cunningham are in their third year. The couple met in Washington, D.C., and married in Will’s native England in 2009. In 2016, after 20 years of living and working in D.C., they wanted to explore something different. They learned the Inn at Antietam was for sale, and they bought it in March 2016. On July 1 of that year, after painting and freshening up the old home, the inn opened to guests. The previous owners, who were getting older, had been winding down, and guests were eager to stay in the redecorated inn.

Although not built during the battle that brings so many visitors to Sharpsburg, Miriam wonders if the Victorian home was built to house soldiers coming to visit the battlefield in the late 19th century. The home’s location near the national cemetery and its large, airy rooms would have been welcoming to veterans. Its welcoming presence, up a series of brick steps now lined by boxwoods, continues today.

Whether or not the 17-room home hosted old soldiers, it now offers pleasant accommodations for travelers. Visitors park to the side of the inn, under tall maples that shade the patio. Rustic wrought iron furniture offers seating amid bird feeders and potted plants.

A hammock sways lazily in the breeze. Beyond the patio is a meadow, through which the couple one day hope to put a walking trail. Today, it’s a peaceful view for visitors as they read or chat on the patio.

The wraparound porch offers more outdoor seating on comfortable wicker chairs and views of the battlefield. Ceme-tery Hill, where the house is located, offers a good vantage point to see the farm fields that make up much of the battlefield.

The house has four guest suites. All have private bathrooms. Two of the suites have sitting rooms with additional bedding, one has a loft with a bed and one has a separate dressing room.

Miriam brought her culinary talents with her to the B&B, and guests are treated to quiches, egg casseroles, muffins, scones, biscuits, or other breakfast delights. Tea is brewed using loose tea leaves and served in a teapot, just as it would be in England. For those who prefer it, coffee is also available. The Cunninghams keep an informal count of eggs served and cups of coffee brewed, along with a few other quirky statistics. So far, inn guests have consumed, in some way, 140,643 eggs and 9,745 cups of coffee. Added to that are 6,459 pillows fluffed and 1,532 history lessons given.

Miriam was a history major, although she’ll tell you her specialty is Germany’s Weimar Republic, not the Civil War. She moved to D.C. to study history in graduate school, and stayed to work in grant writing for Johns Hopkins University. Will came to D.C. from England, and the two met through their shared passion for World Cup soccer. When they bought the inn, Miriam gave up her job to run the inn, while Will kept his job as program director for a conference company.

When the couple decided to look for a B&B, friends wanted to make sure the couple knew what they were getting into. They knew. Will recalled his family often hosting guests during festival season at his home in the south of England. “We always had strangers in our house,” Will said.

Room rates average from $145 to $175 a night, which reflect the couple’s desire to appeal to families and a range of travelers. “What a B&B is to me is not this boutique destination, but a place where you have a nice comfy room and you can spend time visiting the area,” Will said. “We want people to feel like they’re walking into a friend’s home.”

The Cunninghams like to tell guests about Antietam’s effects on the local community. “The battle was one day, but the aftereffects went on for months,” Miriam said. “Sharpsburg was a market town and a C&O Canal town. After the battle, folks spent months trying to find their farm animals and reclaim their land.”

The inn also draws visitors in the area to attend author Nora Roberts’ book signings in nearby Boonsboro, cyclists who are traveling on the C&O Canal, and hikers trekking the Appalachian Trail. Not all the battlefield visitors are there specifically to learn about the battle. Some are tracing family genealogies, and want to see where their ancestors fought, and in some cases, died. The inn also hosts families who are using local wineries or other venues for weddings.

Many guests stay in touch with the Cunninghams. One, a cookbook author, sent a copy of her latest cookbook. Another made the couple a corn broom. Still others send Miriam recipes for her to try. After the couple’s beloved dog Stirling, an English shepherd, passed away this summer at the age of 14, guests wrote many remembrances of Stirling on the inn’s Facebook page.

Guests often gather in the comfortable parlor to play games, read magazines, and talk about the day’s adventures. Some will take card or board games out to the veranda and sit on the plush cushions adorning the wicker furniture. Or they may grab a book from the inn’s bookshelves and read on the patio, under the shade of the maples.

The four guest rooms have different themes. Three are equipped with king-size beds, one has two queen beds. All have private bathrooms. The Antietam Suite, located behind the main kitchen in the old summer kitchen, has a brand-new walk-in shower. It’s the pet-friendly room. The Sarah Emma Edmonds Suite has access to the side porch from the room.

Like the Cunninghams, Chris and Amy Vincent have owned the inn just a few years. In 2015, they bought the inn from Paul and Joanne Breitenbach, who decided to retire. Chris is one of Antietam’s licensed battlefield guides, so inn guests are treated to Chris’ expertise about the battle’s history.

The couple were living in Odenton before coming to Sharpsburg. Chris, a 24-year Army veteran, was contracting for the military while Amy worked as a critical care nurse. Their two boys had graduated from high school, and they decided to look for an inn. Their search took them from Virginia to Gettysburg, Pa., before they discovered the Jacob Rohrbach Inn.

“This checked most of the boxes,” Amy said. “We wanted a historic building.” The couple also wanted the inn to be manageable for them to care for, so the five guest rooms and suites fit the bill. Similar to the Inn at Antietam, the 1830s-era summer kitchen has been converted into a first-floor guest room, complete with its own entrance and patio. It’s also a pet-friendly room. Chris and Amy are pet people. Their two Shih Tzus, Zoey and Maya, are allowed to meet willing guests.

The house was built before the Civil War.  The first part of the house, on the east side, was built of brick sometime after 1804. It was three stories tall with a cooking fireplace. Around 1835, the new owner, John Grove, added a western addition. It was made of high brick parapet walls that gave the building a distinctive look.

Samuel and Elizabeth Showe bought the house in 1862, a few weeks before the legendary battle. During the battle, the summer kitchen was hit with a 3-inch solid shot. Afterward, the house, like many in Sharpsburg, was used as a hospital for the wounded. Henry and Martha Rohrbach, who suffered their own Antietam tragedy, bought the house in 1864.

During the battle, the Rohrbachs lived on a farm along Antietam Creek, and troops surrounded the farm in the skirmish for Burnside’s Bridge. As a result of the battle, their daughter and granddaughter died. Two years later, they decided to give up farming and retire to a house in town. They didn’t escape the war, however. Early in the morning of July 4, 1864, Confederate scouts came into Sharpsburg. The scouts wanted the keys to the Rohrbach stable, where Henry’s twin brother, Jacob, kept his horse. Jacob was staying with Henry and Martha at the time. The scouts climbed the staircase to Jacob’s room, where he was asleep. Jacob awoke suddenly, and one of the scouts shot and killed him.

“These homes have a lot of history,” Amy said. “There have been a lot of lives in these houses. They each leave a mark and tell a story. The homes were built to last, but not so much for modern plumbing.”

The inn’s owners have had to wrestle with keeping the historic quality of the house, while modernizing it for guests. Restoring an old house is nothing new to the Vincents. Both grew up in old houses in Pennyslvania. As the inn’s third owners since it opened in 1991, they have repainted and upgraded most of the beds from queen to king-sized. They added crown molding to several rooms. They also converted a deck into a guest room.

The front parlor is a large, bright, comfortable room with thickly-padded period furniture where guests can relax after a day of sightseeing. The parlor connects seamlessly with the dining room, where guests sit at small tables to enjoy breakfast, surrounded by mahogany-stained wainscoting.

Most of the guest rooms offer private porches. The house sits on two acres, which offer lots of secluded green space and gardens. Rooms offer private televisions and mini-refrigerators. Rates range from $165 to $225.

For those who want to learn Civil War history and stay at the inn on a Wednesday, Chris does a series of weekly lectures each summer. Past lecture topics are detailed in Chris’ blog, which can be found on the inn’s website. Chris is an expert on the local farms, all of which were affected by the battle for weeks, months, and years afterward.

The owners of the two B&B inns in Sharpsburg have become a part of the quiet, tight-knit community adjacent to the battlefield.