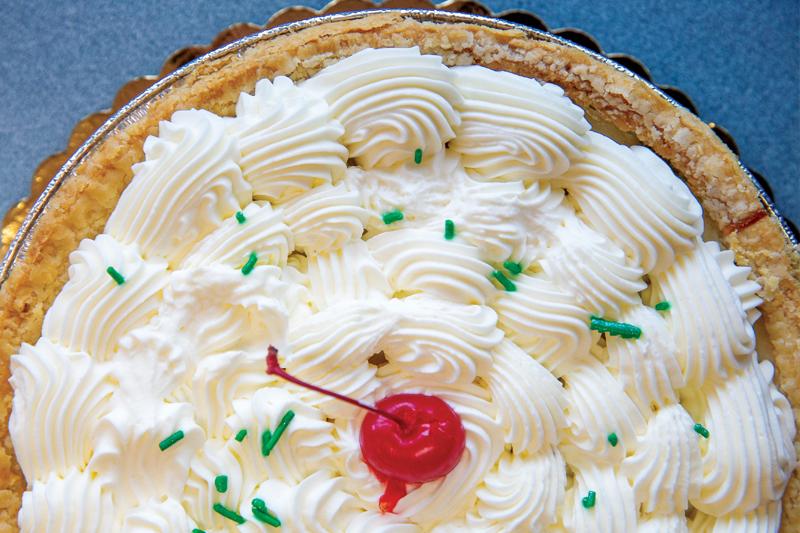 From the bustling, ancient city of Marrakesh, Morocco, to the sun-seared streets of Houston, Texas, and bohemian Carmel, Calif., Albert “Al” Elmerraji took the long way to Hagerstown. Now firmly entrenched in his new hometown (he’s been here 20 years), Al is celebrating a different milestone, the 10-year anniversary of his family business, Safron Bakery & Café.

The café is a bright corner nook in the Rosewood Commons plaza off Robinwood Drive, not far from the college and the medical center. It’s swathed in sunny yellow and orangey-earth tones, reminiscent of saffron pollen. The smell of early morning baking wafts through the parking lot, like a siren’s call to hungry fellows. “We used to have a gym next door,” says Al with a sheepish giggle, acknowledging the temptation of fresh baked Danishes and cookies for those intent on a healthy workout. The Hagerstown Sports Club and Fitness Center moved farther back down JFK Drive, but Safron is still churning out tasty treats.

Al discovered his passion for baking in a roundabout way, too. He came to America from Marrakesh at age 21 to study biology and found work at La Madeleine Bakery’s second location in Houston. That company now has more than 70 stores, eight of which dot the greater Washington, DC, area. The simple job was a surprisingly life-altering experience, prompting Al to shift his career focus to business, reinforcing a love of French-style baking and, sweetest of all, introducing him to his future wife, Hilary.

He smiles wistfully recalling the serendipity of their meeting, “We were both hired because we spoke French.” Neither had previous baking experience, so they worked on the accounting and management side of the business. Hilary grew up in Europe, spending time in France, Belgium, and England. French is also the language of government, diplomacy, and business in Morocco, owing to its history as a colony of France and Spain in the early 1900s. Morocco gained independence in 1956, but French remains widely spoken.

As newlyweds, the pair relocated to California’s Monterey Peninsula to be near relatives. They opened a small leather goods boutique in artsy Carmel, before Clint Eastwood was mayor, but it wasn’t enough to support a growing family. So, Al created a new niche for himself. He partnered with friends who were bakers and pastry makers to distribute their artisan goods across the countryside, garnering some of the area’s poshest resorts as clients. Here, buoyed by a culture of ardent creativity, Al rolled up his sleeves and dove into dough. His baking partners were his teachers as he explored different traditional styles.

“When I was learning in Monterey, bread was really my passion,” says Al. “I did it all, including local sourdough.”

The regional ecology that feeds San Francisco’s distinctive sourdough bread culture includes Monterey and is a source of great pride to resident bakers who capture natural yeast from the air. The resulting “mother” starter is zealously guarded and maintained, sometimes through decades, to ensure consistent quality bread with a toothsome chew and tangy flavor. The budding baker was still honing his craft when the family landed in western Maryland, but the entrepreneurial bug eventually bit again, inspiring Al to launch Safron in November 2008.

Today he bakes the café’s French white bread for sandwiches. In a motion toward the compact kitchen where an adult-height oven spins a carousel of 20 gleaming sheet pans at once, he notes that it takes six to eight hours to make a loaf of bread. He used to offer whole loaves for sale. “We’ve cut back,” he shrugs, explaining, “you need to sell it in volume.” A suspiciously slim man for a baker, he grins again, “If not, you eat them!” He also sends leftovers to the local cold-weather shelter. The café participates in REACH’s (Religious Efforts to Assist and Care for the Homeless) annual Taste of the Town benefit, too.

The small staff of 3-6 people bakes a variety of goodies every day, rotating through customer favorites, ready to grab and go. It could be cakes, pies, Danishes, croissants, or cookies. On the day we visited, a hill of vanilla-laced baklava stood alongside pumpkin muffins, sugar-crusted blueberry scones, and chocolate drizzled croissants. A cream-laden Black Forest cake, jeweled with maraschino cherries, and a meticulously arranged fruit tart with glistening glaze greeted customers from the front display case. Seasonal specialties, like challah and panettone, may make an appearance, too. The latter is a Sicilian-style Christmas tradition, a deep-bronze sweet bread with raisins, almond slices and candied lemon, available in eight-ounce or one-pound loaves. The counter showcases a few whimsical examples of bread crafted into animal shapes.

Safron is noted for their wedding cakes, including gluten-free options, and other special event orders. La Galette des Rois, the French-style “King” cake with almond, is a must-have for Orthodox Christmas on Jan. 7, while a stunning bûche de noel (yule log cake) accents any holiday table. It’s a light-as-air Genoise cake filled with cream and rolled into a cylinder, decorated to mimic this wintry forest icon. The recipe was created in the late 1800s by a French pastry chef.

“We do pies for Thanksgiving and tons of cookie trays for Christmas.” Pumpkin pie rules November, with apple a close second. “We use local apples from right here in Smithsburg,” says Al. “Some people order a hundred pies to give as business gifts to customers.” Shoppers can stop by to see what’s in stock, but it’s safer to order must-haves at least a week in advance.

Seasonal cookie trays fly off the shelf. Each is loaded with a jumble of four to five dozen. The classic, yet time-consuming, sugar cutout cookies appear in bell, tree or star shapes; petite Russian tea cookies, golden pignoli cookies, lemon drops, and gingersnaps all make an appearance. Cookies run about $8 a pound. “No matter how many we make, we sell out,” beams Al, noting that their popular almond horns are considered gluten-free because they are made with 100 percent almond flour. Al’s favorite? “All of them!”

Al is especially proud of the bakery’s clean label commitment. “We have been ‘clean label’ since before people knew what that was.” Clean label, or clean eating, is a popular consumer-driven movement that eschews synthetic chemicals and complicated ingredient lists. Across the board, consumers are demanding transparency of information about how their food is made. “That means products made with no more than three or four ingredients, all fresh, no preservatives.” He expounds, “When we say ‘chicken sandwich’ it is real chicken, not pressed and formed. When we do roast beef, it’s real meat without fillers or composites. You know what’s in it.” The same goes for their daily soup options.

“The portobello mushroom soup has actual mushrooms that we clean and chop…It has a touch of cream and not a lot of salt.” Those same mushrooms find their way into Safron’s veggie delight sandwich where they are layered into a grilled stack of roasted red peppers, provolone or mozzarella, avocado, and organic mixed greens. The café menu includes chicken or beef with pesto, a turkey BLT, a melty ham and cheese, and salads, with all day breakfast options coming soon. Al was setting up Safron’s new crêpe iron as we spoke.

The melding of North African, Mediterranean and European influence is clearly stamped on Safron’s menu. One frequent lunch special, a savory Greek classic, the lamb and beef gyro sandwich, is Al’s preferred meal. “I could eat that every day.” For Safron’s anniversary, he’d like to bring back their popular theme dinners, such as a Moroccan night featuring couscous with lamb shanks.

With a ready smile and an eagerness to please, Al is a gracious host who appreciates the many return customers who make Safron a part of their daily routine and their holiday celebrations.

As he shapes his plans for the decade ahead, it’s clear that he is open to a world of possibilities.