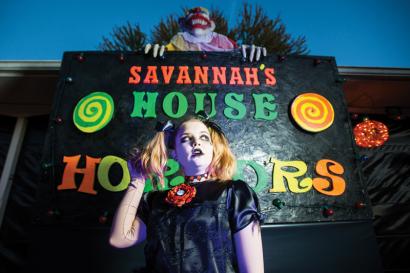 This Halloween will be the eighth year that James Gelwicks and his daughter, Savannah, 13, of Hagerstown, have turned their backyard into a multi-room, themed haunted house.

The theme of “Savannah’s House of Horrors,” as it has become known, is a secret until the big night, Oct. 31, when about 500 people traditionally show up at the Gelwicks’ house. But she did give Hagerstown Magazine a sneak peek, saying she is adding new rooms this year devoted to “Savannah’s Christmas Nightmare.”

There will be at least 14 rooms that visitors pass through. The haunted house takes about 15 minutes to complete, and takes up about half of the backyard of the family’s home, which sits on one acre in a North End neighborhood.

Count on surprises in every room, including “actors” — mostly Savannah and her friends — dressed in costumes and ready to jump out and scare people passing through.

She’ll turn a large trampoline into a wrecked UFO with aliens and an Area 51 room with fluorescent Styrofoam heads hanging from the ceiling. The backyard also will feature a large cemetery.

There will be at least six additional rooms that will be a different version of rooms Savannah has imagined in previous years.

Savannah attended Northern Middle School through eighth grade, and next year will enroll at the Barbara Ingram School for the Arts in Hagerstown.

When Savannah applied to the school, she submitted a portfolio of props and costumes she created for her haunted house in previous years.

After seeing how much James and Savannah enjoyed decorating the house for Halloween, Savannah’s mother, Jennifer, suggested they take it a step further and build a haunted house.

The family’s first haunted house in 2011 was smaller, and Savannah didn’t do much of the planning. Just a few dozen neighbors showed up for a scare.

That year there were just three rooms: one with vampires, one with a mad scientist, and another with spiders.

“It wasn’t even really scary for several years,” James says. “We always made it appropriate to Savannah’s age. Now, it’s just as scary as we can possibly make it.”

Savannah took over the majority of planning for the haunted house about two years ago.

“About 90 percent of what you see is her ideas,” James says.

In 2017, the haunted house included 15 rooms, and the theme was centered on missing posters with Savannah’s face. Rooms had spiders, mirrors, clowns, zombies and dolls.

“It’s whatever scares her the most,” James says. “It seems to change every year. It used to be ghosts, but now it’s dolls.”

Two years ago, the haunted house had a movie theme — a nod to some of Savannah’s favorite scary movies — including “Saw.”

“It just gets bigger every year,” James says.

He says people find out about the haunted house primarily through word of mouth. Savannah passes out flyers at her school, and they put up a few signs in town.

Two of her friends, Claire and Megan Seibert, first attended the haunted house and later became two of her actors.

Claire, 15, who attends Smithsburg High School, has portrayed Jason Voorhees, the main character from “Friday the 13th,” a clown, and a scarecrow with a pumpkin for a head in past years.

“Before I started acting in it, I would go through and would see it. It was fun. I liked how scaring people gets different reactions. It was funny,” Claire says.

Megan, 13, who attends Smithsburg Middle School, says she has been participating for about two years. Last year, she wore a black and white checkered costume in Savannah’s black and white room so she blended into the background.

She says it worked, and she was able to jump out and scare people who walked through.

Their father, Ian Seibert, says the family has been attending the haunted house since it began.

“It grows a little every year,” he says. “They started adding actors in the past three years.”

Ian says he helps James and Savannah assemble the walls each year when it is still in the beginning stages.

“It’s different each year,” Ian says. “You don’t want to see the same thing each year. It’s definitely an event.”

“It’s a lot of hours, just the planning,” James says.

They get ideas for the rooms by watching YouTube videos and going to about three other haunted houses each year.

Planning for the next year’s haunted house begins almost immediately after Halloween. On Nov. 1, James and Savannah hit the sales at party stores, and during the year they’ll pick up a lot of their props at area yard sales.

They start building the haunted house in mid-summer. By August, James says, walls on the rooms start going up.

Savannah does a lot of the building, her father says. She also took weekly sewing lessons from a neighbor to learn how to sew the costumes used in the haunted house.

“I like building,” she says. “I like making memories with my father. We plan it out and build it together.” James says he takes the week of Halloween off from his job as a postal worker to put the finishing touches on the haunted house.

“I’m so proud of her,” James says of his daughter. “Her work ethic and her creativity to get all of this done. That’s the thing I think is the coolest. She builds and enjoys building and sewing the costumes.”

“While she could be playing on her phone, which she still does a lot, don’t get me wrong, she goes outside to cut some wood and put some walls up,” he says.

James describes the annual event as a family effort that includes his wife, Jennifer.

“She gives us good ideas every year, and she gave us the initial idea [to start the haunted house] which was the most important,” he says.