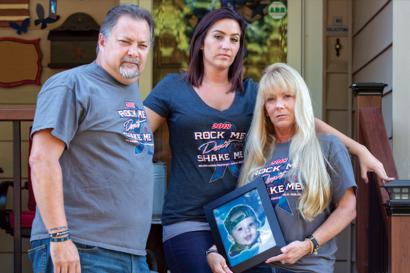 The tragic loss of four-month-old baby Justice propels his family to take action aimed at preventing others from having to experience the same thing.

by Lisa Gregory and by Turner Photography Studio

With the birth of her second child, Ashley Rutherford was constantly reminded of the missed milestones of her first. “That was hard,” she says. “The crawling, walking, talking. All of it.” Justice Myers-Cannon, Rutherford’s first child, was only four months old when he died in January of 2007. Rutherford’s boyfriend at the time, Floyd Edward Bingaman III, was later convicted and sentenced to 30 years in prison for Justice’s death.  “We were robbed of so much,” says Richard “Nink” Myers Jr., Justice’s grandfather.

Justice’s birth had been a moment of great celebration for the Myers family. He was the family’s first grandchild. And with two daughters, Ashley and her half-sister Vicki, in the family, Nink and Dee Myers, Ashley’s mother, were delighted to have a grandson to dote on. “Finally, a boy,” says Nink with a wide grin.

Mere months later, however, he would be gone, and the family would never be the same.  Since his death Rutherford has gone on to get married and have two other sons, but still struggles with his loss. “The pain never goes away,” she says.

But the family has been determined to do much good in Justice’s name, from changing laws to raising money and making donations to change lives. They worked for years to pass Justice’s Law, which increased incarceration for fatal child abuse in Maryland from 30 years to 40 and finally up to life. And they have also raised thousands and thousands of dollars to support programs that address the issue of abuse and offer support to those in need.

“By doing these things,” says Vicki, “you are helping ease the pain.”

Justice was a happy baby, his family recalls. Always smiling.  “He loved to play peekaboo,” says Dee. “He had this laugh. This hearty laugh.”

And beautiful blue eyes. “Blue like the ocean,” says Dee. In fact, once Justice had been taken off life-support and the decision was made to donate his organs, Nink says he was agreeable to the kidneys, liver and heart. But, “Not his eyes,” he says. “Not those beautiful blue eyes. I couldn’t imagine seeing those eyes in another child’s face.”

The day he died there was no inkling of what was to come. Justice’s great-grandmother was watching him as she often did while Rutherford was at work.  Rutherford picked him up there on her way home. “My mom had him fed, changed him into a dry diaper and into his pajamas,” says Dee. “He was ready for bed.”

Rutherford, who was staying with Dee and her stepfather at the time, returned home. Bingaman, who was not Justice’s father, was with them as well. Rutherford put Justice to bed and went to take a shower.

According to Dee, Rutherford had discovered Justice “with a lump on the back of his head, and he was wheezing,” say Dee. Dee has been designated as the family spokesperson. Rutherford still finds it too difficult to discuss the details of Justice’s death. “She’s a different person now,” says Dee. Rutherford, according to Dee, would later say that Bingaman had told her that while she was in the shower Justice had woken up and had gotten sick and vomited. “But that he had no problem putting him back to bed,” says Dee.  “She never doubted him.”

According to Dee, prior to the incident there had been no hint of aggressive behavior by Bingaman. “He would feed Justice and walk around with him and pat him and put him to bed,” she says.  Adding, “Being older and more experienced, I blamed myself for a long time. Why didn’t I see something?”

Dr. Allen Walker, a physician at Johns Hopkins Hospital, where Justice was medevaced, would later tell police Justice’s injuries were some of the worst he had seen in his 30 years, according to court records.  Walker said Justice had been shaken so severely that the retina of one eye had become detached, and he suffered multiple skull fractures as well, according to charging documents.

“He was unrecognizable,” says Nink. “The swelling was so bad.”

Shortly following Justice’s death, a benefit for the Myers family was quickly arranged by the local music community to assist with medical and funeral expenses. Nink had long been a member of the local rock music scene, described by those in it as “a close family.” Although not in a band himself, Nink would often assist in helping local bands “set up the stage, lights, and sound,” he says.

And despite a heavy snowfall that February weekend, “People came out. They made donations. They supported us,” says Nink.

Nink would take that first act of kindness and create a decade-long running benefit, Rock Me Don’t Shake Me – Musicians Against Child Abuse, raising money and awareness.  The latest benefit, held in April, which is Child Abuse Awareness Month, saw nearly 1,000 people attend and just under $20,000 raised. With each passing year the event has grown, having to move to three different venues since it began due to the increasing turnout.

The Rock Me Don’t Shake Me event has donated money and items to such local organizations as Washington County Child Advocacy Center’s Safe Place, Citizens Assisting and Sheltering the Abused or CASA, Inc., nearby chapters of Bikers Against Child Abuse, and women’s and children’s services at Meritus Medical Center.

But the family’s efforts did not stop there. Seeing how distraught the family was, Greg Alton of the Washington County Sheriff’s Office and the lead investigator in the case, made a suggestion.  “I told them to take their grief and anger and try to do something productive with it,” he says. More specifically, he suggested that they try to change Maryland’s law to increase the maximum sentence for the conviction of child abuse leading to death.

The family attended a county delegation public meeting where they shared their concerns about the current law with Christopher B.  Shank, a member of the House of Delegates at the time.  That meeting would result in the drafting of Justice’s Law, which called for the the maximum sentence to be increased from 30 years to up to life imprisonment.

The family agreed. The bill passed, and the law was finally changed in 2012.  But even though they agreed to 40 years, the family, says Dee, never strayed from their original goal of up to life. “Because there is never enough time for the life of a child,” she says.

Then in 2016 on the heels of several high-profile abuse cases in Washington County, including the  beating death of a nine-year-old boy over a missing piece of birthday cake, “We went down to Annapolis again, and I begged and pleaded,” says Dee.

This time, the expansion to Justice’s Law, which was part of a criminal justice reform bill, was passed, increasing the law from 40 years to up to life.

“I am so proud of this family and the tenacity they have shown,” says Alton.

And it is a family that continues to hold tight to the little boy with the bright blue eyes and hearty laugh.

Justice’s grave is always decorated. His birthday and angelversary are always celebrated and acknowledged, usually with the release of balloons or butterflies. The family has had age progression photos done to show what he would have looked like at five, 10 and another one will be done at 16. And Ashley, Dee, and Nink, as well as other family members, have tattoos that honor Justice’s short but impactful life.

“He is always with us,” says Nink.