When A Little Kindness Goes A Long Way 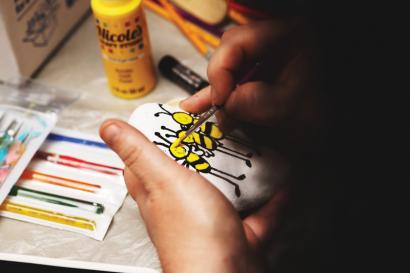 Hager Rocks connects the community, encourages artistic expression, and random acts of kindness in Washington County and beyond.

by Lisa Gregory and photos by Turner Photography Studio

Cindy Dwyer decided to create the Hager Rocks Facebook group because she just loved the concept of spreading kindness, she says. And she was not alone. While Cindy thought “maybe we would get 500 members,” today the group, which began in 2017, has some 5,000 members and counting.

“It really took off,” she says.

The kindness rocks movement is based on the idea of taking rocks and decorating them with inspiring messages or artwork and then hiding them for others to find. And those created by Hager Rocks have been found in a variety  of places, including the window ledge of a drive-thru window at McDonald’s, under a light pole in the parking lot of an Ollie’s store, frequently in local parks, and as far away as the Caribbean, among many other places.

According to Cindy, those who find the rocks are encouraged to join the Hager Rocks group and post their finds. The rocks say Hager Rocks and have the Facebook symbol on them. The group, says Cindy, has fostered a real sense of community, with members often getting together for rock- painting parties.

A woman who randomly began placing rocks with inspirational quotes and sayings on the beaches of Cape Cod, Mass., started the kindness rocks movement a few years ago—and it rapidly caught on, spreading across the nation and beyond, while seemingly touching on a collective nerve within today’s society. Brian Meier, a professor at Gettysburg College, thinks he may understand why. “We’re living in a pretty tough time right now,” says Brian, who has done research on pro-social behavior. “People aren’t always so nice to each other, especially on social media and in the news. These rocks remind us what it means to be human, and what it means to be kind to each other.” Cindy adds to that sentiment by sharing, “You’re letting people know that someone out there cares about them.”

And it can be quite addictive. Loretta Hardman, a Hager Rocks member, admits she is hooked on the process — especially when one of her rocks is found. “‘I think to myself, ‘I painted that rock and made someone happy,’” says Loretta, who adds that she has probably painted about 3,000 rocks in six months’ time.

Jim Jordan understands her passion. He became a member after he and his family discovered kindness rocks in a local park. Jim, who became disabled after a workplace accident, enjoys spending his time painting the rocks. “It gives me something to do and helps the community,” he says. “What is better than trying to spread kindness?”

The following stories attest to the impact that kindness rocks can have on those who find them. “It’s simple, but can mean so much,” says Cindy.

Angie Mason’s 80-year-old mother had taken a fall, and the once-independent woman was now facing a different kind of life. “She was going to have to go into assisted living,” says Angie. And it was this thought that was weighing heavily on Angie’s mind as she went through the drive-thru window at McDonald’s one morning. Then she saw it. Sitting on the ledge was a pink rock with black lettering and two simple words written on it: “Don’t Worry.” Angie took a picture of the rock and posted it on Hager Rocks. “I wrote, ‘Thank you for making my morning! You have no idea how very much I needed this beautiful, kind, gentle reminder,’” she says.

Ironically, she would later learn that the rock was initially found at an assisted living facility before being rehidden. “It was thought that one of the residents had made it,” says Angie. “That just blew me away because of what I was worrying about that day. It was the message that I needed.”

Since then, Angie’s mother’s transition into assisted living has gone well, she says. And Angie is now a member of Hager Rocks. “I decided that I was going to do kindness rocks and spread that kindness and keep it going,” she says. “It can be just a simple message, but it can really change people.”

The Future Is As Bright As Your Faith

Lindsay Jones had just said goodbye to her brother, Bobby Lee, who after years of struggling with addiction had died from an overdose. She had come to Hagerstown, where her brother lived, from West Virginia for the funeral. “I was feeling so lonely,” she recalls. “I was having a really hard time.”

Lindsay and her family had stayed at a hotel during the funeral, and as they were preparing to return home, getting into the car, she spied a rock in a grassy area next to the car. The rock was painted with a heart inside a light bulb and a message that said: “The Future Is as Bright as Your Faith.”

Furthermore, Lindsay says that her brother was very artistic and would have appreciated the kindness rock movement. “He loved stuff like this,” she says. Lindsay kept that rock. “I don’t have a lot of things that belonged to my brother,” she says. “Just a couple of his shirts. So, when I am having a bad day or really missing him a whole lot, I hold the rock and talk to it. I really feel that that rock was meant for me to find.”

A rock sits in a place of honor in Kaity Marks’ dorm room on a table where she can see it easily and often. It has one word written on it: “Inspire.” And according to Kaity, it certainly does. “It means so much to me,” she says. Kaity found the rock on a shopping trip in Hagerstown. She and her 4-year-old sister, Reagan, spotted the rock, which was beneath a light pole in the parking lot in front of Ollie’s Bargain Outlet. “We saw it at the same time,” she says. “It was the first one we had ever found. Reagan was so excited.”

Reagan wanted to take the rock into Ollie’s with her, but Kaity convinced her to leave it in the car. “I didn’t want her to lose it,” she says — and for good reason. Kaity, who is attending Alderson Broaddus University in West Virginia, says the rock had made an immediate impression on her. “I am an elementary education student,” she explains. “I went into this profession because I wanted to inspire young children. I want to inspire them to do good things in life.” And for her, the rock is a constant reminder of her commitment to just that. “It’s special,” she says.

Steve Goodman of Towson was in the midst of a 12-day cruise of the Caribbean and visited a cathedral in Antigua. As he was leaving the church and walking down the steps, he noticed a rock with a message. On one side, it read: “Terry and Bonnie 11-13-87,” and on the other: “Please Post and Help Me Travel.” The rock also had the Hager Rocks name and Facebook symbol.

Bonnie Gump, one of the early members of the Hager Rocks page, had hoped to go to the Caribbean to celebrate her 30th wedding anniversary, but it was not to be. “So I decided if I couldn’t travel, maybe the rock could,” she says. A friend who was planning a trip to the Caribbean offered to take the “anniversary rock” along with her.

“I had read stories about people leaving notes on rocks,” says Steve. “But this is the first time I had seen one.” And the fact that it had originated from his home state of Maryland and was in Antigua made it “a lot more interesting,” he says.

Steve found the Hager Rocks group and posted his find before proceeding to Saint Maarten and leaving it there. Bonnie was delighted with his post. “I was so excited,” she says. And she hopes the rock continues to travel to even more faraway places. “Maybe Germany or Australia,” says Bonnie. “Anywhere it can go to.”