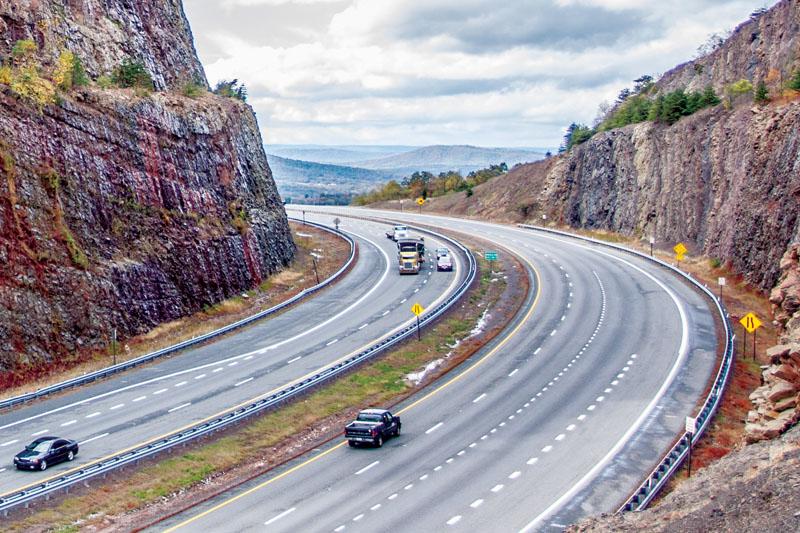 Originally opened in 1991, carving up of Sideling Hill required the removal of 3.5 million cubic yards of soil and rock. This soil and rock has been temporarily stored at a State Highway Administration (SHA) storage site, until the project can be completed. This past month, the state of Maryland finally started work on completing the project by converting the mountain cut into a tunnel.

At an estimated cost of $134.5 million, the State Highway Administration has begun the unique process of “building a tunnel in reverse.” Traditional tunnel building requires specialized tunnel digging machines designed to traverse sections of rock underground. However, in this case, Maryland will construct the I-68 tunnel in the existing empty space created by the mountain cut, then backfill the mountain with the soil and rock originally removed during excavation.

Once support beams have been added, ventilation systems installed, and the concrete and steel tunnel casing is put in place, back-filling of the mountain will begin. A special crane, similar to an arcade claw machine, will “be built on top of the mountain, allowing easier movement of rock and soil to the proper location in the mountain.

One of the most challenging aspects of this process will be returning the same type of rocks to their original locations. As many are aware, the rock exposed in the current cut has multiple color bands. Each of these color bands is a different type of rock, which has been carefully sorted during its temporary storage. Environmental Protection Agency regulations require that when reassembling a mountain, those rocks be returned to the part of the mountain where they came from. An SHA representative stated, “It’s like putting back together a jigsaw puzzle while playing Tetris, with about 3.5 million pieces.”

The State of Maryland will be hosting a contest to determine the name of the tunnel once it is completed. The winner will receive a $15 gift card which may be used for a trip in the tunnel’s premium VIP lane.

Did you know that it would have cost 83 percent more to build a tunnel through Sideling Hill than it cost to make a cut through the entire mountain? This is a satire article by Ken Buckler.