Hawking Their Yesterdays For Tomorrow’s Next Sound 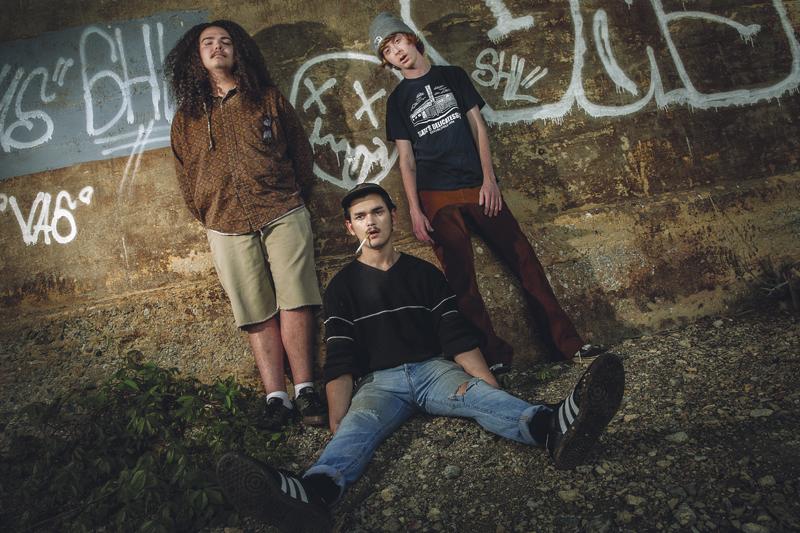 The Slim Jimmies are quickly breaking out of the margins between who they are, and becoming who they want to be.

by Matt Makowski and Photos by Turner Photography Studio

Local power trio The Slim Jimmies refer to themselves as “death pop,” and to the naked eye, this noise-driven indie rock outfit could be written off as a re-creation of a handful of ’90s bands destined for heavy rotation on college radio stations. But throw a pair of worn-out jeans and a flannel shirt on that eye, and you see a much more genuine article. The stripped-down, yet fuzzed-out guitars and heavy reverb don’t come from too many stoned nights of listening to Sonic Youth, Polvo, and My Bloody Valentine, they’re the natural progression of a heavy dose of the classics.

“I listen to a lot of different stuff. Soul, funk; I listen to a lot of Herbie Hancock. I love jazz. Grateful Dead, Led Zeppelin…,” says drummer Alvino Sandoval. “Yea, Steely Dan, Neil Young, all those guys,” chimes in bass player Isaiah Rosser. That’s not to say you can necessarily hear all of their influences on the surface, but knowing this makes the music they’re creating all the more authen-tic. And the goals of this collective — all in their very early 20s — are simple: play music, have fun, and maybe make other people slightly depressed in the process. For a band barely two years into its existence, there’s already a lot of evidence of progression, and foreshadow-ing of a lot of experimentation to come.

Last September The Slim Jimmies embarked on their first tour — and in typical punk rock fashion, things didn’t go exactly as planned. “We were leaving in our buddy Tim’s van. He was driving. We were packed up, and were all set to go,” Isaiah says. On the night of Sept. 2, the band made it as far as Cumberland, but the van just couldn’t take them any farther, and they had to turn back around. “The next morning, we’re like, ‘What are we gonna do, man?’ It was like 10 a.m., and I asked Steve, who was going on tour with us, if he could get his grandmother to lend us her van,” Isaiah says. “When she let us use the van, I freaked out,” Isaiah says with a calm smile. Then Cumberland struck again.

There wasn’t a drop of coolant in the radiator, Isaiah says, and the van more or less blew up on the side of the highway after the Y pipe cracked. The engine was overheating, and fluids were spewing everywhere. The van full of gear and not-yet-stinky guys was towed all the way to Frostburg and what was the closest Auto Zone to try and get back on the road. The band insisted on putting in a plug for AAA here. “Get triple A! They really helped us out,” singer and guitarist Austin Peck chimes in. In the Auto Zone parking lot, Isaiah watched some YouTube videos on how to replace the Y pipe (he’s not a mechanic, mind you), and got the new part on. But when they tried to start it up, it wasn’t taking.

Luckily, the video Isaiah watched was pretty thorough — but maybe lacking a little in safety tips. They deduced that air pockets in the line kept stalling the engine, and needed to be flushed out, but weren’t quite sure how to go about it, and were all but ready to throw in the towel. “I went to undo the reservoir, and my hand got caught — and it fried my hand. There was a bubble sticking off it. It was huge and gross, real gross. I had to deal with that all tour. But in the end, your knight in shining armor came through,” says Isaiah with a look indecipherably stuck somewhere between proud and sarcastic.

Despite the jerry-rigged van, and a bass player with a warped hand, the crew had the enthusiasm of having embarked on a much more fortunate set of circumstances, and carried on. And for reasons that defy modern mechanics, things only went up from there. “We wound up missing dates in Louisville, Ky., and Cincinnati due to the van troubles, but after that, it was smooth sailing, BO, and gas station burritos,” laughs Austin.

A Punk Rock Collects No Moss

An aspect of the DIY punk scene that a lot of people don’t really understand is that you actually have to “do it” yourself. It’s work — and the pay ain’t all that great — so there has to be a lot of passion there to persevere. The band went through a couple of early lineup changes with Austin maintaining the helm throughout. Shortly after locking down the current roster in May 2017, The Slim Jimmies independently recorded their first demo over the course of six hot July days in a living room, and played any shows willing to put them on the bill — including a lot of house shows in Washington and Franklin counties. Proving ambition can be a helluva drug, the band wasted no time and released a follow-up LP, “Fever In Children” this past January, and plan to have LP II aka “cheap furniture” out Aug. 8.

“Right now, we’re working on new sounds that touch more on garage grooviness. It’s not rock, it’s still anti-rock, but we’re also incorporating jazz and blues in our rhythms a lot — and I want to make that shine more in these next songs,” says Austin. If the disparity between the band’s first and second recording is any indication of what’s in store, that’s nothing but good news. “The first album was rushed, honestly,” says Austin. “We have improved a lot since we put out our demo, and we have better chemistry and all that, but getting my buddy in Frederick to mix and master everything, that really helped the sound,” says Alvino.

In old school punk fashion, Isaiah and Austin are also working on a skate film, for which they will naturally use Slim Jimmies’ songs as a soundtrack. “We don’t want to have to deal with copyrights. We’ll just make the songs,” says Isaiah. “Yea, we’re gonna package ’em, put ’em on VHS tapes, and sell ’em out of the back of a Gran Torino,” Isaiah says —though he admits they may need to sell a VHS player with the tape.

The band’s most recent release, “Fever In Children,” has what appears to be a distinct throwback mentality to the days of vinyl in its tracking. The first half of the record has a defined sound best described as sleepily melancholy, but the second half changes a good bit with heavier chords, more distortion, and shuffling rhythms broken up by non-linear beats, breaks, and driving progressions — which is in line with the album’s narrative. “In the concept of the story, it gets heavier the more it goes on…the songs get a little dark, and have a more depressing mood,” says Austin. But in the first half vs. second half debate, some artistic acts take place by way of chance. “When we put it on a tape, I realized when you flip it over to the B-side, there’s this whole other sound, and just thought it was cool,” Austin explains.

Speaking of accidents, every band gets asked about the meaning behind its name, but for a band you’d think was either named after a meat snack or a tool used to break into cars, Austin would like to ensure you that you’re way off the mark. It was just an epiphany conjured by the band’s old drummer, Brady Hornbecker.  “We were driving around and he was just saying words. Then he said, ‘The Slim Jimmies’ and looked over at me. Then he just kept saying it over and over again. I was like, ‘I know where you’re going with this.’ So we just used it. When he left the band, we were gonna change it, but his dad was already trademarking it for us, so we’re stuck with it,” Austin chuckles with a shrug. “It’s just a name. That’s why we’ve gotta have really cool album covers.”