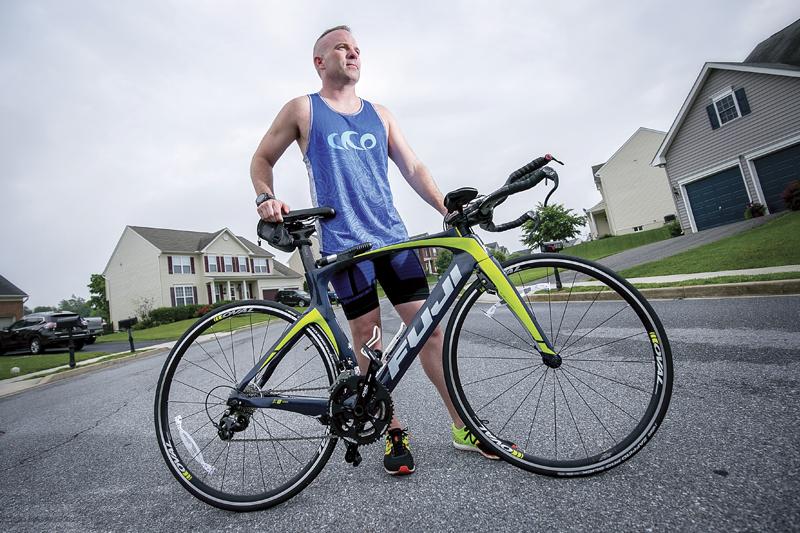 Chris Owens is comfortably uncomfortable about joining the ranks of IRONMAN with the hopes of raising money for Cystic Fibrosis research.

The mileage from Boonsboro to Cambridge is 141.7 one way — or roughly the equivalent of the 140-mile IRONMAN Maryland competition coming Sept. 29. Drive time is estimated at two hours, 27 minutes from western Maryland to the Eastern Shore, but Boonsboro resident Chris Owens will swim, cycle, and run between 12 and 13 hours from start to finish before the day is over.

The 34-year-old began training for this, his first IRONMAN competition, after completing the JFK 50-Mile Memorial Ultramarathon in November 2017, which begins in Boonsboro. “You take South Mountain along the Appalachian Trail for the first 15 miles. The terrain is rocky. It’s like you’re hiking,” Chris says. After a 1,000-foot drop along mountainous switchbacks, the next 27 miles following the C&O Canal trail is seemingly flat, but is instead its own steady incline. “Then you jump off near Dam 4 and run nine miles to Williamsport.”

When finished — cold, wet, and exhausted — he thought he wanted to die. Yet, all muscle from neck to ankles, Chris Owens is no lightweight, physically or mentally. “You learn through that experience you’re capable of doing more,” he says.

Driven by the pure physicality of the challenge, and the support of the running community he joined, Chris is also inspired to give back to a community he did not sign up for but was conscripted into nonetheless. At five months, when their son C.J. was still in the womb, Chris and Jennifer Owens learned he would be born with Cystic Fibrosis. Sweethearts since high school, the couple met with a genetic counselor and learned both parents are Cystic Fibrosis carriers and that there’s a 25 percent chance they will bear a child with CF, and a 50 percent chance they will bear a carrier child.

“You’re thrown into this Cystic Fibrosis community with other families,” Chris says. “Everyone is close-knit, does walks and fundraisers,” he says. “We did that when my son was first born. Then over time, we didn’t want CF to take over our lives,” he says, and adds, “This doesn’t define him, this is just something we have to deal with.”

So, Chris and Jennifer stopped participating in community events to focus on raising C.J., and later their daughter, Leona, also a CF carrier. “All the while, I started getting involved in triathlons to stay in shape,” Chris says. After running marathons that he considers smaller, shorter races, and raising a couple hundred dollars to support CF research, he upped his game in 2017.

Around the same time, a career move to a Rockville financial consulting firm, and the subsequent shift in healthcare plans, led to another realization: the rising cost of caring for a child with CF. With approximately 30,000 cases nationwide, the condition’s treatments are exorbitantly expensive. C.J.’s medication would cost roughly $900,000 annually if the Owens family had no private healthcare plan.

The combined momentum of finishing the 50-mile foot race with another opportunity to contribute to CF research propelled Chris to register for the IRONMAN, in spite of his inner reservations. “What if I can’t do it? What if I fail? What if I have to quit?” he wonders.

After the JFK, Chris took a couple of months to rest, then began anew — at square one.

Three days a week he alternates between swimming, biking, or running. Two days a week, he builds upon that foundation by bricking two disciplines back to back — a 20-mile bike ride with a six-mile run, for instance — for a complete five-day regimen. Gradually, he increases the distances. Some spring weekends he took part in other regional events, like Mount St. Mary’s triathlon in Emmitsburg in April, or the Great Strides Walk in Frederick in April.

Halfway into the process, Chris surpassed his fundraising goal of $5,000. That money is doled out directly to the area CF affiliate, while Chris’ own expenses continue to climb. Registration for an IRONMAN is $800 by itself — and the purchase of an ergonomic Fuji Norcom bicycle set him back four digits. The cost of swimming during his lunch break at the Rockville Swim Center is nominal, but weekends will find him in open water, maybe Greenbrier Lake, to prepare for the Choptank River where the IRONMAN Maryland course begins with a 2.4-mile swim. With water temperatures anticipated in the 70s, and at the height of jellyfish season, Chris will don a wetsuit as long as the water temperature is 72 degrees or lower so he doesn’t overheat while enduring an hour-and-thirty-minute, or longer, crawl.

The IRONMAN’s second 112-mile bicycle leg loops twice around a 50-mile course set on Blackwater National Wildlife Refuge Forest. It’s expected to be windy and Chris estimates he’ll be spinning for six to seven hours. The last 12 miles will bring him into downtown Cambridge, where he will run the marathon part, 26.2 miles, on foot.

By the time race day rolls around, Chris Owens will turn 35 years old. He’s already thinking about the next chapter in his amateur athletic career. “I saw a story online about a guy who was tethered to a blind IRONMAN contestant,” Chris says. “I want to volunteer for the race community — instead of me, me, me…as selfish as it is to do an IRONMAN — I’d like to give back. Maybe volunteer to be a pacer. I’ve seen people with one leg do JFK, people really young, people really old. I’d like to find a way to help encourage people who think they have a limitation, inspire people who have a disadvantage, and help them achieve their goals,” Chris concludes.

The Owens family will follow Chris the 141.7 miles from Boonsboro to Cambridge in September to see him dash across the finish line. Can’t make it but want to experience the journey, too? You can keep up with Chris by logging on to his blog, www.fightingcfwithiron.com.