It Is A Pretty Big Dill 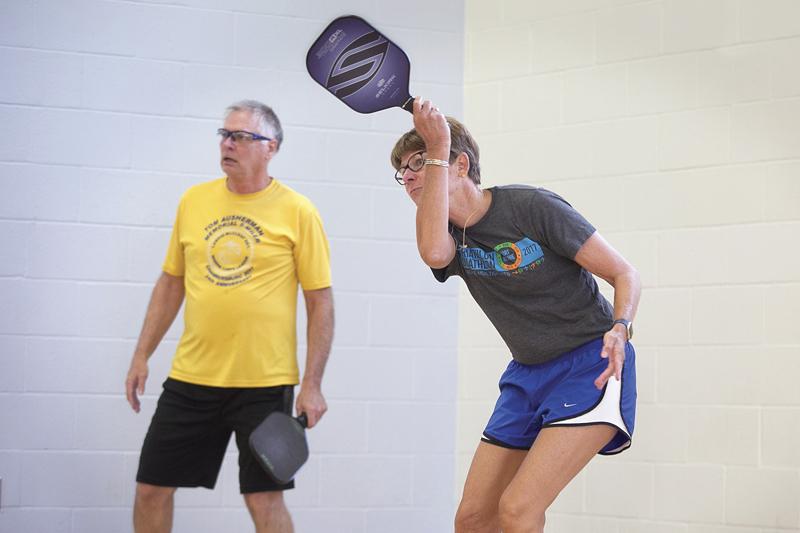 Pickleball is one of the fastest growing sports in the U.S., and is probably already on a court near you.

The sharp incline of players of this game with a sour name — known as “picklers” — now with some 100,000-plus active players registered with the U.S.A. Pickleball Association, can be chalked up to myriad reasons, not the least of which is its addictive and simple premise.

Pickleball has taken off within U.S. senior communities, including those in Utah, Myrtle Beach, Arizona, and Florida’s The Villages — the largest U.S. active adult community — where there are almost 200 pickleball courts. Dave Nycum of Hagerstown, a two-and-a-half year pickleball veteran, has organized local games and plays pickup games several times a week throughout the area. He also plays singles on Sundays with his wife, Debbie. “It’s fun and provides a great workout,” shares Dave, who will compete in his first tournament this summer.

The sport has also become popular in U.S. secondary schools for physical education curriculum, including both North Hagerstown and South Hagerstown high schools in recent years.

So What Exactly Is It?

Pickleball is a hybrid sport that combines elements of tennis, badminton, and pingpong. It’s played indoors or outdoors on a badminton-sized court with a minimally-modified, slightly lower tennis net, and equipment includes solid composite paddles and plastic balls similar to Wiffle balls.

The game can be played with two single players or more commonly with doubles teams, with tournaments in men’s and women’s singles and doubles as well as mixed doubles games for many ages ranked within nine Pickleball Community Volunteer Group skill brackets.

Although a number of origin theories for the sport exist, the official pickleball website says it was born in 1965 on Bainbridge Island in Washington state and conjured up by future Congressman Joel Pritchard and his friend Bill Bell as a way to occupy the families’ kids who were bored one summer Saturday afternoon. The Pritchard property had an old badminton court and the friends tried unsuccessfully to locate badminton racquets. Instead, they found pingpong paddles and a Wiffle ball and set up the net. After experimental play, they lowered the net’s height from 60 inches to 36 inches, and devised rules relying on those used for badminton as a basis, creating a game the whole family could enjoy and play together.

As for its memorable name, there are two possible sources: Joel’s wife Joan felt its combination of different sports reminded her of a crew’s pickle boat where oarsmen are selected from other boats’ remaining crews. Joel’s friend Barney McCallum — who was in attendance for the conception — thinks it derived from the name of the Pritchards’ cocker spaniel, Pickles, who participated in games by chasing the ball and running off with it.

Both singles and doubles use the same sized playing area and rules, and games are played to 11, with the winning team having to win by two points. Tourna-ments can go to 15 or 21 points with two-point win margins. In pickup doubles games, wins are accomplished after nine or 11 points to allow more players to rotate into play.

Underhand serves are made below the server’s waist while standing behind the baseline. Serves must land within diagonal opposite court lines (like tennis). Only one serve attempt is allowed, with the exception of a let serve when the ball touches the net and lands properly (let serves are replayed). First serves are made from the right/even court, and only the serving team scores points. The serving team must let the returned ball bounce on their side before hitting it back. After that, both teams may volley or play off a bounce. The bounce rule for the serving team eliminates their initial serve and volley advantage, and extends game rallies.

In doubles play, both players have the opportunity to serve, and two faults are allowed per team before the opposing team gets serve rights. Once there’s a score, the server switches court sides until they commit first fault. The partner then serves from their correct courtside, except if it’s first serve sequence of a new game. When the serving team commits two faults, the opposition gets the ball and serves from the right court until they commit two faults. Faults by the receiving team result in points to the serving team.

Like the rest of the country, interest in pickleball is growing in the Tri-State area, with players of all skill levels meeting for pickup games at community recreation centers, churches, country clubs, parks, and YMCA sites in Waynesboro, Chambersburg, and Hagerstown.

Metro Tennis owner and enthusiastic player Skip Fielden has many businesses and homeowners with existing tennis courts under contract to convert them to pickleball, plus contracts building new courts for several growing local active adult communities and businesses like the Hagerstown YMCA. “Pickleball is an easy game to pick up and it’s a great way to get exercise.”

Bill Hunsberger discovered pickleball four years ago. He has been an enthusiastic participant in round robins at the Hagerstown YMCA and throughout the area since. A lifelong athlete, Bill won the gold medal in both the Super Senior International Pickleball Association Tournament in men’s doubles 75-plus age bracket in May 2017, and the National Senior Games mixed doubles 80–84 age bracket in June 2017. He enjoys playing doubles games and says his tennis experience made playing pickleball an easy transition.

Tom Brown, a three-year pickleball player who organizes local pickup games, loves the game he describes as “ping pong on steroids.” “You have more reaction time to plan shots and longer volleys because the ball travels one-third the speed of a tennis ball,” he explains. “It provides great competition, camaraderie, and fun for all ages and all abilities.”

Tom and Connie Kline of Shippensburg are 20-year veterans of the sport. “We both played tennis and while visiting Florida saw pickleball games. We began playing and it pulled us in to better our skills. It’s really fun,” shares Connie, who plays twice weekly with Tom at Hagerstown and Chambersburg YMCAs.

Pickleball offers great low-impact exercise that is easy on the joints, plus it maintains strong hand-eye coordination. It’s also a great social venue, and the equipment cost is inexpensive, with paddles costing around $60–100, and a can of balls is around $10.

Linda and Skip Elliott of Chambers-burg also enjoy pickleball, although Linda admits she didn’t think much of it until she herself played. “I can bring my tennis skills into the game for shot strategies. I sometimes play twice a day and play five or six times a week.” Linda highly recommends pickleball to those new to the sport. “Pickleball is loads of fun, a great way to get exercise and learn something new. It offers a way to be social, meet great people, and pass the time. I encourage anyone of any age to give it a try.”