Joy of the Ride 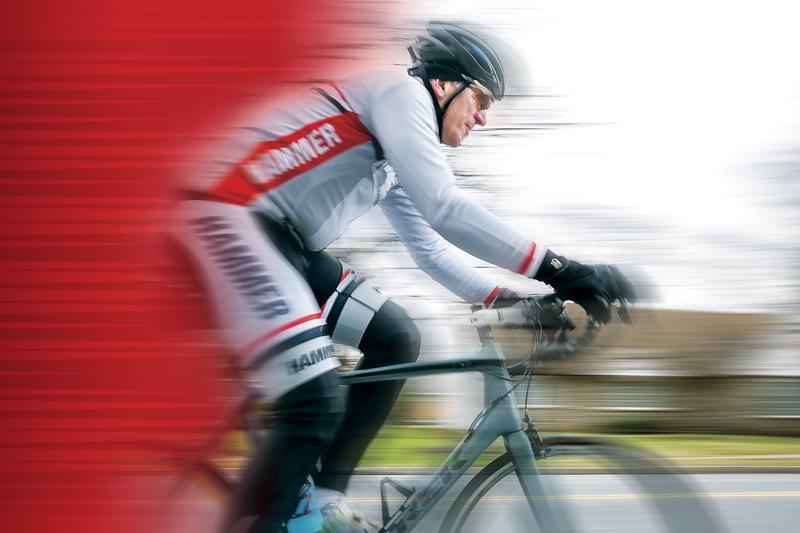 Hagerstown Gears Up Its Commitment as a Bicycle-Friendly Community

May brings warmer temperatures, longer days, and new gifts of springtime beauty, providing the perfect excuse to quell lingering symptoms of cabin fever and enjoy the great outdoors. As it happens, May is also National Bike Month — and what better way to enjoy getting outdoors than by exploring your community through unique, up-close experiences via bicycle?

Hagerstown’s ongoing bicycle-friendly efforts and deep-rooted commitment to safe cycling has earned the Hub City national recognition from the League of American Bicyclists (LAB) as a bronze-designated “Bicycle-Friendly Community” four consecutive years. This achievement, in combination with the scenic road-ways and bike routes, have made Hagerstown and the Washington County area well-known bicycling meccas, drawing recreational and racing cyclists from near and far. The LAB has accepted 700-plus applications for designation since 2002, and currently there are only 326 “bicycle friendly communities” that have earned LAB gold, silver, or bronze designations in the U.S.

“Bikes are the sole means of transportation for many residents, and a recreational activity growing in popularity,” Hagerstown City Engineer Rodney Tissue states. “The paths, loops, and bike lanes within the city are designed so bicyclists can travel safely. We are continuing efforts to develop ways to integrate bicycles into our existing infrastructure and improve bike riding safety. Our goal is to provide safe travel for all.”

Hagerstown’s four-time bicycle-friendly community designation is a direct result of the combined efforts of Hagerstown’s Bicycle Advisory Committee (BAC) formed in June 2010, and the city. The BAC made pivotal contributions to Hagerstown’s initial Bicycle Master Plan (BMP) that year with the city, emphasizing construction of a comprehensive network of bike lanes and routes. The BMP was updated and revised in 2016 through a joint effort of the city and the Hagerstown/Eastern Panhandle Metropolitan Planning Organization. “We also obtained vital community input through a public survey and open meeting,” explains Rodney.

The city’s bike lanes or shared bike routes are designated with bike signs and/or pavement markings. Prior to January 2011, there were 18.3 miles of all types of designated bike use paths. Today, 54.3 miles of designated bike use paths exist, a 66 percent increase in cycling-safe routes within a seven-year period. Additionally, there are 24 bike rack locations conveniently integrated throughout established city bike routes, and a new fourth edition of the Hagerstown Bicycle Map was released March 2018.

Bike commuter Joe Schmidt uses bike lanes in the city’s North End daily for traveling 10 miles round trip to and from work. “It’s nice to have access to bike lanes. If they’re not available, I look for roads with shoulders. The bike lanes keep cars away from me and motorists respect my boundaries,” he shares.

One highlight of Hagerstown’s bicycle-friendly amenities is the 10-mile “Hub City Bike Loop,” beginning and ending at Fairgrounds Park. The loop uses on-street bike lanes and multi-use paths. Offering scenic views past key points of interest, the loop skims Pangborn, City and Hager parks, the Washington County Museum of Fine Arts, Municipal Stadium, and travels within blocks of downtown Hagerstown and the Arts and Entertainment District.

Dick Cushwa has been a key player in area bicycling. Dick’s passion for cycling led to his decade-long participation with the Maryland Bicycle and Pedestrian Advisory Committee, which developed Maryland’s 20-Year Bicycle & Pedestrian Master Plan. A BAC member since its inception, Dick also helped finalize the bike tour map published by the Hagerstown-Washington County Convention and Visitors Bureau (HWCCVB). “As our bicycling community has grown, we see more needs to be done. We’ve revised intersection designations with bike boxes, and recently added bicycle-designated lanes like the one on Oak Hill Avenue,” Dick explains.

Rodney shares that improvements and additions will continue, including the goal of attaining LAB’s silver designation. “State and federal grants have played an integral part of our progress, as 99 percent of our achievements were grant-funded,” he explains. Other goals include completing the Marsh Run and Civil War trails, creating a bike-friendly link into the existing Cultural Trail, and expanding bicycle safety education and awareness for kids in partnership with the Hagerstown Police Department.

With the vast array of health benefits bicycling has, including combating heart disease, obesity, and diabetes, the considerable increase in recreational cyclists throughout the area is a boon to more than just the easing of traffic and use of fossil fuels.

For Mark Youngblood, a 20-plus-year cycling veteran, bicycling is a way to socialize with other riders while releasing stress. “I ride 25 to 30 miles per day,” he shares. “Our area has some of the best bike riding there is. You see things on a bike you would never see by car.” Mark’s logged 10,000-plus miles each of the past two years and rides with other cyclists daily.

Dick Cushwa has been riding since 1984 and has logged some 98,000 miles. His extensive riding experience provided vital input to the final mapping of U.S. Bike Routes 11 and 50. Dick has worked with the HWCCVB to map bicycle-based tours for visiting groups and clubs. “I have biked all over the East Coast and our area is a great place to ride. The Ottawa Bike Club has visited several times to enjoy our great terrain. The CVB works extensively with groups requesting bike tours.”

Bicycling has been part of Mike Mittel’s life for 50 years. A member of BAC since its inception and retired owner of HUB City Cycles, he feels very safe on Hagerstown’s roadways. “We have many spectacularly scenic roadways with low-traffic counts. The BAC and city have frequent discussions on modifications to maximize bicycle safety and improve streets to benefit cyclists.”

Ed Kantner has enjoyed cycling Hagerstown and Washington County for 30 years. “As much as 85 to 90 percent of my cycling time has been logged in Washington County,” shares Ed, who has 126,000 miles on his bike odometer. A former racing cyclist with Antietam Velo Club (AVC), he now focuses on group rides with Mark, Mike, and Joe Jefferson, among others. “It’s great to ride and talk with the group. We have a good time while being watchful and protecting each other.”

In addition to recreational riding, organized area bicycle racing events have grown tremendously. Tim Lung, former USA Cycling com-petitor and founding member of Cumberland Valley Cycling Club (CVCC), shares, “It used to be I wouldn’t see another cyclist while riding. Now you not only see more riders, but cyclists from D.C. and Baltimore coming to train. It’s nice more people are taking advantage of the area’s great cycling.”

Tim’s vision to get Hagerstown recognized as a racing center began in 1984 when he and Peggy Martin brought in a professional bicycle race — the second professional-status one held in Maryland. Since then, Hagerstown and Washington County have hosted one or two races per season, including stages of the Tour DuPont, the first big professional stage race in the U.S., for three consecutive years. “We’ve had Olympic-caliber and top professional racers participate, including Lance Armstrong during his junior racing status and Greg LeMond,” Tim recalls.

The Tour of Washington County in June has become a city bicycling tradition, drawing top cyclists from all over for its City Center Hagerstown Criterium Race, comprised of short-course sprint races for all age brackets. “Washington County is a cycling gem. There’s rolling terrain to the north and south and challenging, elevated terrain to the east head-ing toward Catoctin and west toward Fairview Mountain. Our region has great topography and layout that are quite suited to great cycling events,” shares Joe Jefferson, president of AVC and area director of Amateur Road National Championships for USA Cycling.

Washington County’s bid to host USA Cycling’s 2018 Amateur Road National Championships beat San Diego and Las Vegas, among others. The event will be held July 26–29 throughout Washington County. “This area is filled with proven race courses and offers great logistical amenities. We worked closely with Dan Spedden and HWCCVB to have required resources to win this year’s event,” shares Joe.

With more bicyclists traveling area roadways, both cyclists and motorists alike need to be aware and respectful toward each other. Motorists by law must allow bicyclists three feet minimum space for safety. “The bottom line is bicyclists have every right to be on the roadways as they are also operating vehicles. Bicyclists — as should motorists — must know and follow traffic laws and obey them at all times,” shares Dick.

“It’s the riders’ responsibility to use good etiquette and maintain smooth control of their bicycle when traveling roadways,” shares Tim. “Oftentimes, drivers get upset when bicyclists do things that don’t make sense.”

“Both motorists and bicyclists are out there together. If we remember that and are aware of each other, it will be safer for all,” concludes Mike.