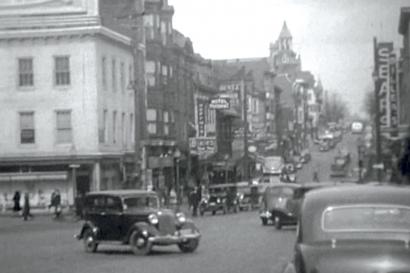 by Jennifer Mellace and photos by Turner Photography Studio

If a picture is worth a thousand words — and the Washington County Historical Society (WCHS) wouldn’t deny this — they might argue that vintage films are worth even more. For the past four years, the WCHS has been working to preserve history through the restoration and preservation of old films, mostly 16mm films with some 8mm or VHS thrown into the mix. The project started with a short film from 1950 that showed amateur footage of students leaving the Beaver Creek School House in Hagerstown to play on the playground. “Films like these have a unique historical value,” says Bob Savitt, head of the historical society’s film preservation committee, which was formed in 2015. “They provide a look at what Washington County was like in the past and can provide a way for families to recognize other relatives who they may have only seen before in photos.”

Before creating the committee, the historical society conducted a survey of local libraries and found that there was no repository for historic films, nor was there an effort to find additional movies. So, the WCHS board of directors formed the film preservation committee to collect and preserve vintage films, which would become part of the Kinship Family Heritage Research Center — Washington County’s genealogical library that houses books, photographs, letters, and other resources to assist visitors in their search for ancestral information.

“The goal of this project is to find and preserve films and then create a repository at the Kinship Center where the films can be cataloged and made available to researchers and genealogists,” explains Bob. The committee received a grant from the Mary K. Bowman Fund, which has allowed them to work with John Seburn, the owner of Vintage Video in Greencastle, Pa., to transfer the films to DVD. John has been doing vintage video restoration since the 1980s. “I have a personal fascination with local history, especially old films,” he says. “My dad was a history teacher and I guess he rubbed off on me. Old films take you back and show you what the community was like 40, 50, 60 years ago. A still photo is nice, but moving film can transport you back to that time. Every film is like a little time capsule.”

Some of these donated time capsules include a 1918 film of downtown Hagerstown, footage from the 1940 Hagerstown fair, the 1947 Colonial Hotel fire, and a 1929 film showing the Clear Spring girls high school volleyball team tossing a ball around. One of the more memorable donations was a creative compilation showing a World War II couple’s courtship and marriage.

In recent months, the committee received a donation from the Hagerstown Junior Chamber of Commerce — a silent 16mm film that was produced in 1941 by a film company based in Lancaster, Pa. The film, titled “See Yourself and Your Town in The Movies,” documented life in Hagerstown and Washington County on the eve of World War II, and featured hundreds of local citizens and dozens of churches, schools, factories, and street scenes. To identify buildings and people in this film, the committee showed the movie to older folks in retirement communities and even hosted a focus group of the area’s seniors. Later, when restoring the film, John included this information in subtitles and added music from the era.

In an effort to spread the word of the committee’s objective, the historical society has created a 13-minute compilation movie that offers a flavor of the 12 vintage films they’ve restored and helps showcase why the project is important. Housed at the Kinship Center, the WCHS has shown this film on several occasions and viewers have been able to identify buildings or people, which then helps piece together the history of the films. “This project is important because it keeps alive the memories of the past,” says Bill Maharay, the WCHS treasurer and member of the film committee.

Bill supports the oral history of the historical society speaking with seniors in the community about the films and, in the process, uncovers other interesting life stories. “I found a gentleman who was in his hundreds,” says Bill. “In speaking with him I learned that his daughter was born in the 1950s with developmental disabilities and that he and his wife were told nothing could be done to help. They didn’t like that answer and formed a group to help their daughter and others with disabilities. That group went on to become the ARC of Washington County [an organization that promotes community involvement, independence and dignity for children and adults with intellectual and developmental disabilities]. People see the films and it springboards into other interesting stories.”

The stories and history held in these old films are often overlooked and undervalued by those who own them. John urges people to think twice before throwing anything away. “Home movies are mostly personal, but every now and then you get local community places caught in the film that everyone can relate to,” he says. “You might not think it’s interesting, but to others, it is.” John also tells folks to never destroy old films — even those that have already been transferred to DVD. “Always keep your original films because there will always be new technology to transfer that original film to something of a higher quality.”

Bob and other committee members encourage the community to share old family films with the historical society. “We tell people to look in their attics and basements,” says Bob. “They’ll tell us, ‘you don’t want our old stuff.’ But we do. If there are recognizable places in these home films, that’s historical footage that a lot of people would find interesting.”

To learn more about the film preservation program or to donate old films, contact Bob via email at bobsavitt@aol.com, or by phone at 301.508.7019. For more information on this project or the WCHS as a whole, visit www.washcohistory.org.