A Taste Of Philly In Hub City 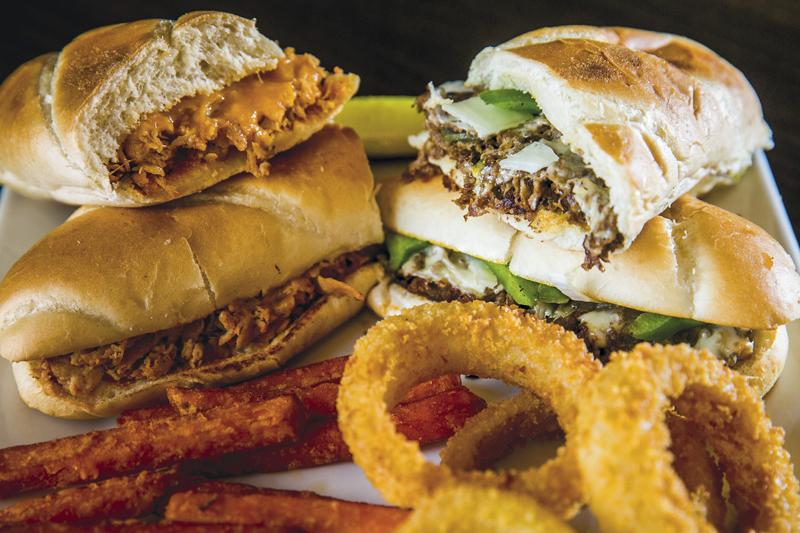 American Ale House is where the cheesesteaks are hot, the beer is cold, and everyone is welcome.

by Nicole Jovel and photos by Turner Photography Studio

The timing may have been just right. Heather Chesko, a native of the Philadelphia area, dreamed of opening a sports bar her whole life — and not just any sports bar, specifically an Eagles bar, which she opened as American Ale House on the first day of the 2017 NFL season. Little did she know, the Eagles would go all the way to the Super Bowl that season and earn the Vince Lombardi Trophy — a first for the team in 57 years. “I’ve been an Eagles fan my entire life,” says Heather. “It’s a way of life back home.”

Although her favorite team’s victorious season was a first for Heather, she’s not new to the restaurant industry. In fact, her parents have owned a pizzeria for 35 years, and Heather previously owned and operated a bagel shop in Bucks County, Pa. She came to Hagerstown by way of an internship at Volvo and saw an opportunity to bring a taste of Philly to the area and connect with other local Eagles fans.

“I would look at different properties when they were available and look at different ideas. When I called about this property [49 S. Potomac St.] and came to see it, I was blown away. I thought, ‘Is this too good to be true?’” says Heather.

With a long wooden bar, high top seating, and a handful of flat screen televisions, the space packed in a crowd throughout the NFL season. “It was so cool that the Eagles made it all the way to the Super Bowl,” says Heather. “It was huge and we have a great following now. We had people drop off jerseys and other Eagles stuff to hang up in the bar. We had about 50 Eagles fans that come in for every game.” The restaurant also includes a 40-person wooden deck outside the back door with its own full bar.

With An Eagle Eye On The Menu

The eclectic menu features classic sports bar fare like burgers and wings, as well as American bistro staples like spaghetti and crab cakes. “We’re pretty well known around town for our cheese-steaks,” boasts Heather. “I bring all my cheesesteaks, chicken cheesesteaks, and homemade wing sauce here from south Philly. We couldn’t find anything comparable, and wanted the authentic Philly meats that are sliced there, so we go pick them up.”

The buffalo chicken cheesesteak is the bar’s biggest seller. It’s a twist on the classic cheesesteak with buffalo sauce mixed in for some extra heat. With other menu items from fish and chips to shrimp scampi, Heather prides herself on offering an eclectic “melting pot” of food options. “We listen to our customers and constantly change our menu based on what they like. We added seafood items based on feedback, like crab soup and salmon, and we noticed that they weren’t into the salads so we made adjustments.” Menu items can also be adapted to accommodate special requests. The beer menu has also accounted for taste and popularity, changing from mostly domestic options when the bar first opened, to now including a variety of craft beers.

“Where Everybody Knows Your Name”

The sign on the door may not say “Cheers,” but Heather says the atmosphere is an homage to the popular television show from the 1980s. “I’m really a people person,” she says. “It’s more of a personal type of service that we provide. We sit down with the customers. You can come in and just feel comfortable. We hired a great staff who will treat each person the way I would.”

Another way Heather and her staff are getting to know patrons is by holding various appreciation nights for police, teachers, and various organizations. “We want to support local community employees,” says Heather. “We want people to know each other.” Specials have also helped the bar develop a pool of regulars, like discounts for military, first responders, fire fighters, EMS, correctional officers, and dispatch staff each Wednesday night. Other weekly specials include half-priced burgers on Mondays and half-priced wings on Sundays. Food and drink specials are posted on the bar’s Facebook page regularly, as well as details on karaoke night, which is typically on Tuesdays. Heather also works with patrons to plan private events and parties that work for various group sizes and budgets.

It hasn’t been easy along the way for Heather to see her dream become reality. In fact, American Ale House was temporarily shut down months after opening due to administrative issues with the bar’s liquor license. But the outpouring of support from the community bolstered Heather to work through the issues and reopen for her regulars and future patrons. “The town really rallied around us,” she says. “I’m a single mom and want to show my son what the American dream is all about. I’ve dreamed of opening a sports bar all my life.”

Now that Heather has conquered her obstacles and seen her dream come true, she’s looking to the future. “I might open up a pizza shop or space for private events,” she says. “I want my son to know that if you work hard and you treat people right that good things can happen.”