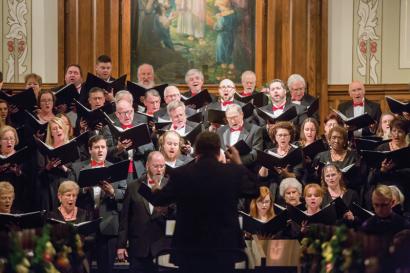 Hagerstown Choral Arts prepares for the culmination of 25 years of experience.

“May, may, may, may, may, may, may.” A chorus of 70 voices fills the Church of the Brethren’s basement level fellowship hall as pianist Mary Mae Granofsky paces Hagerstown Choral Arts through the scales during a winter night’s rehearsal. As they continue the warm-up — the choir’s volume reaching into the four corners of the cavernous space — individual voices seemingly laugh as one.

Above the rustle of sheet music and the muffle of sotto voce murmurings, Gregory coaxes his choir on its first night of rehearsal following a long holiday hiatus, by asking for the Latin lyrics. This rehearsal is the first sight-reading of Mozart’s Requiem. “I need you to do your best tonight,” he says to the mostly attentive members, before he bellows to a few naughty sopranos: “I need you to listen!”

No talking during rehearsal is one of eight tightly scripted rules outlined in the group’s appoggiaturas, which singularly translates as grace note — literally — but functions as a concise list of what-not-to-dos on the reverse of a 5-inch by 7-inch digest sized 14-week rehearsal schedule leading up to a highly anticipated 25th anniversary concert at 4 p.m. on April 21 in Trinity Lutheran Church where Gregory is also the vicar. The so-called grace notes address attendance and attire. Others address behavior.

Case in point: “Rehearsals run more smoothly when ‘chit chat’ is kept to a minimum. Please be respectful to both your fellow singers and director.” Chit-chatting comes naturally for Jack Myers, who admits the music is not easy to sing. At 94, he’s one of a handful of original Choral Arts members, and clearly by the gentle ribbing he receives from his peers, is one of its beloved elders.

“You have to look at the director, look at the music, look at the notes — almost have to be cross-eyed,” Jack says of the arduous rehearsal process. “We sing an hour and have snack time,” he adds. Chatting with a woman new to the group during the snack break, he approaches her and asks: “How you gettin’ along?” Her response: “Wow! I know what you mean.”

Wow is right. As the group dives into the requiem bar, by bar, Gregory sings its praises. “Beautiful,” he nurtures, then gently pushes the sopranos and altos to swell each time they reach a long note at the beginning of a phrase, or to add crescendo for forward motion. With every note played and sung increasing the room’s vibrations, the heavenly voices float somewhere between the crowns of heads and the fluorescent lights sprinkled amid the acoustic ceiling tiles.

If your eyes are closed you might transcend your surroundings and think you are listening to a live recording of the “Amadeus” score, or already seated in the central nave of Trinity Lutheran Church for the choir’s 25th anniversary concert.

A Place For Everyone & Everyone In Their Place

With the members facing Gregory and assembled by vocal range — sopranos to his left, altos to his right, and tenors and bass, center — his hand gestures are mindful of an orchestra conductor’s, the voices like instruments. The sopranos are the violins, he says. Altos the violas, his favorites, he admits. Gregory, who is a tenor, does not perform with the group, per se, but he will demonstrate a phrase or a run during a rehearsal.

Jack, a bass, has been singing since he was a teenager. Andrea Depre, once the choir’s youngest member, since the fourth grade. “I’m from a musical family,” Jack says. He was reared on hymns, singing in Williamsport and Washington County area churches. Coming along, he performed with his brother’s quartet, and his sisters joined HCA when it formed in 1993. “They said, ‘Jack you really need to join this group,’” he recounts. And the rest, as they say, is history.

By pairing strong singers who were comfortable reading music beside ones who were not as confident, Gregory says they populated and strengthened the 34-member choir. From those early beginnings, he has directed his singers with firm hands. “I just keep pushing them and pushing them,” he confesses, “increasing the repertoire, and it is what it is today.”

For Jack, that pushing has led him to learn more about reading music, and the experience of the last 25 years has nurtured his confidence enough that he now sings at weddings and funerals. Singing in a show choir since elementary school, Andrea wanted the assurance of belonging to a group when she graduated high school. Her parents — who both tried instrumental musicianship on piano and guitars — instilled a love of music in their daughter and encouraged her participation. Andrea, whose tastes in music genres run from classical to country and pop in between, is teaching herself to play acoustic guitar and electric bass through the Yousicians app and she is tutored on piano. Sometimes she turns up at open mic nights where she makes musical connections. And while the choir’s repertoire may be challenging, she’s unfazed by the level of difficulty.

In this early phase of rehearsal with Gregory calling for disjointed pieces, the music may sound dissonant, but like an unresolved jigsaw puzzle the pieces eventually connect. “Ready, and breathe…un… here we go, and three and four and un.” Clapping his hands together, he calls, “With me…” then, “Stop!”

Whether he’s stopping to ask his members to pencil their sheet music with breaths and holdovers, Andrea says, “Greg works hard to teach us the smallest things about a piece that the audience won’t notice, but he’s also willing to share his humorous side.” By taking time to dip his ladle into a deep well of anecdotes about his own experiences — his pedigree is impressive, both as a professional oboist performing with major symphony orchestras and teaching music at regional colleges and universities — he shies away from the one thing that sets him apart from all others.

That and a richly layered legacy of choral music ringing throughout the region, Gregory and co-founder Ned Wetherald started HCA with some local arts council seed money — maybe $500 — by auditioning singers and launching their first season with 34 members, mostly coming from church and community choirs. Today, the membership has swelled to twice that number, and while it might be entertaining to rewind the group’s storied 25-year history, Gregory is looking to the next 25.

Recognizing such a mission would require a lot of planning and support, his eyes are fixated on the prize at hand. On the afternoon of April 21, Jack is planning on donning his formal tuxedo, and Andrea on zipping her full-length black gown and fastening a delicate necklace around her vocal chords.

The two will process with their peers into the Trinity Lutheran Church sanctuary, striking a black tableau. With Mary Mae at the piano, Gregory will step behind the podium. Raising his hands and sweeping them downward, the sea of voices will meet as one, soaring above the crowns of heads, filling the lofty spaces between arched Gothic timbers, ringing throughout the town.