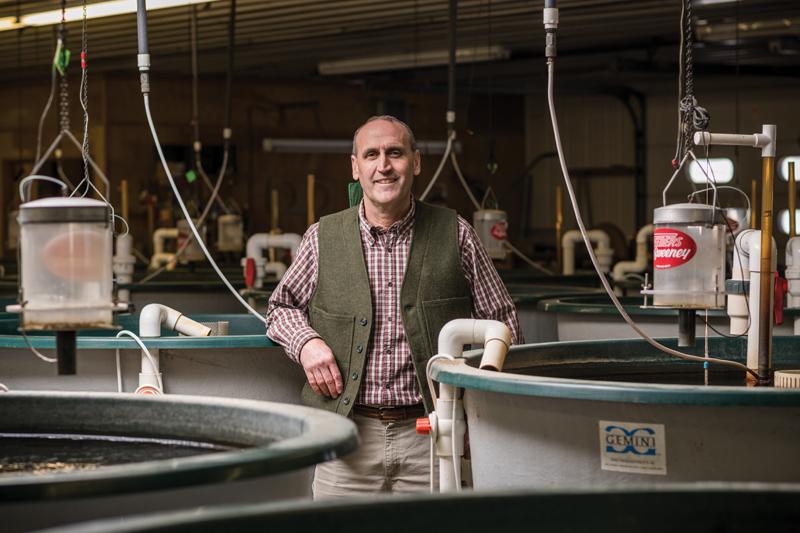 For nearly a century, Mt. Parnell Fisheries has been the breeding ground for oodles of ornamental fish.

by Yvonne Butts-Mitchell and photos by Turner Photography Studio

There’s gold in the foothills of the Tuscarora Mountains — acres and acres of it. And in the little village of Ft. Loudon, Pa., not far north of the Mason-Dixon Line, three generations of the Rice family have staked their claim across 300 acres of water to retrieve it. Their work is raising goldfish, millions of them, and for 95 years, Mt. Parnell Fisheries has been setting the gold standard in its industry.

From the familiar comets to the fancy breeds including shubunkins, sarasas, orandas, black moors, calicos and fantails, Mt. Parnell maintains 250 ponds to raise and harvest koi and nine varieties of goldfish, about 20 million fish annually. They are one of the largest ornamental fisheries in the country.

“We refer to our business as a farm and think of our fish as a crop,” says Mike Rice, third-generation manager and current vice president who has spent his lifetime in the family business. “They are living things. We spawn them here; we nurture them, watch them grow. That doesn’t feel like a product to me.”

Like other farmers, Mike knows production in spring and summer means seven-day, 80-hour weeks for him — and intense schedules for everyone else as well — but it’s in his blood. Spawning season is his favorite time of the year.

Home Of The Fish Fry

For spawning, artificial mats are placed between wires in the brood ponds, replicating the vegetation that these members of the carp family would normally gravitate toward to lay their eggs. The mats are then transferred to production ponds, some as large as three acres.

The babies, known as fry, hatch with the egg sac attached to nourish them as they grow. They first look like microscopic dots against your hand. After about a week, they look like little black hairs. Within two weeks, they double in size. In 10 weeks, they start to color, and after three months, they are available for sale. About 1 percent of the annual crop become breeders based on color, confirmation, etc. Every year, a seasoned employee culls more than half a million fish before Mike hand selects the 5,000 that will eventually become the breeders.

“The three brood yards are protected with a concrete foundation, Fiberglas sheeting, and mono-filament line overhead,” Mike reports. “If they weren’t, we wouldn’t have any fancy breeders.” While most farmers worry about losing their crop to gnawing and nibbling, Mt. Parnell loses theirs by the gulp. About 25 percent of their fish are gobbled up annually during air attacks and amphibious assaults.

A fishery has quite a challenge in finding an environmental balance where birds including osprey, herons, egrets, king-fishers, and eagles look down on the ponds as an all-you-can-eat buffet. Gulls also stop for a nosh during their spring and fall flyovers.

Below, bullfrogs, water snakes, and snapping turtles lie in wait for lunch to-go, while furry predators like mink and raccoons enjoy fine dining pond-side. Muskrats are a threat, too. Although they don’t eat the fish, they burrow and destroy the pond banks. Fisheries are also at the whim of Mother Nature. Even for an aquaculture business, too much rain is a problem. Flooding  can turn the ponds into a giant sluice, sending fish over the banks.

The Rice family has built their business on quality and take painstaking precautions in handling and caring for their fish, which has distinguished them in the market. “We’re very grateful for our loyal employees who really put a lot of effort into our quality that starts with the right genetics. That’s what sets us apart from other domestic producers,” Mike notes. “We hear that all the time from our customers. When I visit a customer location, I get satisfaction when I can distinguish our fish from others.”

The entire operation is a bio-secure area meaning employees and suppliers alike are required to take precautions to avoid bringing in contamination. All ponds are checked two times a week for parasites and diseases. Several of Mt. Parnell’s 15 full-time employees are trained specifically to identify parasites and health-related issues. Three are fish culturalists with fishery degrees. Mike’s degree is in another field, but says he’s from the school of hard knocks when it comes to raising goldfish. “After all these years, there are a few of us who can almost look at a pond and know what’s going on; then the tests confirm it,” he says, smiling.

Three to five days before shipping, the fish are harvested and placed in vats to be acclimated. An ample infusion of pure oxygen in the packaging ensures safe and comfortable air travel. Export shipments are more complicated, involving testing and approvals from veterinarians endorsed and employed by the U.S. Department of Agriculture.

Mt. Parnell Fisheries is a wholesale supplier with no retail sales. “Seventy percent of our crop today goes to the big superstore distributors, then on to retailers like PetSmart and PetCo,” Mike explains — a change from the days when many of his customers shipped to dozens of smaller pet stores. “Warm, fuzzy pets like ferrets are the thing now.”

Only half the number of wholesalers remain from 10 years ago, and according to Mike, a lot of the human touch has been lost. “My customers know we’re dealing with a live product and they can appreciate that. At the retail level, the Ma and Pa stores are disappearing, and fish have become inventory. What stores once ordered as a four-inch American fantail has become a SKU number.”

As an exporter, Mt. Parnell still maintains customers in England and Germany, but most sales have shifted to Canada. “We previously had one customer in Holland who represented 15 percent of our business, and he shipped all over Europe. Today, our customers in Europe pay more for freight than for the fish,” Mike reports.

Known simply as “the fish ponds” locally, Mt. Parnell Fisheries has been a familiar Franklin County landmark since Mike’s grandfather, Earl Rice, started his business with four ponds in 1923. Mike’s dad, Richard, took over in 1958 and still works part-time alongside Mike, who started work in 1983. Today, Mike, also serves as chairman of a six-member family board, and reports to 10 family stockholders. “This is a very labor-intensive business, but it’s very much a family atmosphere,” he notes.

“In my next life, I’m not going to deal with anything live; I’m gonna be a nuts-and-bolts kind of guy,” Mike jokes. “My dad discouraged me from coming into this business, but here I am. There is nothing more I’d rather be doing. I always knew it was in his heart, and it’s also in mine. He gave me my work ethic, my morals, and values. How many people get to be 56 years old and work several months of the year with their hero?”