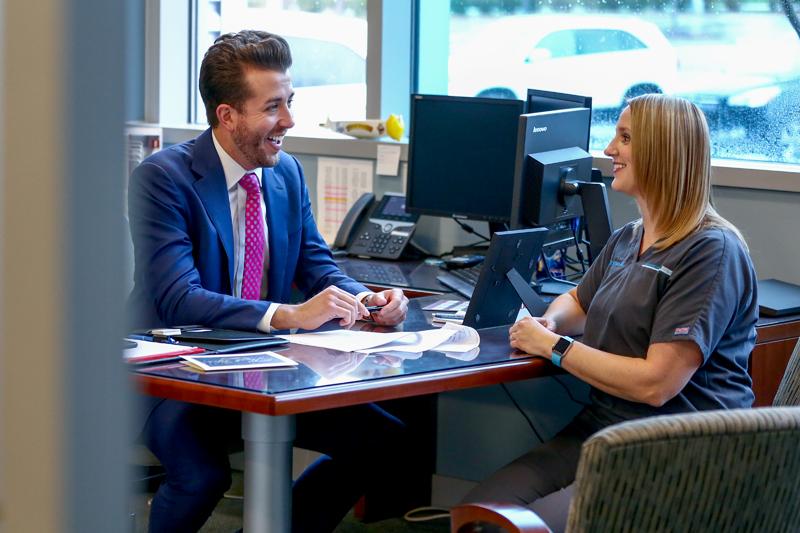 An Account Analysis Of BB&T’s Efforts To Broker A Bank In An Emerging Market Yields Positive Results.

by Pepper Van Tassell and the Turner Photography Studio

When BB&T Corp. acquired Susquehanna Bank in a $2.5 billion deal more than two years ago, the publicly-traded company began to make its first appearance in Washington County, converting nine Susquehanna Bank branches amid some concern from locals accustomed to community banking, BB&T Market President James Malfregeot notes. “This community for many, many years has been governed by community banks,” says James, who has overseen BB&T’s operations in the Western Maryland region since June 2016. “The problem we’ve seen locally is that there are so many people telling our story and we have not had the opportunity to tell it ourselves.”

BB&T was founded as a community bank in 1872 in Winston-Salem, N.C., where it retains its national headquarters. Now one of the largest financial services companies in the United States, James says it operates its regional offices throughout the country as its own group of community banks, unique to the areas they serve. With its regional office at 1800 Dual Highway, BB&T has the largest branch footprint in the region with about 44 branches in the Tri-State area, and holds the No. 1 market share, according to James. “While we do have a presence on Wall Street, we are not a Wall Street bank, we are a main street bank,” he explains.

Inside the regional office on Dual Highway — where the warmth provided by its geometric glass-paned façade glows in rectangles of orange and blue in the lobby — James, donning a bright dress shirt and colorful patterned socks, walks from the bank’s vast and largely vacant branch lobby, into its offices down the hall.

James, who hails from Clarksburg, W.Va., and attained his bachelor’s degree in finance from West Virginia University, and his master’s degree from the University of Mississippi, began his career with BB&T in 2012 through its leadership development program, and worked in the Atlanta area for a few years before being called to Hagerstown to lead its new market. “I was asked to come here because I think they needed some true BB&T blood in this market,” he says.

Banking has gone through major shifts in recent years. Legacy bankers of yesteryear are aging as financial services are evolving online, James says. “Things are advancing so quickly that you have to have energetic folks that come in with new and fresh ideas,” he explains. James further clarifies that Susquehanna Bank was itself a large financial institution with some policies that differed from what BB&T brought to the area, and BB&T came into town with a different risk appetite.

“BB&T is known for being a very conservative financial institution,” James says. “It’s been around for 146 years and it has paid dividends to its shareholders every year since 1903.”

He contends that public perception of the bank’s conservative credit culture and its sheer size shied some clients to its arrival in the county. “In a marketplace like Washington County, the assumption is that because we are such a large institution there isn’t a lot of local autonomy — and that couldn’t be further from the truth,” he says. James further explains that each region is its own ecosystem, with its own regional president. Underwriting is performed locally, and the bank’s credit partners are local, too, he says. “Our competition in this market is not necessarily in our peer group,” he adds.

Foot traffic at the 1800 Dual Highway office was light on a recent November weekday afternoon, but James said that it isn’t because of lack of business. Thanks to technology, people largely deposit checks or make bank transfers with the click of a button on their computers or phones in the comfort of their homes — a trend that has picked up pace in recent years. “We pride ourselves on our online application and our mobile application,” he said. “We have the best mobile application located on the Internet, bar none. And it’s because of our sheer size that we’re able to craft this.”

James states that BB&T has really rolled up its collective sleeves since its arrival in the area. Through the corporation’s Lighthouse Project — aimed at funneling money into communities through work for its charities — the bank invested $8,000 in services to three Hagerstown nonprofits in 2016, says Christina Grove, community banking branch banker at BB&T, who has served on the Tri-State Region Corporate Lighthouse Committee for the past two years. “The kicker in all this is that it’s not just about the money,” James specifies. “We want the sweat equity. We send out droves for these projects.”

Earlier this year, BB&T associates in Washington County built cabinets for the craft room and repainted the gym lobby wall at Girls Inc. of Washington County; made blankets and prepared care packages for hospice patients at Hospice of Washington County; and painted and installed shelving for Children in Need, Inc., Christina says. She also adds that the bank estimates the work will serve about 10,520 people — a calculation determined by the number of people the organizations served, combined with an estimate on how long the repairs will last.

Throughout the Tri-State, bank associates worked on 25 Lighthouse projects, which the bank estimates will serve more than 500,000 people, says Christina.

Robin Twigg, co-owner of Twigg Cycles, indicates that she was hesitant to shift from banking with Susquehanna to a big bank, but says that the associates at BB&T have worked hard to earn and keep her trust. “I think Hagerstown is a very tight, small-town community and I just wasn’t sure how a big bank was going to come fit into the community, and if they were going to come in and do things different,” she says.

Robin explains that she uses similar services with BB&T as Susquehanna offered — like online banking and direct deposit.And though she misses some of the old faces of her former bank, she also understands the need for change. “In business, you have to think of succession, and I think that’s what BB&T is doing,” she says. “You have to keep bringing in new blood and young blood to sustain it.”

James, who at 29 years old is one of BB&T’s youngest market presidents, hired Kyle, a 22-year-old Franklin & Marshall graduate and Smithsburg High School graduate, as one of his commercial banking officers following an internship with the bank in summer 2016. James also brought on Keith Grunow, a 53-year-old Hagerstown resident, who has worked in banking since 2001 — in recent years with BB&T regionally — and is active in the Washington County Chamber of Commerce, as another commercial banking officer. As part of his duties as a commercial banking officer, Kyle also talks with high school students about making financial plans for college, and creating a budget as part of BB&T’s GLOW mentorship program.

When the three men aren’t traveling around the area to meet with clients, they join the ranks of about 20 employees, including its own treasury team and a large group of financial experts, at the Dual Highway location. James notes that there’s a misconception about bankers that they all work at a branch. “We are not in a branch. This is a financial center,” James says.

He likens banking with BB&T to shopping at a hardware store. “Here’s how BB&T coming into the community should look to people: We are still that mom-and-pop-style hardware store, but when you walk through that store and open the door in the back, you open the door to Home Depot’s warehouse. We have the warehouse of products and services and solutions out the back door that you could get at a Home Depot or a Lowe’s. I would challenge anyone to say that they can’t find what they need in that store,” James concludes.