A Life Mastering The Skies 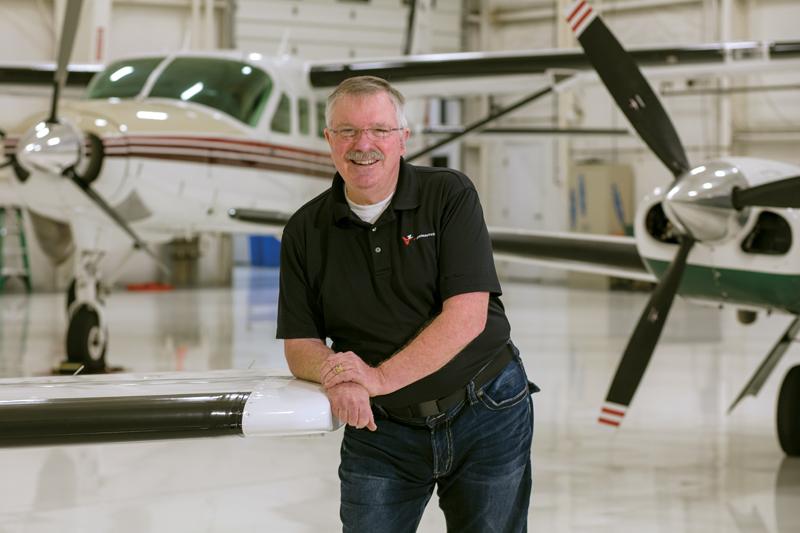 Recounting the legend of Joe Baginski, and how he earned the most prestigious award the FAA issues to pilots.

by Raymond Franze and photos by Turner Photography Studio

“Flying is completely safe. When the worst things happened to me, they were very unusual situations not customary to everyday flying — getting shot at, a tail rotor failure in the Grand Canyon, stranded on a mountain — my experience in aviation is relatively benign,” says Joe Baginski.

Joe, who is chief flight instructor for V1 Aeronautics at Hagerstown Regional Airport, received the Wright Brothers Master Pilot Award from the Federal Aviation Administration (FAA) this past September. The award — which requires nomination and letters of recommendation — is presented to pilots who have 50 or more years of civil and military flying experience, with consideration for an airman’s accident history and any enforcement actions against the pilot.

Despite its reported harmless nature, one typically can’t survive 50 years in aviation without having his fair share of stories to tell; and Joe is no exception. Born in Fairbanks, Alaska, Joe says his interest in aviation took hold at the age of 5 when he would wander from his home and end up at the airport adjoining his family’s property. The dream turned into action when he was 18 years old. A trans-Pacific flight from Australia back to the States was enough to prompt Joe to buy books about learning to fly.

Joe moved to California where he signed up with a retired Air Force colonel at a crop-dusting strip. His first solo flight was achieved in around 8–10 hours. After joining the United States Army, he continued with his flight training, eventually earning a Private Pilot certificate during his off-duty time. His time serving in the Army was where and when flying transitioned from a recreational endeavor to a professional one.

Joe was selected by the U.S. Army to fly the UH-1 Iroquois (“Huey”) and OH-6 Cayuse (“Loach”) near the Vietnamese Demilitarized Zone. Reality kicked in quickly for Joe as seven-to-eight of his roommates were killed in action during his first week in the country. He was shot down three times — twice in the Huey and once in the Loach during the war. He was awarded the Distinguished Flying Cross for completing resupply efforts for an infantry platoon that was cut off, despite taking on enemy fire that wounded each man aboard the helicopter as well as getting the helicopter as far away from hostiles as possible before the engine quit, leading to a forced landing.

While in Savannah, Ga., serving as an instructor pilot for the Army, Joe scheduled a checkride (which is an FAA examination to receive an aircraft pilot’s certification) to earn a multi-engine rating. Ironically, a lot of the training for a multi-engine rating involves flying the aircraft with only one engine operational to train pilots to successfully fly and land an aircraft in the event of an engine failure. Well, imagine Joe’s surprise when — approximately 300–400 feet above the ground where options are severely limited — the left engine quit during his checkride. Relying on his training, Joe successfully landed the crippled aircraft and ultimately earned the multi-engine rating.

A Return To Civilian Life

Joe left the Army and moved back to California where he found a short-lived job as a flagger for a crop-dusting operation. Tired of ingesting pesticide and ready to take to the skies again, he jumped at an opportunity to serve as a helicopter pilot around the Grand Canyon. “That was a thrill,” Joe exclaims when describing his year there. He stayed busy with scenic tours, helping Hollywood shoot scenes for movies and commercials, and worked on sling load operations for local reservations.

Unfortunately, Joe’s career was not immune to the volatile aviation industry. On several occasions, he was let go due to financial issues with companies that eventually went out of business. Joe left aviation for a while. He earned a master’s degree in social work from California State University-Sacramento, and later worked as a psychotherapist and family counselor. But the draw of bending the throttle proved too strong.

He moved back to Alaska where he bought an airplane and spent much of his time flying in the Alaskan bush. Nothing was off limits. The tundra tires on his plane found themselves on glaciers, riverbeds, and mountains in order to hunt or camp, which was, as Joe puts it, “as much fun as you can have with your clothes on.” Flying in Alaska involves extremely harsh conditions because of the rapidly changing weather and inhospitable terrain. While pilots in Alaska utilize their airplane like a reliable pickup truck on a regular basis, it’s important to follow certain guidelines. “You always tell someone where you are going and how long you plan to be. It’s common for two-to-three other planes to go with you because bad stuff happens up there,” Joe says. And it did. Twice.

Once, Joe and a buddy had to be rescued by the Alaska Air National Guard who used a C-130 Hercules to spot them, and a Pave Hawk helicopter to retrieve them. A second incident required Joe to make a “mayday” call to a passing Alaska Airlines plane, asking them to relay a message as he and his family were stranded on a mountain following a landing gear collapse. While Joe’s experiences may be enough for some to turn in their wings, Joe returned to professional flying while in Alaska. He gave scenic tours around Mount McKinley and flew passengers and cargo for a local airline.

Several years later, Joe moved the family back down to California where he got a job flying corporate personnel for Intel in twin turboprops and business jets. While in California, he spent a decade flying air ambulance missions. And Joe says unequivocally that the EMS job was the most rewarding flying of his professional career. “A lot of small community hospitals were just not equipped to handle certain conditions. It’s very rewarding to think of the number of lives saved because we were able to get them to the next level of care.”

Flying In The Digital Age

Of course, much has changed across the aviation landscape during the last 50 years. Aircraft construction has moved from aluminum sheet meal to composite material. Propeller-driven aircraft gave way to the jet age. Traditional “steam” gauges in the cockpit have been replaced by electronic digital displays. Radio navigational aids are on their way out as aircraft navigate via GPS as satellites pinpoint their position.

One change that has particularly fascinated Joe is the prevalence of personal tablets and software applications in the cockpit. The tablets reduce the burden of hauling a library’s-worth of books containing instrument approach plates, airport information, checklists, and operating handbooks. “I didn’t fly with an iPad until 2012. I had students coming in with iPads and I thought, ‘I don’t care how old I am, I need to learn that.’ Those things are magic. It makes flying so much easier, so much safer. The apps are capable of providing various calculations for us and we don’t have to guess what the weather will be at the destination airport,” Joe remarks. Pilots are able to see other aircraft in the area as well as weather radar data as they are afforded a great deal of situational awareness without the huge financial burden of installing new avionics in the panel of their aircraft.

Family was the inspiration to move across the country upon his retirement from CALSTAR.  Joe got on board with V1 Aeronautics where he actively instructs and serves as the chief pilot. He enjoys teaching someone new to aviation how to land a plane, the precision involved in instructing instrument students and impressing upon them the importance of being safety-conscious. Pete Quattrociocchi — one of Joe’s instrument students — notes that, “As an instructor, Joe is the most humble, kind, and accommodating person you will ever meet…on the ground. In the air, Joe’s years of training military and professional pilots comes alive; there is no room for sloppy flying.”

During the third Thursday of each month, he can be found at the airport presenting safety seminars where his experiences become teaching tools for other pilots in the community. Grateful to still be able to fly, Joe, the consummate professional, says he plans to continue to fly, “As long as I can safely.”