Laying The Groundwork For 90 More Years 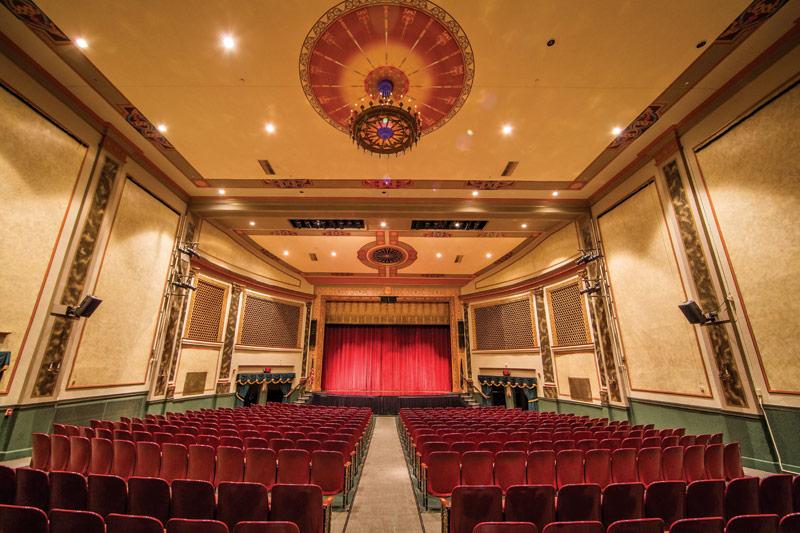 Capitol Theatre Center is entering a new era, and ready to break a leg trying.

In a test run of Capitol Theatre Center’s upcoming ghost classes with paranormal investigators, The Ghost PIT, the spirit of Wilford Binder — the theater’s original organist and one-time manager through the 1950s — presented himself to the group, says Jon Meyer, Capitol Theatre Center executive director. “When we moved into the theater, it was like an open mike night — all these spirits came out because they had someone to talk to,’” Jon relays from what he heard from guests who are sensitive to ghosts.

Playing to the theater’s strengths, specters, comedians, and young playwrights all have a place in Capitol Theatre Center’s 90th Anniversary season, which kicked off in September. It boasts three times more program offerings than seasons past — including live shows, movies, and special events — intended to draw more people to the financially-struggling arts complex in downtown Chambersburg. “One of my main, overall goals is to make sure that the Capitol Theatre functions much more for the community than it has in the past,” Jon says.

The Capitol Theatre — now with an updated, electronic art deco marquee — has cast a “C” glow from Main Street for 90 years. What opened predominantly as a silent movie theater in February 1927 with a quarter showing of “The Waning Sex” has grown into a nonprofit dramatic arts center. “It has that kind of nostalgic value and I want to make sure that’s going to continue for generations to come,” Jon adds.

Jon arrived “cold” in Chambersburg in December 2016, after serving for about five years as executive director of The Prescott Center for the Arts in Prescott, Ariz. He has more than 35 years of experience in theater, including about 20 years in administrative positions; The Long Island, N.Y., native’s career has now taken him to eight states. “It’s been my karma, if you want to use that word, for all of the administrative positions in theater that I’ve had, they’ve either been startups or theaters that have had low patronage or financial difficulties,” he says.

Capitol Theatre Center, which has been governed and operated independently by the nonprofit Capitol Theatre Center Foundation and a volunteer Board of Trustees for seven years, has operated under a $120,000 deficit for the past several years. “The Capitol Theatre is certainly my biggest challenge to date,” Jon says. “The deficit is formidable. Luckily, we have a very nice endowment fund that we’ve been able to pull out of.” In less than a year, Jon has been able to chip away at the deficit, bringing it down to about $67,000.

“While we’re not at zero yet, and are not positive yet, we are moving in the right direction,” he says.

Working against the theater was a 2016–2017 season that featured only six or seven shows, Jon says. More shows and more offerings increase the chances that the theater will make money. Building on his vision, Jon drafted proposals to add staff to support production growth at the 786-seat theater. As a result, the center now has 15 full- and part-time staffers, including a new administrative assistant and facilities employee. Among his first orders of business after taking the job was to have a seat with the Chamber of Commerce, and meet with the center’s Board of Trustees. Jon says he told them that the theater — if it continued its track — would not be sustainable.

Though the Capitol could never bring in a production like “Hamilton” due to its facilities, and can’t compete with larger theaters within a 45-minute drive, it could concentrate its offer-ings to better serve the interests of the community, Jon told them. “Like many, many theaters — not just here, but across the country — there are so many things now that are competing for people’s attention — from their iPhones to being able to stream movies anytime they want to having 250 to 300 channels sitting in their living room,” he says. Jon adds that the rising cost to attend a show, coupled with a tumultuous economy and a community struggling with poverty, has made the task of promoting theater activities that much more difficult at the Capitol.

Jon initiated his vision by drafting a 10-year plan, cranking up the number of programs, and including special events geared toward groups often overlooked in the community, including young writers and Hispanics, to help revive the Capitol to its glory for its 100th anniversary in 2027. “I said to the board, ‘Look, if we’re going to go out (because if we don’t do anything we are going to go out), let’s go down swinging. Let’s not look at the third strike,’” Jon says. “They all nodded their heads, and they followed that, and I’ve been blessed here by having an incredibly supportive board, and that is tantamount to having success.”

He successfully rebranded The Capitol Theatre Center as “Your Home for the Arts,” along with a new logo with an art deco feel. The Capitol will host “The Young Playwrights Festival” to attract younger writers — eight to ten of whom could earn the chance to produce their play on the main stage. He also introduced the Capitol Cash Saver Discount Ticket Program, which provides discounts to those who plan to attend four different presentations in the 2017–18 season. “I’m looking at the community part of it. What are we going to provide that is not out there already?” he says.

With the guidance of his show selection committee, Jon says that the current season was mapped out to include shows that the community has historically made strides to attend — including season opener David King performing “Elvis: The Man-The Music.”

Tribute concerts are aplenty: The Capitol will host a Hank Williams Tribute on Dec. 29 featuring Grammy winners Cathy Fink and Marcy Marxer, Chicago’s Robbie Fulks and Prairie Home Companion regulars Robin and Linda Williams; a Johnny Cash tribute led by James Garner on April 14; and a Crosby, Stills & Nash tribute featuring CSNsongs on Nov. 3. Magic of Motown and Rhythm of the Dance are also on tap.

Jon says that he also wants to capitalize on the theater’s most loyal employees — its ghosts — in planning the season. For $35 a session, “PNI Ghost School” — where the paranormally curious can learn how to hunt ghosts from the Ghost PIT (Paranormal Investigation Team) — will be held on select Saturdays through April of 2018; explorers can attend Open Paranormal Investigation sessions on select Sunday afternoons from November through April.

Making use of all the center’s space was also important to Jon, who said this season will make better use of The Wood Center — originally intended as its black-box theater, but underused — as host to dinner theaters, including one paying homage to Edgar Allan Poe on April 21, and an homage to Houdini on Nov. 18. The Wood Center is also rented for private events, mainly wedding receptions and parties, he says.

Ladies of Laughter Professional Winner Kelly McFarland and contestant Chris Rich will perform stand-up comedy at The Wood Center on April 28, which will be emceed by Ken Watter, “DC’s Funniest Tax Accountant,” whom Jon has known for several years. Jon called upon more old friends who have performed at previous theaters he’s managed, including Ken Hanson, whose one-man show, “Jerusalem Jones and the Mystery of the Dead Sea Scrolls,” is set for Jan. 7.

Larger shows, including “Men are from Mars Women are from Venus” on Feb. 10; the musical “Forbidden Broadway” on Feb. 17; and “Letters Home” on Nov. 12 (with free admission for veterans) will take the main stage.

The Chambersburg Community Theatre, Inc., Chambersburg Ballet Theatre and Totem Pole Playhouse also have productions scheduled throughout the season. “I absolutely, firmly believe that theater, telling stories, and comm-unicating in an artistic way is in our DNA,” Jon says, and adds, “If the schools are not going to provide it, if the government is not going to provide it, then that is what we are here for. I’m trying to perpetuate that legacy so that the children now — when they get to be 60 and 70 years old — they can look back and say that ‘I’ve been going to the Capitol Theatre for years and years.’”