The Second Battle of Antietam 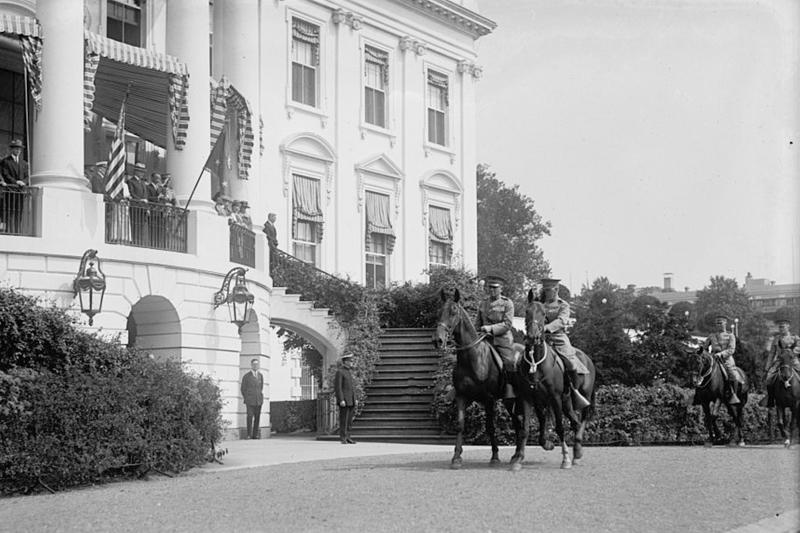 Recounting the uphill battle to save the U.S. Marine Corps.

Early in the morning of Aug. 25, 1924, more than 3,000 Marines under the command of Brig. Gen. Dion Williams marched onto waiting barges at the Marine Camp Quantico. At 4 a.m., the Navy tugboats towed the barges up the Potomac River toward Washington, D.C. Meanwhile, tanks and artillery pieces towed by trucks rolled out along Richmond Road headed for the same place.

Their ultimate destination was Sharpsburg. Sixty-two years after the historic battle, the bloodiest day of the Civil War was soon to be refought.

Despite having proven themselves to be fierce and effective warriors during World War I, politicians and some military leaders began talking about disbanding the U.S. Marine Corps after the war ended. Maj. Gen. John A.  Lejeune, commandant of the U.S. Marine Corps, understood that his Marines needed to fight for survival in the political arena just as hard as they fought on the battlefield, and devised a campaign to raise public awareness about the Marines.

One of the ways he did this was instead of going to obscure places to conduct war games and train, he chose iconic places and put the Marines out in front of the public. At the time, the national military parks and battlefields — such as Antietam — were still under control of the U.S. War Department, which meant the Marines could use the parks as a training ground.

Lejeune chose to do just that with a series of annual training exercises, which commenced in 1921 with a re-enactment of the Battle of the Wilderness. The following year, the Marines marched to Gettysburg, and in 1923, they refought the Battle of New Market.

The week-long march to Sharpsburg retraced most of the route that the Marines had taken two years earlier when they went to Gettysburg. They marched from Washington, D.C., to Bethesda, Rockville, Ridgeville, and Frederick before reaching Sharpsburg. Unlike previous years, the Marines got to ride in trucks for much of this march.

At one point, the Marines were required to march and cross South Mountain, and walked across the mountain so that the trucks would have an easier time climbing the grades. Even then, some of the trucks had to drive to Sharpsburg by way of Hagerstown because they were too heavy to cross the bridge at Keedysville.

Even in trucks, the Marines were an impressive sight, and they garnered a lot of public support and positive publicity during the march. Along the way, the Marines drew crowds that watched them march by. They also invited visitors into their camps to hear the band play or simply to talk with the Marines. Occasionally, they played baseball against local teams, and they always sought out any living Civil War veterans to invite them to come to Gettysburg and watch the re-enactments as a guest of the Marines.

The Marines reached Sharpsburg on Sept. 1, 1924. The North American Expeditionary Force consisted of the Fifth Marine Regiment (artillery), 10th Marine Regiment (artillery), and engineers, signalers, medical corps, a chemical unit, and an aviation unit. They set up their camp on the farm of E. E. Piper near Sharpsburg. The aviation group of 13 planes created a landing field next to the Hagerstown Pike, one mile west of Boonsboro.

“Like ghosts from the past, the Marines will move over the field in their formations and maneuvers and will make preparations for a battle on September 12 such as was engaged in by Union and Confederate troops in the Civil War,” the Frederick News-Post reported.

Until the re-enactment, the Marines spent their days learning about the battle of Antietam as well as modern training. They were hampered at times by cold weather and rain. On Sept. 3, lightning struck the camp switchboard, knocking the phone from the hand of Gunnery Sgt. Smith.

When the Marines were paid on Sept. 3, half of them went into Hagerstown to watch the Marine team play the Hagerstown Hubs, Hagerstown’s class D professional baseball team. The Marines lost that game 8-1, but would go on to win games over the weekend against the Shepherdstown and Sharpsburg Athletic Clubs. During the night, county residents would often see searchlights panning through the night sky and hear anti-aircraft guns firing as the Marines conducted night drills.

Sharpsburg and Boonsboro were overwhelmed with motorists and tourists during the public events the Marines hosted. An estimated 50,000 people came out to visit the camp on Sept. 7 to watch as the aviation group “did every stunt known to flyers,” according to the Frederick News-Post. They also dropped flowers on the graves in the National Cemetery at Sharpsburg. During each evening leading up to the re-enactment, the Marines demonstrated their capabilities for the public.

Six days later, the crowd returned in even greater numbers to watch the battle re-enactment. The Baltimore Sun reported, “It was the largest crowd assembled here since that September day in 1862 when General Lee matched his forces against McClellan’s fighting Yankees. They began streaming in this morning before the marines were away and they continued to arrive until after the battle was over.”

Another difference between the 1924 re-enactment from the previous ones was that these Marines wore modern uniforms and equipment rather than trying to portray Civil War soldiers. The Baltimore Sun described the battle this way: “The ground was the same but that was all. Airplanes circled overhead and swooped down low to bomb the ‘enemy’ lines. Artillery firing blank shrapnel laid down

a barrage for an advancing infantry. The infantry deployed and crept forward, while machine guns rattled on either flank. And finally tanks scurried here and there through the enemy lines, spitting fire and leveling positions.”

Members of the Grand Army of the Republic were given the best seats so that the Civil War veterans could watch the re-enactment, but only one of them had actually fought at Antietam. George W. Conner, 81, of Raspeburg had fought for the Union in Battery B, First Maryland Regiment of Light Artillery, Second Division.

Shortly before the battle commenced, an old man wearing a greycoat was escorted to the group. He was seated behind George, and it was soon discovered that he was Francis Jones, 84, of Charles Town, W.Va. He had served with Gen. J. E. B. Stuart’s cavalry division on the Confederate side during the battle and was the only Confederate veteran in attendance.

When the two men realized that they had fought as enemies 62 years earlier, “they clasped hands, pulled their chairs closer together, put their arms about each other’s shoulders and started a verbal battle of Antietam,” The Sun reported.

As the two men watched the battle, George was heard to remark, “Look at those boys. You’d think there was a dozen or two of them. Why, when our outfit marched into this battle it went shoulder to shoulder, like it was on a parade. No creeping and falling down like those boys.”

They then began recalling their memories of the original battle and seemed not to notice the battle going on in front of them. “I’ll never forget that day if I live to be 184,” Francis said. “I’ve done some work in my time, but that was the hardest day’s work I’ve ever put in.” Each one made the argument that he had been on the winning side, even as they walked off together to eat lunch after the battle ended.

The event was deemed a success, and the Marines broke camp to return home the following day. Despite the popularity of these events, Maj. Gen. Lejeune ended the program after Antietam because of the high costs involved, according to Kenneth L. Smith-Christmas in his Leatherneck article about the event. Brig. Gen. Williams, in conjunction with the U.S. Army, restarted the events as part of the remembrance of the 75th anniversary of the Civil War.