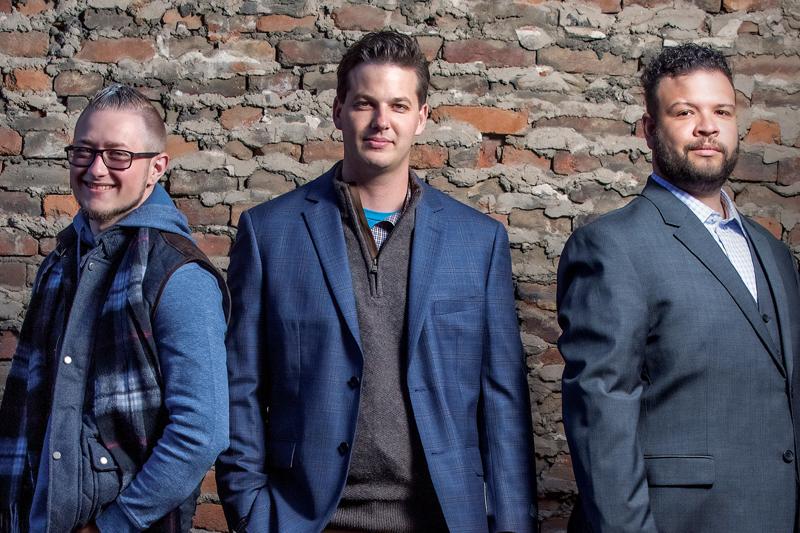 HM teams up with Tammy Anderson of Hairology and Men’s Wearhouse to spruce up local guys in search of a new look.

Story by Ellen Ternes and photos by Turner Photography Studio

Several months ago, Tammy Anderson, a master stylist at Hagerstown’s Hairology Salon, was talking to one of the male sales reps about all the new products on the market for men. “Men are taking more interest in their appearance,” Tammy says. “More men are coming into our salon for a style, for a look, not just a buzz cut.”

That’s when Tammy started thinking about doing makeovers on a few area men to show the difference some of the new styling techniques can make. She recruited three eager volunteers to come to Hairology and put their hair in her hands. As Tammy does with all of her clients, she sat each one in her chair and talked with him to learn a little about his personality and life. “What’s right for each person? What kind of hair? How much time do you put in? What’s realistic?”

After Tammy finished with the guys, Scott Chadwick of Men’s Wearhouse at Valley Mall outfitted each of them with a distinct outfit to complete their “new look,” and Hagerstown magazine was there before and after.

Works at Tractor Supply warehouse, and is a part-time student

“Very rarely will you see me in anything beyond jeans and a shirt,” Chris admits, which is perhaps why he was all the more keen on putting his new appearance in the hands of others. “I stood there and let them make me pretty.” Chris notes that he’s done some modeling before, but never quite the full-on makeover along these lines.

A chance conversation when Chris’ wife was getting her hair done at Hairology led to his participation. Tammy heard her say Chris likes to do crazy stuff with his hair, and that was all it took.

“He was very much into his look, a little edgy, and into color,” Tammy notes.

To get to the final look, Tammy added a silver color, and crafted a “faux hawk” style he could braid or slick back and hold with product.

For his facial hair, Tammy went with a chinstrap-style beard. “It’s not for every man,” Tammy says, “but Chris has a strong jaw line that’s good for it.” And she finished him off with waxed eyebrows for a clean look.

For the clothes, Scott outfitted Chris with a weekend warrior look that’s casual and layered, with a plaid scarf to add a cool highlight. “It’s definitely out of the box compared to what I typically go for,” Chris says.

Tammy: “Clean and sharp. Everything really comes together in his look.”

Chris: “I was very pleased. I thought everything looked really good.”

Friends and family: His mom liked the silver hair — it matched the colors of her wedding that weekend. “My wife liked it all,” Chris shares.

Future: “I tend to switch it up quite a bit, but this look will definitely hang around for a little while.”

Anthony’s wife is the cheerleading coach of Tammy’s daughter. “She came home from practice one night and asked me if I wanted a free haircut.” The rest, as they say, is history.

Tammy immediately took notice that Anthony kept his hair short because it was just easier to deal with. Anthony admits he has no inclination toward style in regard to his hair, and notes his wife typically cuts it. Tammy’s first assessment was to cut his hair short and tight, and thought a textured style toward his face would be the way to go. “But when I was shampooing him, I saw how good he looked when his hair was away from his face,” Tammy says, so updated her plan accordingly.

For the hair, Tammy cut a clean, tapered look, leaving behind a little chaos of curls that would be very easy and manageable to work with going forward. She also kept his full beard intact, but trimmed it for a cleaner look. For the outfit, Scott chose for Anthony a classy three-piece suit, and modernized it a bit with a plaid shirt for a pop of color.

Tammy: “He can wear his hair slicked back or a little messier with the curls. His beard has a neat look.”  She also showed Anthony how to use oil to control both going forward.

Anthony: “I loved it. It was awesome.”

Friends and family: People at work told him he looked younger, and his wife and daughter loved it. “My daughter saw the ‘before’ pictures and said, ‘You don’t look crazy anymore.’”

Future: He now takes the time every morning to style his hair and beard, and is planning to see Tammy once a month to keep it up. “This is coming from a guy who hasn’t done anything with his hair all his life,” Anthony says.

A fellow firefighter who is Tammy’s cousin asked Mike if he had any interest in getting made over. “My first reaction was sure, I love Hagerstown magazine, I read it every chance I get.” (Editor’s note: Sorry for the shameless self-promotion, but there was no way we weren’t putting that in here.)

Tammy notes that Mike was open to whatever. She had initially planned to give Mike a shorter look, after his hair got longer, but saw that it had a natural flow. “He has a long, thin face that wears that hair well.” Tammy adapted her plan and gave him a “modern man, classic cut,” with more of a natural flow, and styled it with a touch of mousse to help create texture and movement. She finished the look with a complete shave, and shares, “That cut looks best without facial hair.”

Tammy: “Whether he’s deejaying or firefighting, it’s a style he can do a lot of different things with.”

Mike: “The clothes are a more modern spin on what I normally wear,” Mike says, but notes that each of the outfits they donned captures something different from what he would normally wear.

Friends and family: “My fiancée said it was phe- nomenal,” Mike says. And at the firehouse, everyone’s been positive. Even the chief remarked that his hair looked better.

Future: “My fiancée says absolutely keep it, and to keep going to Tammy,” Mike shares enthusiastically.