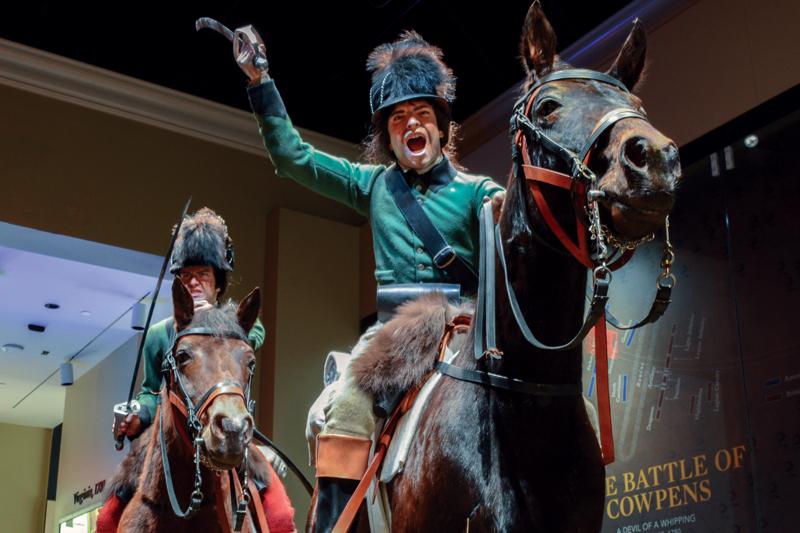 The new Museum of the American Revolution is a great educational excuse to visit Philadelphia.

Everything you will ever want to know about the American Revolution can be found at the Museum of the American Revolution in Philadelphia — and it’s only fitting that the museum, which opened this past April, is located here. Before, during, and after the Revolution, Philadelphia was a hotbed of activity. The 56 members of the Continental Congress met in Carpenters’ Hall for many months while drafting the Declaration of Independence, the official signing of which was in Independence Hall on July 4, 1776.

After the war, in the years before Washington, D.C., was built, the new America was developed in Philadelphia. Our first two presidents, George Washington and John Adams, lived here, as did two other key historical figures, Benjamin Franklin and Alexander Hamilton.

The museum was 11 years in the making and cost some $120 million when completed. The architectural firm of Robert A.M. Stern gave careful thought to designing it so that the building would fit in with the many 18th-century buildings that surround it in the Historic District. Along with this, there was the acquiring and curating of the thousands of artifacts that fill the 118,000-square-foot museum and its 16 galleries.

On entering the spacious lobby, your eyes are immediately drawn to the rotunda ceiling, then to the spectacular sweeping staircase leading up to the main galleries. To get a summation of the collections and history you will be privy to, viewing the 15-minute film “Revolution” in the first floor theater is definitely recommended.

On the walls hang huge, gorgeous 19th-century paintings, including William B.T. Trego’s “The March to Valley Forge,” a portrait of George Washington by Charles Willson Peale, and a portrait of the Comte du Perron by Laurent-Bruno Francois Jourdain to name a few.

Artifacts on display range from a set of Washington’s engraved silver camp cups to a soldier’s pocket-size King James Bible and intricately carved powder horns. There are also muskets, French and British swords, wooden canteens, the first newspaper printing of the Declaration of Independence on July 6, 1776 in the Pennsylvania Evening Post, and a pair of English holster pistols that belonged to Brig. Gen. Peter Muhlenberg. And, a rare find, a 1740 American-made war drum dated and signed by the maker, Thomas Crosman of Taunton, Mass., is also on display.

A visit here is a total immersion into the exhibits with life-size dioramas depicting crucial events leading up to and during the war. And you can stand underneath Boston’s Liberty Tree while listening to stories of how the colonies will gain liberty from the British, learn how to lead an infantry charge during the Battle of Brandywine, or step aboard a privateer ship to see what life was like on the high seas during the Revolution.

The galleries are presented in chronological order of some of the major battles. The first details the Battle of Lexington and Concord on April 19, 1775, then it’s on to the Battle for New York — the first major battle after the signing of the Declaration of Independence, and so on. The last gallery is of the final battle at Yorktown where General Cornwallis surrendered to General Washington on Oct. 19, 1781.

The foremost artifact in the collection is Gen. George Washington’s war tent. Alex McKechnie, the museum’s public relations manager, explained via email the conservation process that was used on the tent: “Textile conservator Virginia Whelan spent more than 500 hours conserving the tent. Whelan said the tent was in ‘great shape’ although it had yellowed over the centuries and there were ‘losses’ — small holes — which needed to be repaired so that the original material didn’t fray. The painstaking process involved inserting a fine needle and thread between the fibers of the tent’s weave and using netting to stabilize the holes.”

In all, the tent’s restoration and preservation proved quite an undertaking, costing $75,000 due in part to the fact that it measures 23 feet long by 14 feet wide and is made up of three sections: Washington’s office, a storage room, and his sleeping quarters.

“The conservation effort also entailed using digital inkjet printing to produce new fabric that matched the original material,” Alex adds. “The new swatches were then used to repair holes, rips, and a large piece that had been cut away. For this part of the conservation, Whelan partnered with faculty from the University of Philadelphia’s textile design department. After the war, Martha Washington’s grandson, George Washington Parke Custis, stored the tent at his estate in Virginia, Arlington House. Custis’ daughter, Mary Anna, wife of General Robert E. Lee, kept the tent until it was seized by Federal troops during the Civil War. It was in Federal possession for 40 years before it was returned to the Lee family.”

A short film detailing the harsh winter conditions that Washington and his Continental Army endured at Valley Forge precedes the viewing of the tent through a glass partition.