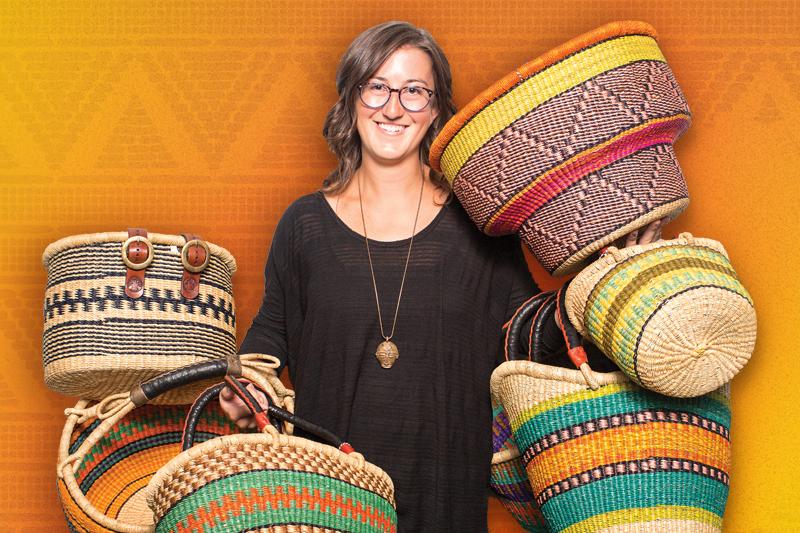 Hagerstown native Erin Ruff helps provide education to young Ghanians one tote at a time through The Kisseman Children’s Foundation.

Story by Pepper Van Tassell and photos by Erin Ruff

In the shade of a solitary tree at the paved heart of Kisseman Village, surrounded by the cinderblock homes typical of a Ghanaian compound, Erin Ruff sat for her first lesson in Bolga basket weaving. She watched as children — as many as 50 living a short distance from nearby schools — flocked to the sunlit tree to pick scraps of paper to scribble on.

Within days of arriving in the West African country as a foreign exchange student in 2010, the 22-year-old Hagerstown woman emerged as the only volunteer to offer help to Beatrice Baako, a Bolga native, who timidly asked a group of foreign exchange students at The University of Ghana for help tutoring the children of nearby Kisseman Village in exchange for lessons in basket weaving.

As Erin walked to her first lesson through the compound’s maze of homes, she watched as children hawked kerosene, carried water, and cared for infants. She later sat, lacing dyed elephant grass. And as more and more children ran to Beatrice for instruction, Erin started piecing together the landscape. “The more I started weaving lessons, the more I started to get to know the kids,” she says. “Beatrice explained that they weren’t in school because they couldn’t afford to go to school. So I stopped weaving, started teaching the kids, and it sort of all began there.”

Kisseman Village — which is on the fringe of Accra, Ghana’s capital city — is overpopulated and poor. It’s a place where children are expected to earn money for their family, and where families rarely risk losing cash to put a child in school who could otherwise support the family. Erin says that children who can’t afford the school fees often stand outside the classrooms, peering into the windows.

After two years spent dreaming with Beatrice — first side-by-side teaching the children to the rise and fall of the sun, and then over the phone, after Erin returned to the United States and began selling Beatrice’s baskets to pay for two children’s school fees — the pair formally created the nonprofit The Kisseman Children’s Foundation.

In the five years since, the cross-continental organization has provided scholarships to 22 Kisseman children, each covered for 16 years of private school fees, which rings up to roughly $7,000. In the last three years alone, the group has raised $102,000. Now 29 years old, Erin is in the midst of a “30 by 30” scholarship drive to gain eight more scholarship sponsors before her 30th birthday in February. “Neither of us thought that it would get to this point,” Erin says.

The University of Colorado fine arts major had planned to spend the five months of her senior year on the edge of the Atlantic, a few degrees north of the equator, wandering Ghana’s forest and sea landscapes, and studying its vibrant arts culture, but she became driven in the detour to Kisseman. She taught the children what she knew: art, and how to draw, how to write their names. “Kids started pouring into the compound, and I was like, ‘This is crazy. There are so many kids in here,’” Erin says.

Erin quickly realized that she needed help, and adjusted her internship through The University of Ghana to dedicate her time outside the classroom to Kisseman. The 2006 North Hagerstown High School graduate contacted friends and family in town for help, and parents at The Hagerstown Children’s School collected art and school supplies like paint, pencils, and lined paper and sent them to her. “That helped me get much more organized under the tree in the middle of the compound,” she says.

The children of Kisseman and Hagerstown Children’s School later exchanged artwork and photos of themselves. “The kids knew when Auntie Erin is at Auntie Beatrice’s house, lessons start,” Erin says. “As soon as they saw me, they would come running…when I got off the TroTro (bus), I could hear (whispering) ‘Auntie Erin is here. Auntie Erin is here.’ Word spread pretty quickly.”

When Erin left Ghana, she made a vow that she would sell Beatrice’s baskets to raise money for the children. “I didn’t want to just end it there,” Erin says of leaving Ghana. “I knew that I had to keep doing something, so it was just nonstop ‘What can I do to make something happen for these kids?’ I thought I could at least sell the baskets and see what happens.”

In two years, Erin has sold more than 1,000 Bolga baskets (which range in price from $30–170) at festivals and markets throughout the region, and online through The Kisseman Children’s Foundation affiliate, Baskets for Education. When Erin returns to Ghana — a trip she makes at least every two years — she arrives with bags filled with school supplies, and leaves with bags stuffed with baskets to save on shipping costs.

As Erin initially just sold baskets to family and friends and while working as a waitress, she started paying the school fees for two special Kisseman children, Sammy and Juliet — both of whom attended Erin’s daily lessons. She had to convince parents of both children to allow her to pay for their schooling, which is now paid for by the foundation. “To me, the greatest achievement is that they love learning and love being in school,” Erin says. “It’s so awesome to see them sitting in their uniforms with other kids in their village. I don’t think they ever thought that they would be able to do that, and I don’t think their parents ever thought that they would be in school.”

The organization now has an office in Kisseman across the street from one of the three private schools that its scholarship recipients attend. Every day, Beatrice’s son, Dominic Akonkaliko, leads afterschool lessons, teaching about 100 students a day.

“Eventually we would like to have a building as our own community center,” Erin says.

Beatrice — who remains in Kisseman — has financial stability, and a stronger grasp of English now. She runs the Kisseman Children’s Foundation from Ghana alongside Dominic, and her basket-weaving business has grown a good deal. The foundation now buys its baskets from a partner-weaving co-op in Ghana, as the demand is too high for one person.

Beatrice wrote in an email, “The best thing is I’m so happy with all the things we can do for the kids. We can help them with school fees, schoolbooks, bags, all those things. I’m so happy with everything.” Now, about three foreign exchange students a semester volunteer through Kisseman, and Beatrice teaches basket weaving regularly for the University of Ghana’s study abroad programs. “To see what has happened to (Beatrice’s) confidence — as far as being a woman in Ghana, and being able to empower her village — it’s just amazing,” Erin says. “Families look to her as the caretaker of Kisseman. They know that they can rely on her.”

Erin, the executive director of the foundation, texts every day with Dominic, and speaks every week with Beatrice. She recently moved her cache of Bolga baskets from the attic of her Hagerstown home to Mulberry Lofts, Suite 319, in Hagerstown, which serves as her office and a showroom for Baskets for Education, which is open by appointment.

In behavior support at Ruth Ann Monroe Primary School in Hagerstown, and pursuing her master’s degree at Mount St. Mary’s University with plans to teach art, Erin says that she often feels like she’s bridging two ends of the education spectrum. She admits to having felt guilty for taking her own education for granted after her experiences in Ghana. And after returning to the U.S., wanted to feel the pride she saw in the faces of her students in Kisseman, so returned home to work at Washington County Public Schools to help kids understand their options, and their privilege.

“Many of the students I work with do not want to be in school,” Erin says matter-of-factly. “I think it is my job to connect with these students in hopes that I can reach them, and help them understand that education is their ticket to anything they want to do — they just have to get through school to make it happen.”

One in 10 children is out of school in Ghana. To help Erin and Beatrice change that, baskets, totes, and other items can be purchased at their website: www.kcfghana.org.