Women Of The C&O Canal 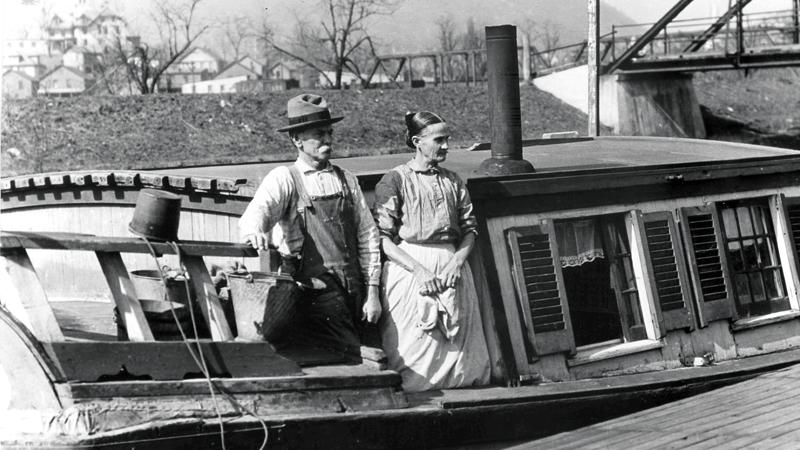 In the 19th century, the major transportation projects in Maryland were the construction of the Chesapeake & Ohio (C&O) Canal and the Baltimore & Ohio (B&O) Railroad. These innovative projects held the hopes of a young nation in accessing the wealth of the west. Running alongside the Potomac River, the C&O Canal was a flat-water route with locks that raised or lowered boats as needed to make up for changes in elevation. Originally intended to connect the Ohio River to the eastern seaboard, the C&O was constructed in Georgetown in Washington, D.C., and only made it as far as Cumberland, Md., as a waterway for transporting coal, flour, wheat, lumber, and corn. Today its 184 miles are a National Historical Park run by the National Park Service and enjoyed by over 4 million hikers, bicyclists, and nature lovers every year.

Often overlooked in the history books, women played an important role in both the construction and operation of the C&O Canal. Because of the predominantly agricultural area through which it ran and the lack of workers, the canal company turned to England and Ireland to get both unskilled general laborers as well as carpenters and stonemasons. These men arrived on the Atlantic shores without wives or families. But poor living conditions, long physical days, and scant food soon became labor problems and threatened the completion of the canal. When the public learned of the dire conditions, the company hired women as cooks for the laborers. The company took roughly half the women’s salaries for room and board, while laborers were charged a third.

During the operation of the C&O, women could be found doing the jobs of lockkeeper or operating a canal boat — especially if a woman’s husband died — both jobs requiring significant physical strength and endurance. At least three women captained boats during the canal’s operation. Some women owned canal boats as well. “While the dominant ideal of womanhood in the 1870s and 1880s imagined that women thrived best in domestic life, millions of women had to work for a living,” says Robyn Muncy, interim chair of women’s studies at the University of Maryland.

Women For All Seasons

Arising at first light and not retiring until dark, a woman’s life on the canal was hard. On the canal boat, her responsibilities were steering, cooking, cleaning, sewing, and child rearing. A trip down the canal with a load could take five to seven days, and with such a transient life, school for her children was not feasible. Indeed, most children were needed to watch over the mules, which towed the boats, or as an extra pair of hands on board. It was not uncommon that some children grew up to become boat captains themselves. But due to the lack of education, several captains were illiterate and five wives were found so as well.

Born in 1819, Eliza J. Reid married her husband, William Hammond, in 1842. Together with their six children, they farmed in Bakersville, a small crossroads located in the southwestern portion of Washington County between Keedysville and Williamsport. After William’s death, Eliza, at age 53, purchased a canal boat in 1872 from one of the canal’s leading boat builders, Frederick Mertens, for $1,800 and named the boat after herself. Working for the Central Coal Company, she brought down coal shipments averaging more than 110 tons of coal on each run, and paid Frederick $40 of the amount she made for each trip as a mortgage.

In 1873, she completed 16 round trips on the canal, roughly the same number as most men completed. Although Eliza’s background was in farming, the canal was becoming an important source of wages for her family as her son Clinton and sons-in-law William Hershey and William McCoy were working on the canal in the 1870s as well.

As a captain, Eliza would have arranged for her crew (typically 3–5 people) and would bring her boat to Cumberland to be loaded with coal for the trip. All the windows of the boat would be closed and all crew and animals off it until the coal was loaded. After loading, the boat was swept off as coal dust covered every nook and cranny. Eliza would have made provisions for the trip down, including feed for the animals, and the crew would board and begin the trip. As boats passed Lock 75, each one was recorded for the registrar. Eliza could acquire fresh produce from the famers or lockkeepers along the way. Once at Georgetown, the coal would be off-loaded and the captain and crew could begin the trip back up to Cumber-land — albeit at a much swifter pace. An average load of 110 tons of coal would bring the captain roughly $90 in 1873.

Born in 1844 in Tilmington, Nancy James was a child of the canal. Her father and brother worked their boats on the canal transporting coal and flour. She married her husband, Timothy McCoy — also a boatman and himself a child of the canal — in 1867 when she was 23. For 30 years, the McCoy boats operated on the C&O, during the most productive period and in the late 1800s when canal trade dropped substantially. The McCoys operated boats with colorful names like Judge Stake and Here I Am, carrying coal for Consolidation Coal Company and New Central Coal Company. With her firsthand experience, Nancy would know how to do the jobs required of a captain, including steering the boat into the tight areas of the locks, changing mule teams, and where and when boats could put in to replenish food.

The most productive year of the canal was arguably 1875 when roughly 500 boats carried 973,805 tons of cargo. In 1877, the McCoys brought down 1,892 tons of coal and earned roughly $1,560 (equal to approximately $34,800 in today’s dollars), which doesn’t account for boating expenses. That amount dropped over 50 percent by 1888 when canal trade was deeply impacted by the effects of competition. Since the cost of the crew came out of the captain’s earnings, Nancy’s labor on the boat meant the McCoys could avoid having to hire additional staff. The boat Judge Stake, captained by Nancy McCoy in 1893, brought over 100 tons of coal down the canal in one trip alone and doubled the family’s income. In August of 1900, Timothy McCoy died from “paralysis” — likely a stroke — while Nancy “was in Washington,” perhaps having taken a coal load down the canal. Nancy died in 1907 from the same affliction.

After the canal company went into receivership, the Canal Towage Company owned most of the boats, replacing the uniquely named boats with new boats with generic stock numbers. Individual owners, whether male or female, were mostly now a thing of the past. By 1924, strike, droughts, floods, and competition sealed the fate of the C&O Canal and it ceased operations. Its captains and lock keepers turned to other occupations, but the towns of Washington County — Sharpsburg, Bakersville, Tilghmanton — where so many of the canal boat families lived, are forever con-nected to our nation’s great experiment: the Chesapeake & Ohio Canal.