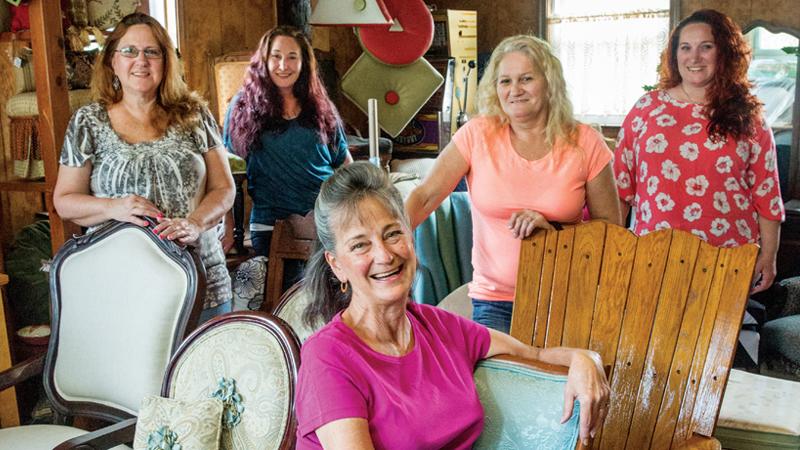 For these local businesses, working with family makes business all the more rewarding.

by Beth Vollmer and photos by Turner Photography Studio

The Hulls also have a line of sublimated clothing called RavaWear, named after their daughters, Rachel and Ava. The RavaWear line focuses on products like shirts, hats, and jackets. And it’s worth mentioning that the sublimation process is when clothing is decorated, and through the infusion of heat and gas, it produces an embellished cloth where the image is dyed on.

This family-owned business thrives by dividing up the day-to-day duties with everyone working side by side in a fun and inviting work environment. The family consists of the company’s president, Jeff Hull; his wife, Beth is the secretary; and Jeff’s father, Terry, is the vice president, and mother, Donna, is the treasurer. The tight-knit crew manages to keep their work and home lives separate, which allows them to still be a family, both at work and at home. And for all of them, seeing a person wearing one of their items when out in the community brings a sense of family accomplishment, which they say is the greatest satisfaction a local family business can get on a personal level.

Part of being a family-run operation is the advantage of bringing the kids into work because school let out early, or if their dog, Snickers, a whoodle (wheaton terrier/poodle mix), is there because he needs to go to the groomer. And when Snickers — who customers know by name — is at work, he changes roles and adapts from being the family dog to the shop dog.

Running In The Family

Daryl Henry of Bitner-Henry Insurance Inc. is the son of the company’s president, Stephen Henry, and is a fourth-generation agent in the company that began in July 1938. In addition to standard personal and business insurance products, Bitner-Henry Insurance provides insurance and risk management solutions to churches and nonprofits. For this agency, the family dynamic is very familiar even for those not in the bloodline, with many of the employees having been with the company for over 10 years. Daryl’s parents have had the privilege of watching employees grow from being inexperienced to leaders in their profession.

Daryl says that it’s easier to work with family because the group can basically read each other’s minds, and as a business partner and a coworker it’s really valuable to anticipate how Daryl’s brothers or his parents will respond to a situation. Daryl adds that while working together there’s no sense of fear in communicating shortcomings, and being open and honest with each other only helps them grow personally and professionally.

The agency started with Daryl’s great-grandfather, Orville Bitner, selling home and auto insurance by knocking on doors during the Great Depression and stopping at houses that had a car out front, and Daryl’s grandfather continued the agency on that path. Daryl’s dad changed the path of the agency after getting his divinity degree to become a pastor, and began working at a nonprofit called Circle Urban Ministries. Daryl’s dad eventually decided to start selling insurance again, and almost immediately, a representative from Brotherhood Mutual Insurance Company offered him a contract — Brotherhood Mutual is a specialty company that focuses on churches. That was about 25 years ago, and now they are the largest Brotherhood Mutual agency in the nation.

Eight years ago, Daryl was determined to grow the agency and expand outside of churches. Daryl found success focusing on nonprofits, since his grandfather helped start Cedar Ridge Children’s Home and his dad has sat on church and nonprofit boards since he was a young man. Daryl continues his father’s community-minded passion by sitting on the Boy Scout Council Board, and most of Bitner-Henry’s agents serve on church boards. As an organization, the company best understands churches and nonprofits because that’s who Daryl’s family are as people, and he believes “in order to protect an organization, you have to understand their strengths and their vulnerabilities — and it’s always easier to do that when you love something.” Daryl also believes that people everywhere deserve an agent with a servant’s heart — and that’s what Bitner-Henry tries to be.

The Kipe sisters, Cheryl and Nancy, have a very close family, working with their hands beside their father and learning to sew from their mother. These skills were instilled and honed at a young age because, as their father said, “If you have a skill and offer a service, you will always have a job.” Kipe’s Upholstery has always operated the business under the golden rule Cheryl learned as a child: “Do unto others as you would have others do unto you.”

After their mother taught them hand sewing and how to use the sewing machine, Nancy sewed her first dress when she was just 6 years old. Their mother also taught them not to rely on what the instructions on a pattern said, and they learned to make the most out of fabric and make things better their own way. Cheryl and Nancy both got jobs in fabric stores at a young age, and both have developed a great appreciation for fabrics and an eye for seeing how something will look when it’s completed.

The Kipes are five women who are friends as well as family. They laugh a lot and if disagreements arise, they talk, hug, and go on. The happiness that is shared in the workplace naturally flows over to the customers as the Kipes freely give hugs and smiles to customers happy to return the same.