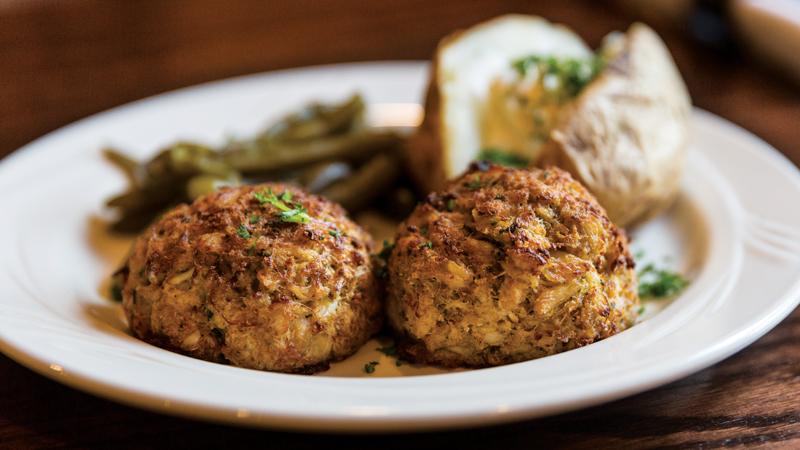 By renovating a historic building, B Street 104 taps into Greencastle’s rich history, bringing with it rich and delicious flavors.

Kevin Benner got his start in the restaurant business in the early ’90s working at The Antrim House on Baltimore Street in Greencastle, Pa. Now, Kevin owns the restaurant in that same space, which underwent considerable renovations and a name change before opening its doors in August 2016.

The building is a historical landmark that once housed The Antrim House, Hotel McLaughlin and Gem Theater, which later was known as The State Theater. Kevin and his team gutted and renovated the building, including its kitchen and restrooms — a process that took about eight months, he says. “Everyone says how beautiful it is,” Kevin notes. “My response is that’s what you get when you spend twice as much time and money as you thought you would.”

The work was extensive, but Kevin says his goal was to maintain — and highlight — the history of the building and the Greencastle, Pa., community. “I had my doubts when we first walked through [the building],” he says. “It was a mess. The kitchen was a disaster. We totally renovated and updated the entire kitchen and banquet room.” Today, the 8,500-square-foot restaurant features open seating, two meeting rooms, a well-stocked L-shaped bar, and a banquet hall that seats 150.

Going Back In Time 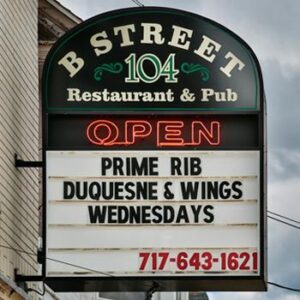 The building that houses B Street 104 was known as The Antrim House when it was sold to Harry W. “Mac” McLaughlin in 1904. Mac later replaced the original building with a three-story hotel known as Hotel McLaughlin, and in 1911 the Gem Theater was added and changed its name to The State Theater. Mr. and Mrs. Joseph Henson bought the property in 1973 and then in 1976 sold it to the Greencastle Lions Club who then sold to Don and Ann Hummer, who owned and operated the business until 2005. During this time (when Kevin was cutting his teeth in the restaurant business), the name was returned to The Antrim House.

The restaurant portion of the building most recently housed The John Allison Public House before Kevin took over the lease on the restaurant and banquet room. During his renovations, original metal walls and decorative ceilings were maintained when possible, as well as some original tile flooring and stained glass windows. For about six months, Kevin collected prints by Pennsylvania artist Mark Twain Noe commissioned for the First National Bank.

“I collected them from estate sales and some people that I knew had them,” Kevin says. Those historic prints now line the dining room, along with old theater playbills that were uncovered during the renovations. He also found a 1940s parts manual to the projector for the movie theater.

“Everybody says you need a theme,” Kevin says of his decision to highlight local, historical memorabilia at his restaurant. During the renovation, the deed to the building was also discovered. Dated 1796, the original deed has been preserved, and a copy of it is also displayed in the dining room.

Kevin worked as a farmer before the draw of being a restaurateur got the better of him. From his humble beginnings, he went on to own the Antrim House in Fountainhead Plaza until 2003, and he then opened the popular Runways Restaurant & Lounge in Hagerstown, which was inspired by Kevin’s passion for aviation. “That was one of my loves — my hobby when I was younger,” he says. He brought some aviation-inspired memorabilia to B Street 104 as well, including an aviation chart from 1945 that hangs in a dining area. “I had been out of the restaurant business for a while. I got back in at Runways, and that was a confidence builder. [B Street 104] became available and I felt there was more potential here than at Runways,” Kevin says.

The menu at B Street 104 consists of a lot of the staples Kevin implemented during his time at Runways, which he owned for 13 months. That includes the popular (and delicious) propeller fries, which are a unique take on french fries that offer a thicker wedge in a curled shape. “What I started at Runways is what I thought this area needed,” Kevin says.

The menu at B Street 104 is best described as American fare, and features the ever-popular prime rib that is slow-roasted and seasoned with fresh herbs and garlic — though only available on Wednesdays, Fridays, and Saturdays. B Street 104 also taps into the history books by using the same recipe for house dressing that was served in the old Antrim House. Other popular dishes include crab cakes (single, $15.95) and Kevin’s personal favorite, the grilled Reuben ($8.95). “We serve everything from a hamburger to a filet and a fish sandwich to crab cakes, as well as salads and appetizers,” he says.

B Street 104 has two small meeting rooms that Kevin says are popular lunch-time meeting places. One seats 20 people and has a big-screen television, and the other seats about 24 people. Renovations to the restaurant’s banquet hall were just completed in March, but already B Street 104 has hosted several large events, including a class of 1967 Greencastle High School reunion attended by about 85 people.

Kevin is considering naming the banquet hall “The Gem,” as a nod to the former theater that operated in the space. The banquet hall has also hosted the popular dueling piano group, Cutting Edge Dueling Pianos. Those events, which sold out quickly, were held the day after Thanksgiving in 2016 and on St. Patrick’s Day. Now that the restaurant is nearing its one year anniversary, Kevin says he is looking at growing the business to include off-site catering.

A Taste Of History