As Good As New 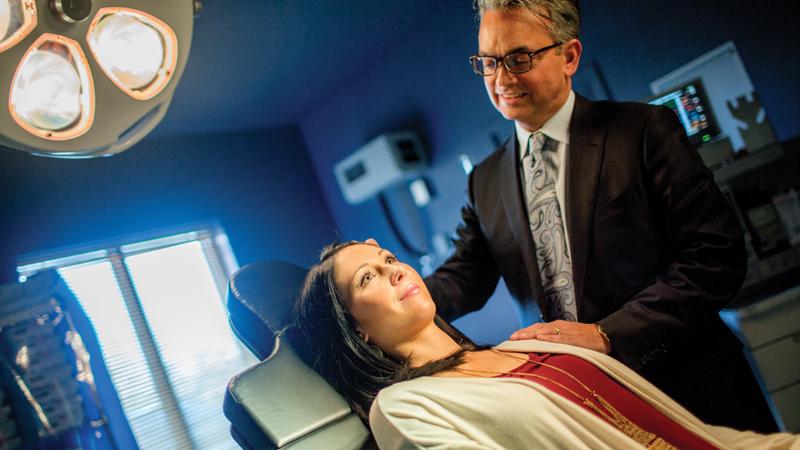 Cosmetic and reconstructive surgery can be a daunting prospect, but new procedures are leading to quicker recovery times, and even better results.

Pam DeHaven of Martinsburg, W.Va., had what she called “hooded eyelids” — which she expresses as an inherited condition, as her father had the same. “When your lids come down like that, it’s almost as if you can’t see,” she explains. She decided to have that corrected and have a mini face-lift at the same time. “This was not due to vanity,” she affirms. “I worked in an occupation which involved a lot of public contact and I had such huge bags under my eyes, people would always tell me I looked tired. I had also begun to notice that my facial skin felt loose, which I could sense when I was walking.”

Unfamiliar with any medical professionals in the field of plastic surgery, she researched online to find a doctor in Hagerstown and opted to contact Plastic Surgery Services, headed by Dr. Henry F. Garazo, a board-certified plastic surgeon with a state-of-the art surgical suite in his office. He has been called one of America’s top plastic surgeons by the Consumer Research Council of America, and has also earned honors as one of the outstanding plastic surgeons in Maryland.

Pam, who is 55, had her surgery done earlier this year, and although there was some initial scarring around the ears and eyelids, it has been diminishing since. She was especially amazed at the work done on her eyes. “The black stitching over my eyelids was so fine, the stitches were perfectly straight and tiny. My husband agreed with me that the work was so good no one would notice I had anything done.” The eyelid surgery was especially rewarding, Pam says. “I can see better now — it has opened up my range of vision.”

Plastic surgery, which includes both cosmetic and reconstructive surgery, has seen many changes over the past few years with the introduction of both new procedures and new products which are less invasive and offer a shorter recovery time. The large array of new techniques coming onto the market can make it confusing for the patient, which necessitates consulting with a specialist all the more important. Dr. Garazo does note that a lot of the new options can produce dramatic improvements.

No longer does this type of surgery conjure up images of a frozen expression on someone’s face, tightening around the hairline, a pulled back, shiny texture to the skin, or the deer-in-the-headlights look that was often said to characterize earlier such surgeries. In some ways, it has now attained the hallmark of what the ancient Greeks meant by plastic: re-sculpting — better indicating the artistry involved.

Contrary to common perception, plastic surgery does not only apply to the face; in fact, it can be divided into two major, sometimes overlapping, areas: cosmetic and reconstructive. Dr. Salvatore DiMercurio, a 30-year practitioner of plastic surgery and board-certified physician with the Cosmetic Plastic Surgery Center in Hagerstown and Chambersburg, Pa., has had a varied career. Over the years, his work has been directed to repairing cleft palates on children, reattaching fingers and ears, and has also worked with a man who had a vascular tumor growth inside one eye due to a birth defect. That last procedure was an especially significant and rigorous one, as the patient’s deformation was so obvious and his appearance so frightful that when at a mall, people would grab their children to get them away from him. It took three operations to improve both his appearance and his eyesight.

A graduate of Mount Sinai School of Medicine and the University of Virginia, Dr. DiMercurio originally specialized in general surgery, where he even did gender transformation operations during his training at the latter institution. But he was attracted to plastic surgery as “it not only made people look better, but it also helped them medically and psychologically.” He has hospital privileges at Meritus where he has served as Chief of Staff and on the Board of Directors. He has also been president and co-president of the Maryland Society of Plastic Surgeons, and has hospital privileges at Summit Health in Chambersburg.

Over time, he has seen a new appreciation for the evolving methods of plastic surgery from both the medical profession and the general public. As he notes, “Today, there is a lot of equipment which helps to tighten and rejuvenate the skin.” And new adaptations of existing methods are always on the horizon. For instance, a patient who was suffering from severe migraines was given Botox injections, which aided in reducing the pain, Dr. DiMercurio shares.

Rejecting another misconception about these procedures, people aren’t wrapped up in bandages like a mummy any longer. “I used to do a lot of major face lifts,” says Dr. DiMercurio, “but today you can do a procedure such as a mini face-lift on a Wednesday and the patient can go out to dinner on Saturday.” He recalls one dramatic face-lift he performed on a 90-year-old woman, who he says now looks like a stunning 60-year-old. Weight loss has also taken on a new meaning with advancements in fat reduction procedures, such as CoolSculpting, which Dr. DiMercurio offers. This eliminates fat cells using a non-surgical technology. There is no freezer burn to the skin and the results are long-lasting.

Dorene Haug, 59, became one of Dr. DiMercurio’s patients after both an ultrasound and an MRI revealed that she had cancer in both breasts. “Initially, I was in shock,” she says, and it hit her especially hard as she was also facing several other personal challenges — her father had recently died and she was moving into a new home. Her surgery was on May 28, 2014, a date she will not soon forget. “I was in surgery for most of the day,” she recalls, “and everything went very well. After the removal, an implant was placed in the left breast and an expander in the right,” she recounts. “When I awoke, the doctor was in the room doing paperwork and I was comforted by seeing his friendly and confident face.”

Her implants are checked periodically, and when a depression was found in her chest, a graft was made using her own belly tissue. The Food and Drug Administration has cleared this relatively new technique, which can be used for many areas of the body. After three years, she has grown into the changes in her body, and even jokes, “With the implants I don’t have to worry about sagging breasts as I get older. I even have cleavage and look like everybody else.”

And because she had health insurance which covered the reconstruction, Dorene only had to handle the co-pays. Health insur-ance will normally cover reconstructive services, but not usually cosmetic services, meaning patients had to pay for out-of-pocket — which serves as a reminder to always consult with your health insurer before you do any work of this kind.

To improve the skin, a practitioner can go deeper below the surface with the use of a hydro-facial serum which rejuvenates and replaces moisture, or try micro-needling, one of the newest techniques, which uses a small instrument to stimulate the skin to produce collagen and elastin, reducing fine lines and wrinkles. In another fairly new procedure, PRP (platelet-rich plasma) uses your own blood, which can be injected into the skin to stimulate growth factors and improve problem areas, such as acne scars. It can also be used for hair restoration, which Dr. Garazo is interested in trying on individuals who have experienced lost hair due to chemotherapy.

And then there is Kybella, which is used to reduce a double chin with a synthesized natural enzyme to melt fat. “It works great, and has FDA approval,” says Dr. Garazo.

For those looking for a “touch-up,” minus the surgery, the skills of Johanna Fangmeyer, who has a master’s degree in nursing from the University of Maryland and is a board-certified dermatology nurse practitioner, provides an alternative at Hagerstown Dermatology and Skin Care. “I have always liked skin and also liked medicine,” she comments. After working with Dr. DiMercurio as a nurse practitioner, she decided to go out on her own. “There is a huge need in this area for this kind of practice,” she acknowledges.

Her patients are both men and women, with a special emphasis on farmers and sunbathers who have experienced sun damage or skin cancer.  “I’ve seen a lot of basal cell cancer and pre-cancerous conditions where the skin is scaly, red, and tender. It is often on the nose or ears, but it can be on any part of the face.” In her clinical service practice, she focuses on skin diseases, skin exams, removal of skin tags, warts and moles, preventive measures and treatment for skin cancer, and pediatric dermatology. She uses Botox and other dermal fillers to restore the natural volume of the skin, provides eyelash lifts (a curl technique to which a tint can also be added), laser treatments, photo facials, and sclerotherapy for spider and varicose veins.

The latter involves using an injectable medication that shrinks the veins. It may take a few treatments, but it closes up the veins by about 80 percent, says Johanna. And for those who are more hirsute than they would prefer, she also uses a laser process for hair removal, and notes that any dark, coarse hair is ideal for this. This is a permanent process that takes about 4–6 sessions. Fine lines, large pores, or acne scars can also be removed by fractional resurfacing — a cutting-edge technology that involves the laser penetrating the dermis of the skin, stimulating a healing process, which has proven to be very effective.

“There are always new methods and procedures,” says Johanna. Resear-chers are now working on finding a way to replace lost collagen in the skin that comes with aging, and replacing it with fillers or another form of skin stimulation, she adds. The aesthetician at Hagerstown Dermatology also works with various cosmetic products, especially Jane Iredale’s mineral makeup to provide makeovers.

Each of us has an idealized vision in his or her head (and yes, men are also interested in many of these procedures) of what they want to improve or change. This “brave new world” of plastic surgery has so exploded over the past years to the point that just about every area of the body can be worked on. It would behoove one to think seriously about what kind of modifications he or she wants, though. The best advice is to take your time and think through what you really wish to change, do your homework, and examine the options. Ask as many questions as you want of the appropriate medical practitioners, and as both Dr. Garazo and Dr. DiMercurio point out, make sure he or she is board-certified by the appropriate association before making a final decision.