Enhancing Homes, One Customer At A Time 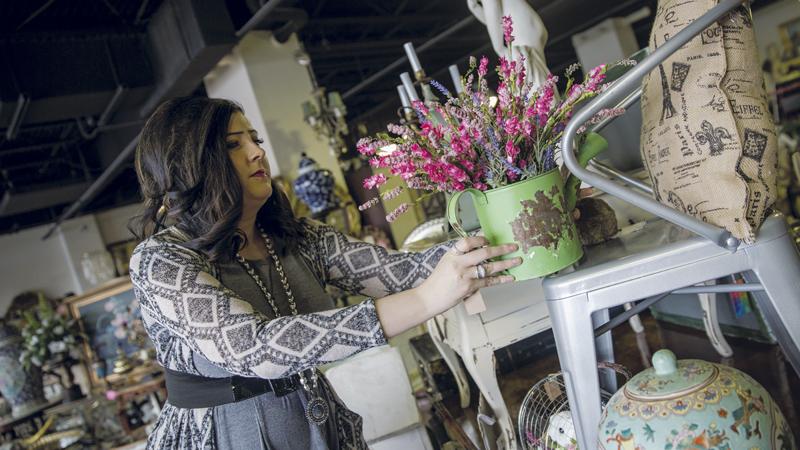 Mansion Chic features a sundry of throwbacks and accents sure to tie any room together.

There is something very distinctively special about antique shops. The reasons are relative to everyone, but there is certain to be an agreement on one word that defines them: escape. Surrounded often by stores selling modern items, antique shops offer a door to the past — a period of separation from hustle and bustle — as well as a chance for many to “own a memory” while beautifying their homes or purchasing that special something that maybe was closer to their hearts than realized.

Ashley Little says she has always heeded the call of antiquing, and her response to that call manifested itself in August 2015 in the form of Mansion Chic, an upscale vintage and antique boutique. On Black Friday 2016 she, and her husband of nearly four years, Chris, moved the shop to a larger, 5,000-square-foot location at 11205 John F. Kennedy Dr. in Hagerstown that opens its doors weekly Thursday–Saturday. 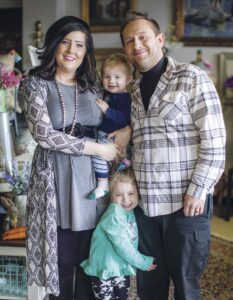 How best to describe one of the area’s most unique destinations for home décor? “I call it ‘The one-stop-shop for your home,’” says Ashley. Whether stopping by in person, or casually checking out the shop’s inventory from the comfort of your couch via Mansion Chic’s Facebook page, there is no shortage of beautiful vintage furniture and garden decorations to back up Ashley’s claim. In addition to larger pieces, the shop boasts a range of jewelry, knick knacks, and scores of other nifty items, like a bird in a cage with a pair of eggs — which I personally found particularly cute, and learned that they were crafted by Ashley and her daughter.

Above and beyond the wide range of items for sale, this is a family place. Ashley and Chris have two children: 3-year-old Brooklyn Jet (“she prefers to go by ‘Jet,’” says Ashley; “she’s all personality”) and son Bronx, who is 9 months old. Both children are often on site with Ashley at the shop, and Chris is often there to aid her as well. Ashley has also started a Christian jewelry business for Jet called Jewels and Faith, which is sold at the shop.

Mansion Chic started out as a hobby for Ashley, who was a stay-at-home Mom. She began by renting space in someone else’s store until finding her own spot — and the business only grew from there. Her interest was fostered when she was young by her grandparents who owned an upholstery company, called Keller’s Upholstery. “I always went to my grandparents’ house, and they had these beautiful pieces of furniture and antiques…It’s just very close to my heart.” So close, that Ashley admits to occasionally shedding tears when pieces are brought into the shop that remind her of her grandparents. “It does, I really wish that they could see it. I know they are looking down on me; they probably are. But I always wish they were here to see it.”

As a temporary home to antiques and refurbished pieces — often for a short period of time — Mansion Chic is akin to foster care for unique home décor. “There’s always something for everyone,” Ashley says. She also works with vendors who bring pieces in, and she also deals with imported pieces from overseas. “We have new pieces, old pieces, and I think we really have a very good eclectic mix,” she adds. “I work with one gentleman who imports stuff from all over the world; we get such beautiful sculptures in, these bronze sculptures, and they’re from every period you can think of. We have Roman soldiers, cowboys, and they’re just beautiful, and they are all so unique.” Many of the items that Mansion Chic sells are garnered from estate sales. And the outdoors is not ignored at Mansion Chic. “We even have stuff for your garden outside like garden sculptures, planters, and birdhouses,” she notes. 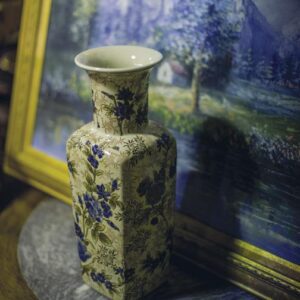 While many shoppers visit Mansion Chic for pieces to match something in their home, many also visit while on the hunt for that special item they just didn’t know they needed yet, that will perfectly fill some void in their home. There is no shortage of beautiful, breathtaking, and often very rare items on display. Ashley says the most unusual item she has sold was a 7-foot-tall solid mahogany carved knight’s chair with a tufted leather seat and backing that was purchased by a wedding venue that was featured in Martha Stewart Weddings magazine. When asked if there is any current in-stock item garnering particular attention, Ashley points out a Middle Eastern 10-foot-long buffet server piece that is accentuated with 24-carat gold detail. Ashley notes that she sometimes receives and displays items that can occasionally linger a bit longer than others and require, in her words, “just the right buyer.” And to keep the store fresh, she rearranges the store every two weeks, so all in-stock treasures look new for her customers.

In addition to her work at the shop, Ashley also does in-home consultations for styling and decorating that can include paint color selections, customized furniture pieces, complete transformation of the home, and much more.

Ashley also takes pride in using the shop for community involvement, and making monetary and product donations —including furniture and Mansion Chic gift cards — to many wonderful local charities and programs like churches, fundraisers like Community Clinic Silent Auction, Toys for Tots, and Girls Inc.,  among others. “I love our community. I want them to know we’re here for them. We like to be social with everybody, and like to help out any way we can.”

Decorate By Accident Or Design

Mansion Chic
11205 John F. Kennedy Dr., Hagerstown
301.988.2233
www.facebook.com/VintageUniqueBoutique
Hours:
Thurs.–Sat.: 10 a.m.–7 p.m.
Sun.: 1–5 p.m.
And if you just don’t have time to make it to Mansion Chic, inspiration and tips are offered online via Ashley’s blog, which can be found at www.chicyourhome.theblogpress.com.