A Dose of Satire 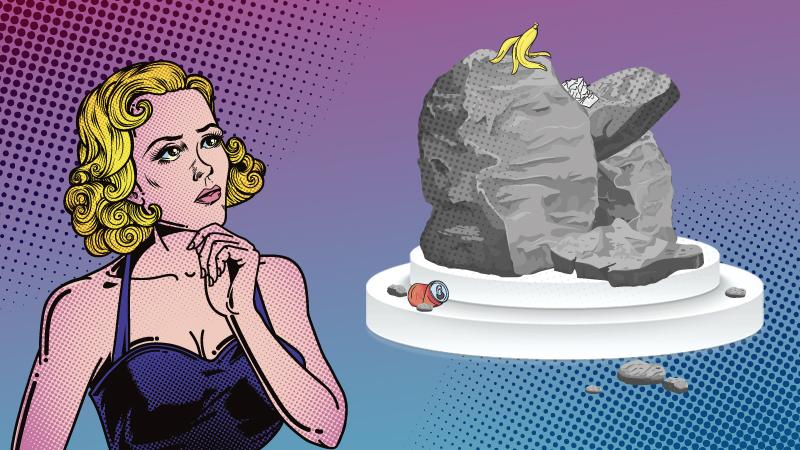 An inauthentic look back at Hagerstown’s phony past

Tourists from across the United States recently visited Hagerstown’s new culture trail en mass to view artwork that had gone viral on social media. Even Hagerstown’s City Council had become completely baffled as to where the artwork had come from, or who donated it.

The artwork — a modern piece — featured concrete and stone, in an erratic display of chaos mixed with beauty. “Intimidating, yet serene” is how a national art critique site described this unnamed work. But who created this viral masterpiece, and where did it come from?

Among the concrete was a torn corner of a piece of paper with a name and a number “Lee, 88.” But who was this “Lee” artist, and why had his work, which was believed to have been created in 1988, been completely unknown until now? Social media was completely abuzz with rumors and theories, while the art world tried to figure out where this artwork had come from. The leading theory among the art community is that Lee was most likely from a family of immigrants from China, possibly once residing in Washington, D.C.’s Chinatown community, and most likely a first-generation American in his family.

Even curators from the Smithsonian visited Hagerstown to view this artwork, proclaiming how marvelous the piece truly was, and the statement it made about today’s society and culture. “The arrangement, the jagged edges, the flow and disruption, this truly is a masterpiece!” stated one curator.

Local Hagerstown residents were not all as impressed. Many expressed frustration and concern, wanting to know how much this artwork will cost the city in the long run. “It looks like a pile of rocks to me” was the response provided by a local resident when asked their opinion of the piece. “It doesn’t look like art to me, all it does is make the area look rundown.”

Social media was quick to criticize those residents who dislike the artwork, claiming they have no appreciation or understanding of modern art, and they need some culture in their lives. Many heated arguments ensued on social media, with modern art fans claiming that Hagerstown does not deserve such an appealing piece of art, as the residents just don’t appreciate its beauty.

After approximately four days of Hagerstown’s newest artwork going viral on the internet, onlookers were puzzled as a dump truck from a local construction company backed up to the site. Several posts were made on social media, speculating that the city had sold the artwork to another city more deserving and appreciative of the art. As the construction crew loaded the artwork into the dump truck, onlookers gasped in horror as two workers threw one of the larger pieces into the truck and the piece broke in two.

“What are you doing, you’re breaking it!” exclaimed one of the tourists who had traveled from D.C. to view the art.

Puzzled, the crew foreman approached the group. “Listen, I’m not sure what you’re all doing here, but here’s the work order for us to replace the sidewalk at 88 Lee Street. We’re just cleaning up the leftover debris.”

No modern art critics had heart attacks while writing this article. This is a satire article by Ken Buckler