Rolling With the Punches 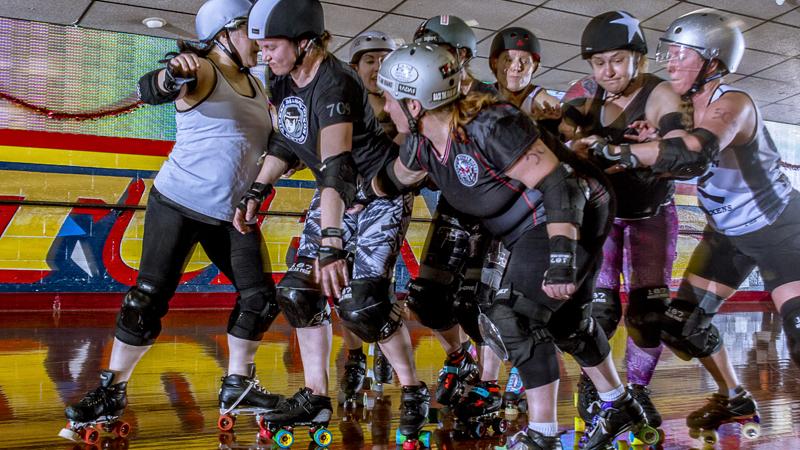 The alter egos of the Mason-Dixon Roller Vixens brandish their talents and solidarity one revolution at a time.

Crouched shoulder to shoulder in warrior stance, the hearts of four women beat with a single intention as they form a rolling barricade. Behind them, a fifth shares their collective soul, darting and weaving ahead through enemy lines. Working as one, the five summon their power, decoding strategy on the fly. Instinct locks in, and muscles rely on memory. The clock ticks. The crowd cheers. It’s roller derby night and there’s fresh meat on the battlefield.

Welcome to the Mason-Dixon Roller Vixens and the world of women’s flat track derby. Outsiders know that better as women’s roller derby — and if you’re on the inside, just “derby” is sufficient.
A view behind the scenes might overhaul your understanding of women on roller skates. 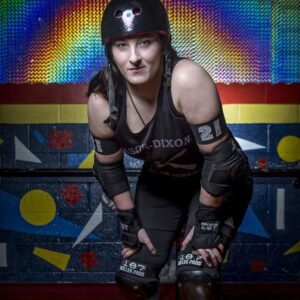 Derby events are known as bouts, a reminder to all that the action could be like a one-two punch and last only a few seconds. Teams skate two 30-minute periods with a 15-minute halftime but
the segment of play — known as a jam — lasts no more than two minutes.

Reducing a sanctioned sport with unlimited opportunities for errors to the basic objective means there are two teams of five members on the rink together, all skating in the same direction. Four teammates serve as blockers to prevent the opposing team’s jammer from breaking through the lines and passing other skaters. Points accrue as their own jammer makes successful passes around opponents and the body count accumulates.

“Derby isn’t what you see on TV,” says Lucretia McEvil, a.k.a. Jeni Heimbuch, mental health professional, and charter member of the Vixens. “It’s not for the weak of mind or body. People see it as campy, a cult classic. They get caught up in the look of the outfits, the fishnets, and the makeup, but it’s much more professional. The shows cover up the strong core of women behind it.”

League president, Sounds Like Magic, agrees. In her day job, Devan Zeger is marketing director for a winery, but at the rink, she is known simply as Magic, Vixens teammate, and fresh meat (new players) coach. She clarifies the distinction about authentic Vixens derby. “Derby isn’t what was portrayed back in the day. It’s a mainstream sport now, very demanding, and it’s a business. Unless you’ve played lacrosse, most women have never had the chance to be part of a contact sport. Women who come here to be successful have to want to play roller derby, not be a roller derby girl.”

The regimen is intense. The Vixens practice three nights a week, two hours each night, and skaters must have 66 percent attendance. Half of the players appear without skating experience. New derby players, called freshies, face five months of intensive training before being unleashed against opposing teams. Cardio drills build stamina and workouts force skaters to develop muscle control to execute skills — like the plow stop — that rely on inner-thigh strength to stop forward momentum in only three seconds. “You use all the muscles you never knew you had unless you’re doing something weird like this,” Magic jokes.

Current Vixens range from age 21 to 50. “Women come in with no idea what a toll it will take on the body,” says coach Scruff, Meg Sherwood. “Some come in with no background in sports whatsoever. They have no idea how the body works. Maybe they are just learning how to skate. You have to dig deep, and that’s mental. This sport teaches you how to be humble.” 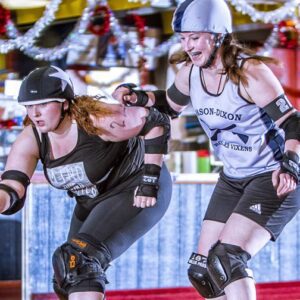 Wheels are the great equalizer in a sport where power can offset agility and cunning trumps speed. “There is a place for every size girl in derby,” says Magic. “Everyone is welcome here.”
McEvil, age 31, admits she had been self-conscious about her size for years. “Here, I’m praised for my size and my strength,” she notes. “When I came to derby, I realized I could knock people down and other people would be happy about that and I thought: ‘Ha! This is for me!’”

Skating alongside McEvil is Liz Dexic, Sydney Harbaugh to her clients at the piercing studio locally and in D.C. At 4 feet 11 inches, she’s a fierce but diminutive presence. “If she was two inches shorter, she’d have to ride in a car seat based on Pennsylvania law,” quips McEvil.

Liz has been in derby off and on for the past 10 years. “You have to figure out what you’re good at then how to bring it here,” she notes. Her daughter, 13, has grown up at the rink and is part of junior derby, a mixed league for boys and girls also coached by Scruff. That’s serious love of the sport from Scruff who juggles coaching two teams with her daytime career as a meeting and events coordinator in the travel industry.

The Mason-Dixon Roller Vixens league is one of 397 operating under the Women’s Flat Track Derby Association (WFTDA), a nonprofit organization founded in 2004. WFTDA now operates in 20-plus countries and serves about 20 leagues in the Maryland, Pennsylvania, Virginia and Washington, D.C., region. Functioning as roller derby’s NFL, the organization provides structure, rules, rankings, insurance, and support to all leagues worldwide. Their presence has advanced derby as a sport, and reduced injury to players due to the increased focus on safety.

A skater’s battle rattle includes her helmet, mouth guard, and pads on knees and elbows. Tailbone injuries are the most common, especially among freshies. Coaches hammer the need to maintain a derby stance — the signature bent-forward posture that minimizes injury. But falls are inevitable, and coaches protect their players by drilling them with practice on how to make peace with the floor: hit with forearms down and extended, not on elbows or wrists. 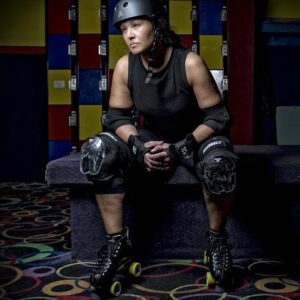 Shambles and Skull Counselor are two new Vixens who made their debut at Battle of the Freshies this past February. Shambles is a physical therapist in her other life as DeeAnn Chamblee, and she remembers that the action was so fast when it was real she couldn’t really put all she knew into play. She broke her finger at her first bout, but as a mother of two daughters in college and a teenage son, she smiles and says: “My son’s friends think I’m badass.”

Skull Counselor describes her first bout as surreal. “It was like an out-of-body experience. I remember thinking, ‘I’m actually doing this,’” she reflects. “I’m one of the oldest skaters here and I hate to exercise. I found a hobby I like and I wanted to prove I could do it.” Fans stood by her on bout night with posters in hand. Some cheering her on know her as Dawn Irwin, middle school guidance counselor.

One after another, teammates all commented on the amazing Vixens women and the camaraderie among them. They have also grabbed hold of the empowerment that comes from derby — a gift they want for their kids as well. On the flip side, derby is an opportunity to get away from the demands of family and jobs to carve out something for themselves. “This counts as self-care and personal time,” says Liz.

“Women come here looking for something more,” says Magic. “It’s a workout and a chance to connect with other great women. It’s something to look forward to after their 40-hour week. They come in for practice and tell us they’ve had the worst day ever and they didn’t want to come. When they get here, they’re glad they did. A skater told me once: ‘Derby saved my life.’”

“It’s all about self-love and seeing what your body can do,” McEvil adds. “Many women come here to find themselves. Sometimes they discover they are more than they thought they were.”

Where Skates And Heads Will Roll

The Vixens have bouts year-round with two short breaks in December and again in July. Catch them on their home turf at Turner’s Skate Palace, located at 17333 Virginia Ave., in Hagerstown for upcoming bouts on May 21 and June 4. You can also follow them on Facebook by searching for Mason-Dixon Roller Vixens or email them for details at mdrvinc@gmail.com. Spectators, sponsors, volunteers and fresh meat are always welcome.