A Legacy of Pain 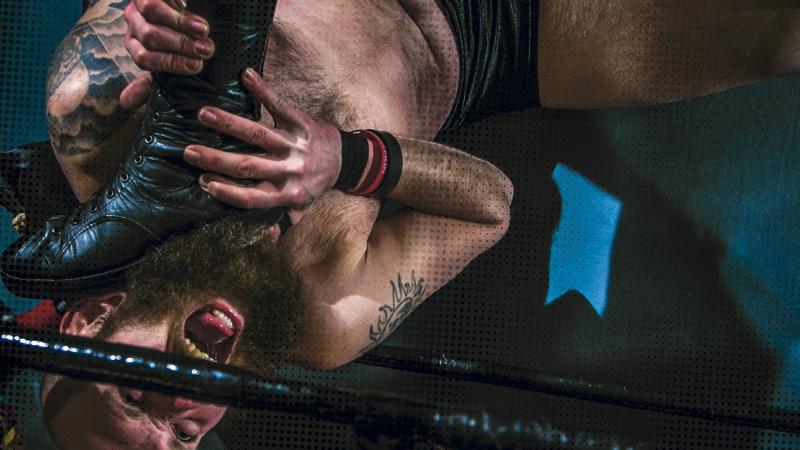 John Rambo teaches and trains the art of wrestling to the next generation of hopefuls.

John Kreczman Jr. — known much better by his wrestling moniker of John Rambo — is fiddling with a kerosene space heater that’s refusing to light, while a few wrestlers warm their hands over another. It’s borderline frigid inside the National Wrestling League/House of Pain Wrestling Federation training center in Hagerstown. It’s easy to spot John — though the flowing mane of hair that helped him earn his nickname has gone gray, it still mirrors the look Sylvester Stallone had as the action hero of the same name. 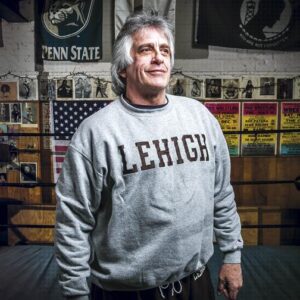 John has been teaching at the National Wrestling League’s House of Pain Wrestling Federation since it opened in 1997 and has seen hundreds of wrestlers come through the door, either for training or the weekly shows he puts on — he pegs it at about 5,000 wrestling events since the organization was founded.
“It’s something you do for love, for passion,” John says. “Schools will pop up and you’re lucky if they last a year or two — again, there’s no money to be made in it. Here, we have a league, and that’s what the successful shows do — they have a league, because they have the talent.”
Additionally, the organization has had an open-door training policy for those with ring experience in the past, which brought in names like WWE Raw Tag Team Champion Luke Gallows, who’s wrestled all over the world. Luke, who is from Cumberland originally, trained in West Virginia, and visited the school for additional ring time in his early days, John says.

One of those big names brought in for a particular show was legendary wrestler Jerry “The King” Lawler. He wrestled in a match against Chad Smith, who went by the name Flex Fenom in the ring until retiring a few years ago after neck surgery. Chad says wrestling “The King” was one of the highlights of his career. “I had to make it great,” he says. “Lawler was so easy to work with — I was put at ease talking to him, he was really cool. We just went in and tore the house down. I got a standing ovation when I went backstage. I got a lot of confidence that day.”

Chad wrestled for about 10 years with the organization before branching out to other independent promoters. He says that it’s easy to learn how to perform a suplex or a body slam, but that the little things that make a wrestler great — like facial expressions to help connect with the audience — take years to master. “You can learn how to wrestle a match in a week’s time,” Chad says. “But it takes a long time to learn the soft skills: how to make things make sense, how to engage the audience. The cool thing about having a school is you get to go train as often as you want to — a lot of times guys don’t get ring time unless it’s a show night.”

No matter how big of a star is involved in the match, nothing works if the training isn’t right. Contrary to popular belief, wrestlers rarely plan matches move by move, instead hoping to feed off the crowd. John explains that there’s a basic formula for a wrestling match. The good guy — or baby face, in wrestling lingo — gets a brief period to shine before the bad guy — or heel — takes over. When this happens, it allows the crowd to rally behind the baby face, urging him or her on toward a comeback, where they take over and ultimately win. 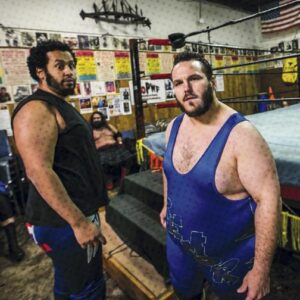 “If you follow that recipe to a match, you can do it with anybody,” John says. “It’s more improvisation than it is choreography. And that’s what separates the guys that want to make it from the guys who do make it — it’s got to look real at the same time.”

John says he stresses realism above all else with his trainees, which can be quite a feat, given that the crowd knows they’re watching a staged performance. “It’s tough, what we do,” John says. “You bang into each other, but you just don’t kill your opponent. You’re trained how to hit somebody with force and not hurt them. You’re trained how to take that shot, and react, what we call the ‘sell.’ …But it’s a whole form of acting you have to throw in with the athletics. It’s an artwork.”

Two of John’s trainees are excited to talk about the art of wrestling. Albert Huntzberry, a.k.a “Tremor,” is Hagerstown born and raised — he even attended NWL/HoPWF shows as a kid. He’s been training and wrestling at the school since 2005. He’s currently in a tag team with Ismael Fermin, a.k.a. “Ishman Martinez,” who perform as a dastardly duo of unruly heels.

Ishman relishes the opportunity to play the bad guy. He gets to disrespect crowds and tries to get them upset by any means necessary, whether in the ring or out of it. “You’re a bad guy, but you can be funny. You can make the crowd laugh, even though you’re the bad guy and they’re booing you,” he says. “We just had a guy get out of his seat and try and come after us. That’s awesome! To tap into a person like that. This guy hates me so much he got up out of his seat. That’s power! That’s what you work so hard for.”

Tremor worked at the Hagerstown Outlets for about as long as he’s been training, and says he sometimes runs into people who recognize him as his in-ring character, which can be trouble when you’re known as a bad guy. He recounts a story where a customer was attempting to figure out why she recognized him, before it finally dawned on her. “She said ‘I’ve been to NWL shows…you’ve always yelled at me!’” he recalls, laughing.

House of Pain Wrestling celebrated its 20th anniversary on April 1, and John says he wants to take things to the next level. There are big plans for the school and the league. John says he’s working on setting up regular recordings of their shows that will be put online. Once that’s in place, he wants to try to get on television locally, with sponsorships from local businesses to help buy airtime. 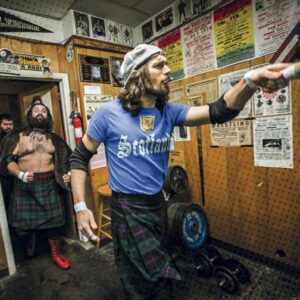 Chad Smith says John’s somewhat tough exterior hides how much he cares about the school that he’s spent 20 years building. “John can be a gruff guy at times, but if you understand him, you know that he really cares,” Chad shares. “He might not be the best at showing how much he cares, but if you spend about five minutes outside the wrestling world and get to know the guy, you kind of learn to look past the exterior and learn to appreciate what he’s really trying to do.”

Chad eventually left the area to wrestle in other independent companies, but says the reputation built by John and other students at the school preceded him wherever he went. Promoters and other wrestlers would know him by reputation alone.

“What he was trying to do was to build a group of wrestlers who can walk into any organization and immediately command respect, and that was what he did,” Chad says. “He’s created a legacy of greatness. It’s a culture he instilled in us that carries forward today. It’s the culture he created — it’s a legacy now.”

In conjunction with NWL/HoP’s 20th anniversary on April 1, a special celebration at the Where House in Martinsburg, W.Va., was held featuring nine matches and an honorary plaque dedication to the family of Dennis McMillen, who was a long-time friend and fan of the league.