The Secret To Breaking A Satisfying Sweat 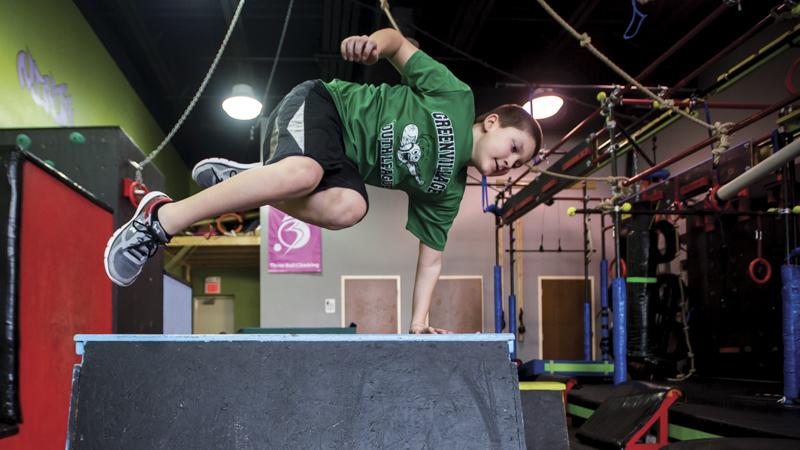 The TV program “American Ninja Warrior” has a worldwide following, but long before its creation, two best friends and fellow seventh-graders at Smithsburg Middle School were building obstacles in their backyards and pushing each other to complete them. By the time the show debuted on television in 2009, Brian Cooper and Josh Ramsburg had already spent hours jumping, climbing, and testing their skills to the extreme.

“I told Josh about the show and we started building more obstacles in his mom’s backyard,” Brian says. “We were pouring so much money into it every summer that eventually we said we should make a business out of it.”

The pair started visiting other Ninja Warrior-style training gyms in other states as the popularity of the show grew and more gyms opened. At the same time, Brian was taking business classes at Hagerstown Community College. “I kept telling Josh, ‘I think we could really do this,’” he says. 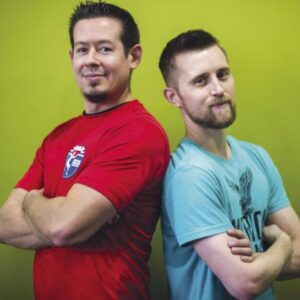 While the two developed their business plan, they both also worked regular day jobs — Brian as an art teacher at Northern Middle School and Josh as a resource coordinator at Way Station, Inc. in Frederick — and continued their own obstacle training. In fact, while they were scouting locations for their business and working out the details, Josh tried out for “American Ninja Warrior” three times and was hired to be a course tester.

After considering multiple locations and names, they opened their own training facility last March. Located in the Fountain Head Plaza in Hagerstown, they named it 4 Star Obstacles. “We met with the owner of 4 Star Athletic Complex in Williamsport and she gave us a lot of great business advice,” says Brian. “Originally we were going to be co-located there, hence the name 4 Star.”

After the pair settled on the Hagerstown location instead, they decided to keep the name because they felt it was fitting for their business. They say the star represents the ninja star and the four represents the four components they try to teach their clients: balance, agility, strength, and overcoming obstacles.

Both Josh and Brian are certified parkour instructors, which is the training discipline of getting from one point to another in a complex environment, without assistive equipment — and in the fastest and most efficient way possible. The two have built obstacles modeled after the television show (like a 14-foot-high warped wall and a salmon ladder) and dozens of others, like ropes and tires to climb and swing from, climbing walls, and balance beams. They use their training in parkour and obstacles to help kids and adults from age 5 and up hone their ninja training, whether for the show or simply to have a good time or learn some new skills while working up a sweat. “The training is good for so many things like balance, grip strength, and coordination,” says Brian.

The gym is open Mondays through Saturdays with a variety of class offerings — the most popular being the classes for 8-to-12-year-olds — and on Sundays, the duo hosts birthday parties.  “We’re both parents. That plus being a middle school teacher has taught me patience, above all else,” Brian says of their young clients. “And because we approach this as parents, we are really focused on safety.” They use professional safety mats and take various other precautions to ensure that even their smallest clients are being considered. 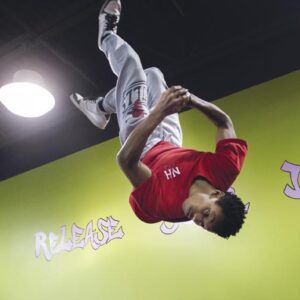 They’ve also accounted for the attention spans of their younger customers by individualizing training to varying ability levels and changing things up regularly. “We are constantly evolving so the kids never get bored. The show evolves, too, so no two classes of ours will ever be the same,” says Josh. “It keeps you motivated.”

The motivation hasn’t waned for Josh either — he recently submitted his audition video for the upcoming season of “American Ninja Warrior” and is waiting to find out if he’ll get a call-back. They also have a customer who has submitted an audition video and the pair plan to cheer her on if she makes it on the show.

“One thing that is great about Ninja Warrior is the camaraderie,” says Brian. “You can reach out to other gyms or other contestants and just cheer each other on.” They extend that community mentality to their customers by helping each person push themself based on their goals and teaching their students to root each other on. As a result, their client base has grown to include kids and their parents, and in one instance, three generations taking the classes together.

“No two ninjas are going to be the same,” Brian says. “But what is the same is that they don’t even realize they are working out when they are here. They are just having fun.”