From Gridiron To Ironman 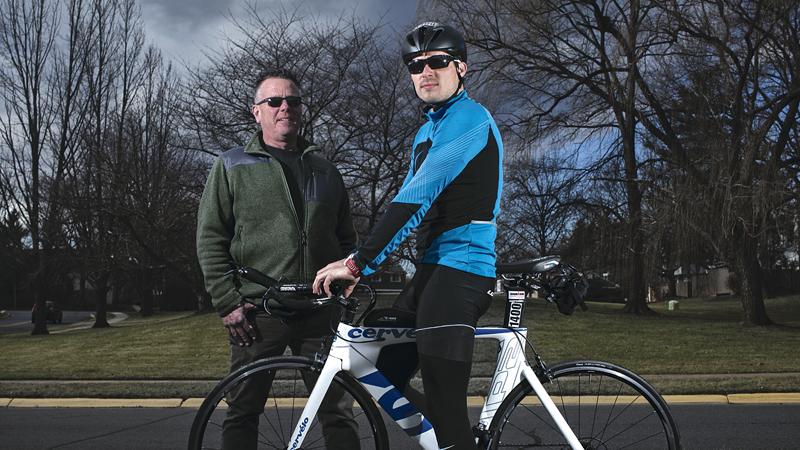 After hanging up his North Hagerstown High football cleats, Logan Kelso took on one of the most difficult single-day challenges out there.

Saturday mornings are usually a time to be lazy. No alarm clocks, sleeping in, and maybe grabbing a cup of coffee to enjoy while relaxing in a comfy chair and scrolling through the day’s news headlines. But before most local residents have wiped the rheum from the corners of their eyes, Hagerstown native Logan Kelso has already been on his bike for several hours. 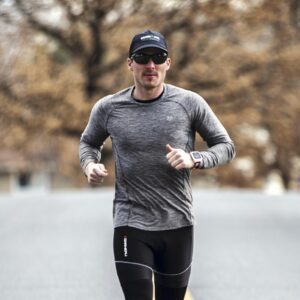 Waking at the crack of dawn to beat the heat during the summer months, Logan completes a six-hour ride on his bike, stops to eat and drink, then changes into running clothes to knock out a seven- or eight-mile run. Just reading that sentence may make some tired, but Logan’s gruelling workout schedule, which varied daily over a 10-month period, was all part of his desire to become an IRONMAN — a title bestowed upon those who complete a 2.4-mile swim, a 112-mile bike ride, and a 26.2-mile run all in the same day. “The easy part is actually the race,” he says. “The hard part is the 10 months leading up to it. If you can get to the starting line not injured, not sick, and mentally prepared, the race is the easy part because as long as you did all you needed to do leading up to it, then there is no doubt that you can finish it.”

Beginning soccer at the age of 4, Logan has been involved with sports for most of his life, including being quarterback for North Hagerstown High School’s football team. When he graduated, he began to explore new sports worth trying. “I figured I was beating myself up lifting weights and playing a contact sport like that, so I looked into getting more cardio,” he says. Running became a passion, and while attending Penn State Harrisburg he decided to take a swimming class because he was contemplating doing triathlons in the future. “It was probably one of the greatest classes I took in college just because it gave me the foundation and the basic swimming form,” he says.

Three summers ago, a friend from work told him he was going to enter the Hagerstown Sprint Triathlon. He felt he was close physically to being ready to complete a race of that magnitude, but he didn’t have a bike at the time. He decided to buy one and register. “I tried to learn how to ride a bike again and I put it all together,” Logan says nonchalantly.

After completing the 2015 race, he felt he did well enough, and decided after much contemplation in January 2016 to go for the pinnacle of the triathlon races, IRONMAN, as a way to better himself and set an achievable goal through hard work, determination and sacrifice. “It is such a commitment, not only for myself, but anyone that I surround myself with and anyone that is in my life,” he says.

His fiancé Kristina Mayne recalls saying, “‘I’ll support you in anything you do. That’s great. What is it?’ It was new to me. I had no idea. He told me what it was and I was like ‘That all happens in one day? That’s a lot. That’s basically biking from where we live (in Germantown) to New Jersey!’ But I said, ‘Whatever you want, I’ll support you in anything you want to do.’ It’s an incredible feat.”

There are different types of training for athletes to work on, including building muscle, working on speed, or reducing workouts to rest the body. Lower volume days would be shorter, but more intense exercise. “The scary part leading up to the IRONMAN is you would never complete the sole distance in training. You would come very close but there was always that question in your head, ‘What is my body going to do on this longer workout?’ It was an unknown zone. With enough training and preparation, I think everything was fine,” Logan says.

Working as a civil engineer at a land development company in Montgomery County, he would work out right after work. Kristina would have dinner ready for him around 8 or 9 p.m. Revamping their diets, she focused dinners around proteins, vegetables, and starches, such as salmon, kale, and collard greens. “They were really simple meals,” she says. “You can be the best athlete and the most athletic individual out there, but if you don’t have the nutrition to support you, then you are going to fail.”

Were there days when he didn’t feel like going to the pool or running in heat and humidity? Of course, he concedes; yet, “I’ve always had a good work ethic and I’ve always worked out whether it was for triathlons or not. …Through the whole process, I had such fun and a good time. I always try to spread the word, if anyone has a goal in mind, then absolutely try to go and achieve it. Anything is possible if you put in the time, commitment and sacrifice.” 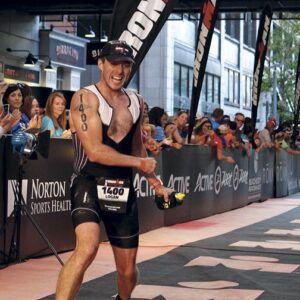 In order to prepare for the October 2016 IRONMAN in Louisville, Ky., Logan did two half IRONMAN events — one in Raleigh, N.C., and another in New Hampshire. Travel for the events is an added bonus to competing. “It’s (places) that I would not typically see in my every-day life,” he says. Louisville was not at the top of his bucket list, but he ended up falling in love with the city and got to see some of their famed racetracks.

On the day of the race, many family members, including Logan’s parents and Kristina, made the trip to the Bluegrass state for the event. “I’ve always been there to cheer him on ever since he was 4 years old,” says Logan’s father, Joe.

The Hagerstown resident recalls walking to a portion of the biking course where there were no spectators. While tracking Logan’s time, he realized his son was keeping pace with professionals who compete regularly. “The look he gave me as he went by was one of ‘Look what I am doing!’” he says. “I’ll never forget it. …He was working. He was working hard and he was right with the big boys.”

Kristina recalls getting a notification on her phone that Logan had crossed the last 5K mark. “I just kept yelling, ‘Come home! Dinner time! Don’t be late for dinner. Come home!’” Several minutes later, she saw his neon yellow shoes crossing the IRONMAN finish line. Logan took 120th place out of more than a thousand competitors, with a time of 10:16:35.

So after hundreds of hours of workouts, how did Logan benefit? “Mentally, I think the easy answer is that it made me a stronger person,” he says. Physically, he developed better eating habits and form while working out. “All around, it made me more competitive and knowledgeable. Just knowing that if I can put myself and my body and my friends and family and pets through that, pretty much anything is possible in my eyes.”