Making A Home Together 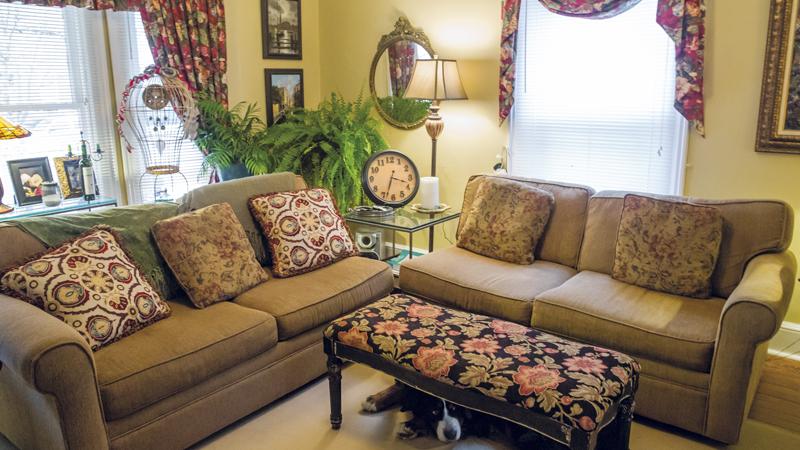 Becky and Rich Owens are single-handedly restoring the neglected house they bought in 2013 back into the home it once was.

While on the search for a new home to settle into, Rich and Becky Owens — originally from Fairfax, Va. — found a house for sale on Broadway in Hagerstown. It was Edwardian in style, with Queen Anne influences, and originally built in 1903. Though it needed a lot of TLC, the couple immediately saw its potential despite the neglect and overgrown yard. But it was when they opened the front door and found a beautiful foyer with a pretty staircase that sealed the deal.

To add to their disbelief, what they thought was a closet door on the second floor turned out to be a staircase that led to the semi-finished attic — which is now affectionately referred to as the studio, and is one of their favorite rooms in the house. Currently, the quaint room needs new electric, plaster, a little floor repair, and to be painted, but the goal is to create a personal TV room/studio space that can be used for art projects with a possible installation of a bathroom in the adjacent unfinished portion of the attic.

The couple purchased the house in September 2013 with plans for a full restoration. While still “in the process,” which will most likely continue for years, they are addressing each project themselves with help from friends — like cutting down overgrown trees and removing the damaged chimney liner. Overall, the Owenses say their goal is “for our house to reﬂect the days in which the Hub City of Hagerstown ﬂourished.”

The Owenses have always loved old houses, and their hope for restoring the house is that it be as close to original as possible — while mindfully bringing it into the present age. 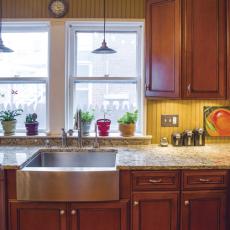 Rich and Becky have a nostalgic attachment to that time and would like to see this spirit grow in Hagerstown again, both in terms of development and community spirit.

Each stage of renovations takes time; for instance, the kitchen was unusable and updating it took over a year, but the finished product is beautiful. When they started, there were no appliances and the layout wasn’t very well though out. During the renovation, a beautiful tongue and groove floor was discovered underneath layers of subfloor, linoleum, and adhesive. The couple pulled up more than 1,000 nails and sanded through the old adhesive, which is believed to be original to the 1903 flooring installation. The end result shows some battle scars, but turned out beautifully.

Being resourceful is important, and repurposed materials are used whenever available. While remodeling the mudroom off the kitchen, they used original wainscot paneling from the garage to make a seating area where they can change their shoes and hang their coats. It’s speculated that the garage was used as a carriage house, and the wainscoting there was used to separate the horse bays and carriage storage.

Improvements to the exterior of the house included roof repair, refacing the porch posts, and adding lights and new paint. Trimming of the overgrown trees and disentanglement of the branches from surrounding power lines opened up the view, allowing light for plants in the newly installed flower beds and trellises to flourish.

In the spring, a new brick patio was installed in preparation for their wedding reception that was held in their newly renovated backyard.

Inside, the next project is to begin improvements on the top ﬂoor studio and stairwell, including pulling up the old carpet strips, ﬁnishing the ﬂoors, installing electrical outlets in the walls, and ﬁnishing the drywall and painting. Other future projects include refurbishing the main level bathroom, painting the bedrooms on the second ﬂoor and foyer stairwell, and installing crown molding throughout the house.

On the exterior, the next project is to repaint the awnings over the front windows. This spring and summer, Rich plans to replace the window weights and re-apply the glazing around the windowpanes.

Rich and Becky abide by the philosophy to “bloom where you are planted,” taking inspiration from “The Great Neighborhood Book,” and they hope the improvements made to their historic home will be a catalyst for positive change throughout their neighborhood and beyond. The couple see Hagerstown as being in the midst of a renaissance, and are proud to be a part of it, while helping to define it in their own small way. 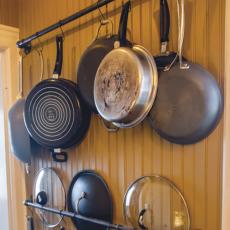 Rich and Becky are natives of northern Virginia, and their love story begins when Rich — as a young boy — had a secret crush on Becky when she was a twirler for the Falls Church High School Band from 1974 through 1977. Rich was a freshman the year after Becky graduated, and for 35 years never saw her — despite the fact that there are photos showing them standing within four feet of each other during a Falls Church High School Band reunion in 2009. The two finally met face to face by chance at a 4th of July barbecue in 2012. Since then, the fireworks have continued, and Rich finally “got the girl” in September 2016 when they were married in a beautiful wedding reception in their backyard on Broadway on a lovely fall day.

Rich is currently working as a radiation therapist, and also (obviously) enjoys doing restoration work on old homes in his spare time. Becky is a physical therapist, though she is not currently working due to a cancer diagnosis of pediatric gastrointestinal stromal tumor (GIST). She serves on the board of GIST Support International, and is active with the SDH-deficient GIST Research Advocates who work to raise funding needed to promote research for this rare, incurable cancer.

A Thing Of The Past– With A Bright Future

The history of the house is almost as unique as its current residents’ love story. In 1887, the property was part of a land tract sold by farmer George Harris to Edward Mealey, who was president of the Hagerstown Water Company. 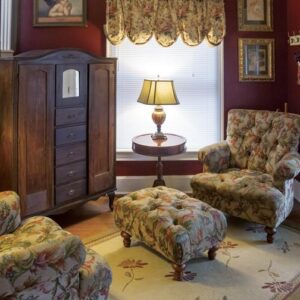 The date of 1903 is inscribed in the concrete foundation of the house. In April 1904, Edward Mealey became treasurer of the newly formed Washington County Medical Society. In order to fund the new hospital, he deeded the property to the Hospital Association in August 1905. The original Washington County Hospital opened to the public in October 1905 at the former residence of M.P. Moller at the corner of Potomac and Fairground avenues in Hagerstown. It is speculated that the Broadway house may have been used for housing nursing students while owned by the hospital. It was later sold to a private resident, Charles Johnston, who was a teller at the Hagerstown Bank, in 1908.

All of the intended renovations were not completed due to the market downturn, and the property was returned to the market with only partial improvements.

The Owenses absolutely love their new house and enjoy spending time in “the veranda,” as they affectionately call it, which is their quaint 8-feet-by-12 feet upper sleeping porch. For roughly three seasons of the year, it serves as an additional living space. They like to sit in the evening shade, just enjoying each other’s company over a glass of wine with their Bernese Mountain D­­og, Fuji, and occasionally waving to the students as they leave the trade school, and talking with neighbors.