A Case In Point 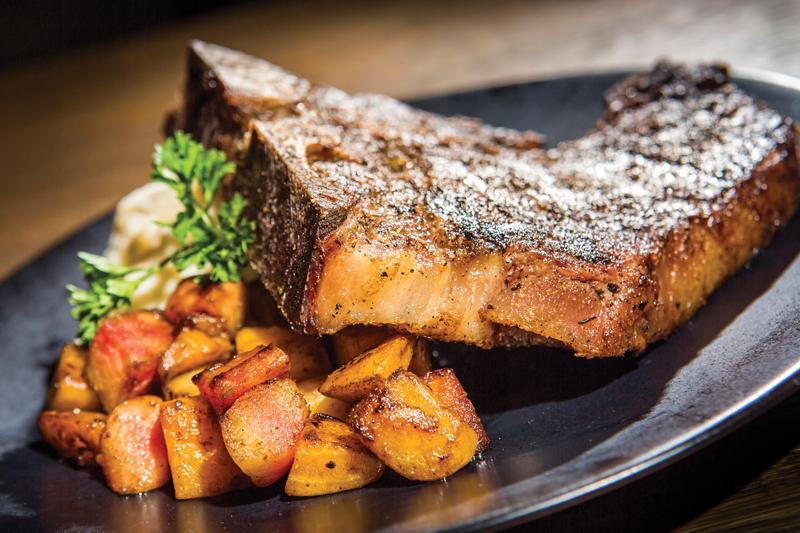 Foster’s on the Point fulfills a delicious, long-time dream for Michael and Kelli Foster

After 21 years in the insurance business, Michael Foster, along with his wife Kelli, set out to fulfill a long-time dream of opening their own restaurant. The Fosters, who dated since they were students at South Hagerstown High School, say they often talked over the years about starting a restaurant. This past March, the couple put their money where their dreams once were and leased the space on Salem Avenue in Hagerstown that was previously the Woodpoint Grill. And by the following June they opened what is now Foster’s on the Point — a blend of the couple’s last name and the street it resides on that intersects Salem Avenue.

“We had talked about it since we were young,” Michael says. “We always wanted to open up a little place.” The location at 1437 Salem Ave. also holds a connection for the Fosters as Michael’s grandparents lived across the street, up on the hill, throughout Michael’s childhood. “I came over here for burgers and fries all the time,” Michael says. In fact, since his grandparents have passed away, his parents now live in that same house. Michael’s mother says it’s funny looking out the front door and seeing her name lit up across the street.

After retiring from American General Insurance, Michael began bartending but says he and Kelli, who celebrated their 23rd wedding anniversary in October, continued to talk about opening a quaint restaurant in town. Once the ink dried on their lease, the couple used what they had both learned working in restaurants in the past, and managed every detail of the restaurant, including décor, the menu, and hiring a staff of about 24. “I had done everything in the kitchen, including dishwasher, prep, fry cook and line cook,” Michael says. He then bartended for about four years before finally opening Foster’s.

The Jumping Off Point

Foster’s on the Point offers affordable American food and drink in a rustic, yet industrial, atmosphere with a homegrown feel. Kelli describes the curated menu at Foster’s as “small but unique,” which is consistent with Michael’s goal of creating a local spot to offer great food, great prices, and great service. “You have to have those three things” consistently, he says.

The response from customers has been overwhelmingly positive. The most popular dishes include fried green tomatoes ($8); the Grown Up Grilled Cheese ($9) — made with three kinds of cheese, bacon, and grilled tomato on sourdough bread; and beer-battered asparagus ($7). The best-selling entrée thus far is the Linguine Miranda ($21), which is pasta with blackened chicken and shrimp, tossed in a spicy Parmesan cream sauce, and topped with bacon and Parmesan cheese.

But Michael concedes that Foster’s four different burgers come in at a close second, the signature being the “on point” burger, a 6-ounce patty topped with sliced avocado, crispy bacon, provolone, and a “dippy” egg. Foster’s burgers are hand formed and always fresh, as are their steaks, which are purchased from Hoffman’s Quality Meats in Hagerstown. “We are trying to stay as local as we can; we want to support local business,” says Kelli.

Foster’s also offers a “butcher’s cut” and a “catch of the day” on their regular entrée menu. The butcher’s cut will always be a steak, and the cut will differ from time to time, adding some variety to the menu. Currently they have a 17-ounce porterhouse T-bone steak, served with garlic mashed potatoes and the fresh vegetable of the day. The catch of the day, which varies as well, has also been a very popular choice with patrons. Michael says he only stocks fresh ingredients and doesn’t “over order.” Instead, he gets deliveries of fresh ingredients about every other day. “It has to be fresh,” he says.

The Fosters developed the menu, and their chef, Nicole Marie, put her own twist on it. As a teen, Nicole says she loved when her father would make fried eggs — quail eggs, to be specific. Her father, a ruminant nutrition researcher at the University of Missouri, would bring home dozens to make into a variety of dishes — and a chef was born.

Following his lead, Nicole quickly developed a mastery of the kind of American home-style classics that grace family tables nationwide. “I want to honor the American tradition of comfort food in a way that also celebrates progress,” she says. Taking her unique culinary roots with her to Le Cordon Bleu, and honing her

recipes with over 30 years of experience, Nicole has developed plates that are unpretentious and familiar. “What I love about American cuisine is that it’s constantly evolving, but still so reliable,” Nicole says. “I mean, who wouldn’t love a bowl of their Grandma’s chicken soup right about now?”

Nicole makes outstanding soups daily, many times two flavors a day. Whether you are pairing with a sandwich, a salad, or simply having a large bowl for lunch, her soups are comfort, to the next level.  And for the regular (dining on soup or otherwise), Foster’s offers a loyalty lunch card. Each time you come in for lunch, they punch your card. After nine lunches, your 10th one is free.

The freshness of the menu also extends to the bar. Foster’s uses fresh fruits, herbs, and vegetables in quite a few of the offered cocktails. The blueberry mint martini, strawberry mojito, bloody mary, and strawberry basil martini are just a few examples. Foster’s also has eight beers on tap, one being Hagerstown’s own, Antietam Brewery’s 1605 Red, honoring local firefighters, which will be a staple at Foster’s. There is also a 10 percent discount on meals and drinks for all military, police, fire and rescue personnel.

For the tech-savvy imbiber, Foster’s recently joined Untappd, an app that allows you to socially share the brew you’re currently enjoying, as well as where you’re enjoying it — may we suggest during the hours of 4–7 p.m. Monday through Friday for happy hour?

A Discerning Point Of View

Originally built as a horse stable, then turned into a bar, then most memorably known as the Woodpoint Grill, which was owned and operated by Ned South and family for decades, the restaurant changed hands a few times before the Fosters made it their own. To do so, the couple remodeled and made updates to the look and feel of the restaurant while maintaining the historic stone walls and complementing them with a rustic, industrial feel with a modern flare. That includes a sliding barn door that leads to the kitchen and a pub-style table with a wine barrel base. There is also a mahogany bar that stretches the length of the building and four flat-screen televisions.

As it stands, the restaurant has a capacity of about 90 people, but the Fosters are already planning on expanding the restaurant. By the spring or summer, they are hoping to open a large outside patio and bar. “There are not a lot of other places with outdoor seating,” Michael says — which will be perfect for when live, local music is featured on Fridays and Sundays. Sunday typically features a full-sized band, and they book smaller acoustic acts on Fridays.