Banking On Safety And Training 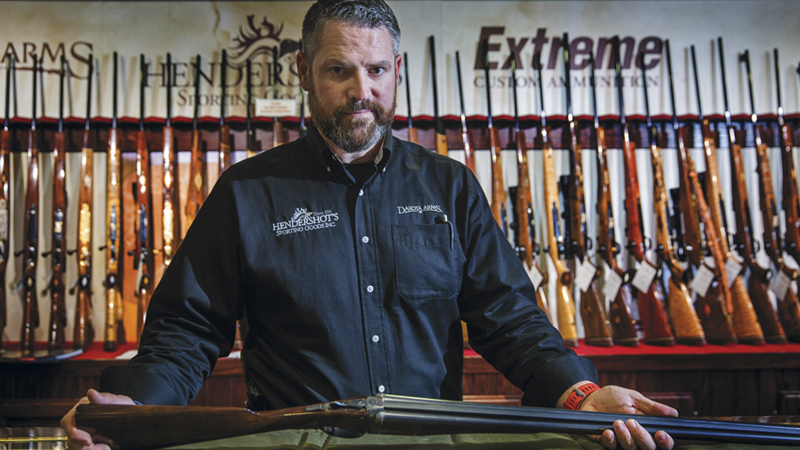 Banker-turned-firearms-trainer Alan Mullendore may have changed his professional scenery, but his passions remain constant.

If you ask Alan Mullendore to describe himself in one word, he has the answer: chameleon. As a businessman, athlete, family man, teacher, outdoorsman, artist, and activist, Alan takes pride in being able to move seamlessly in and out of all his worlds and fitting in wherever he goes. “I’m as comfortable in a business suit or madras plaid as I am in pink slacks, camo, or my tweeds and wellies,” Alan quips.

For this life-long Washington County resident, being comfortable in a quick change is an asset along the paths he’s taken. It may seem like a quantum leap for a banker to move on to becoming partner in a firearms facility, but Alan’s long been ready as a sharp-dressed man for all occasions. “My dad was in banking,” he begins his tale of employment. Alan started his path when he was 15, hand-stuffing envelopes with customers’ statements where he worked alongside seasoned employees and began his education about the back end of banking. He later worked as a teller, then in purchasing and fulfillment in the building’s basement, “where it didn’t pay to be tall,” Alan remembers with a grin about encounters with I-beams.

Over the years, his career moved him among various banks and launched him from retail banking into the commercial side where he worked on business start-ups, multi-million dollar deals, and spawned critical aha moments. Utilizing strengths in relationship building, Alan saw the powerful synergies created when movers and shakers connect. But this is getting slightly ahead of his story… 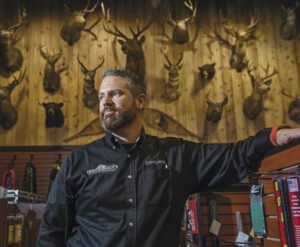 What does a high school kid with a background in banking and a football scholarship pursue in college? Finance? Business? Marketing? At the age of 18, this young banker-in-training laid his neckties aside and chased other passions. He earned his Bachelor of Fine Arts degree with concentrations in graphic design and sculpture. “When I came back to banking, I got my first job putting my degree to work in the marketing department,” says Alan.

The years at Shepherd University were only part of the life experience that opened Alan’s expanding understanding. In 2008, as a young banking business services officer, Alan was selected to join Leadership Frederick County — another pivotal influence. The program annually brings together a crop of 30-plus emerging leaders for a nine-month development experience. With themes such as health and human services, and economic development and government, the sessions are designed to give participants unique perspectives on the problems, opportunities, and issues facing Frederick County.

“Going through Leadership Frederick County was really the start of my big-picture thinking,” Alan confides. “I met a lot of people and learned a lot about business development. It allowed me to get deeper, not broader, with a lot of things, and I saw the value of meeting and connecting.” For Alan, the leadership take-away made a lasting impression that he openly credits today.

At the age of 27, Alan explored another side road when he went to work for some of the entrepreneurs he had been helping in banking. He stepped away for a year to work in outside sales for a tradesmen’s group, selling concrete. When the construction industry went from boom to bust, he returned to banking with additional business savvy. “I’ve always understood my role,” says Alan. “I’m not a product pusher; I’m a problem solver. That philosophy carries over to everything I do.”

Keeping Up The Good Work 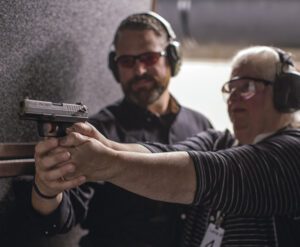 Fast forward to 2017, and you can find Alan in his new business environment as an employee of Hendershot’s Sporting Goods and visible partner in Hendershot’s Range and Training Center, on National Pike in Hagerstown. These days the chameleon has shed dark suits and polished wingtips for camo and Danner boots. He greets customers where a lineup of shotguns is the background and trophy mounts line the walls as décor.

The transition from banking to the shooting sports reflects another of Alan’s passions: He’s a lifetime outdoorsman. “I’m a recreational shooter and hunter more than a marksman competitor,”

Alan continues. “I’ve always loved those traditions like sporting clays, the pageantry of upland game, the tweeds and breeks (hunting trousers) and the beautiful hand-done work on the antique guns. My fine arts background makes me see all that as works of art.”

“Banking and firearms are not that far apart,” he adds. “I’m still a problem solver.” Customers come to him as a trusted resource, but now on other issues. He’s an educator, too, on firearm safety, hunter-trapper training, and Maryland’s Wear and Carry laws. He embraces that role seriously and takes it home where he teaches his family about the responsibilities of owning and handling firearms.

Alan is quick to say he aligns his moral compass with the impact his actions will have on his wife Johanna, and daughters Tenley and Harper, ages 8 and 4. “When I make decisions or choose to get involved in anything, I try to think a few steps ahead. I always stop and ask, ‘How will this affect my family,’” he states as a matter of fact.

Family is the foundation for Alan’s life and he credits his parents with feeding his curiosity and creativity and sending him down the leadership path. They also set the bar for his political involvement that started at the age of 6 when he handed out materials at the polls. “My parents volunteered and were always engaged in the political process,” he reports. “I came from a family of doers, not watchers.”

As a doer, Alan gets frequent demands for his time. “I’ve learned to trim back my volunteering to organizations that share my mission, vision, and values.” That’s great news for organizations such as the YMCA and Rotary Club that get a full slice of Alan’s attention. And in the style of his parents, he’s politically engaged. He serves as the appointed representative to Commissioner Wayne Keefer on Washington County’s outreach funding committee. There’s some talk, too, about a political run somewhere in his future.

There is a principle in chaos theory called the butterfly effect that Alan has come to embrace. “The butterfly effect shows us how what we do matters forever,” Alan says. “I want people to see I’ve used my experiences to make a positive difference. I have a vested interest in my family and in my community, and when I’m gone, I want to leave that same legacy.”