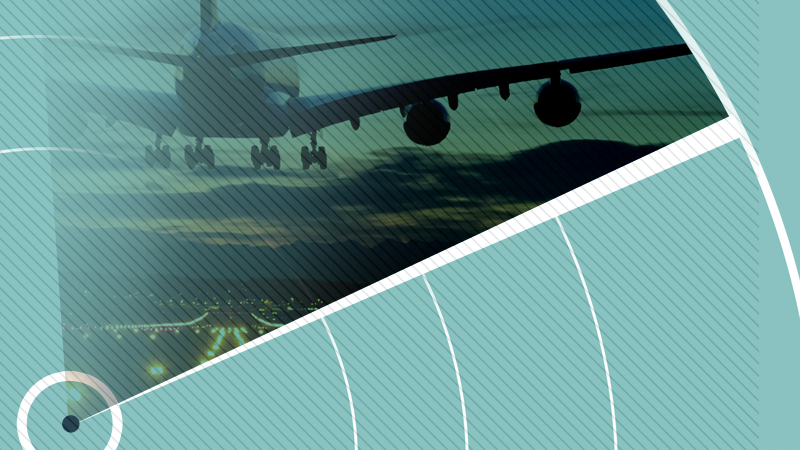 Hagerstown Regional Airport is providing a concourse for transporting travelers and transforming the local economy.

Imagine, if you will, a place that involves saving lives, offering instruction for new careers, and transporting people to magical places. All of this, and more, takes place on a daily basis at the Hagerstown Regional Airport, just north of the city.

Recently celebrating 100 years of aviation in Hagerstown, the airport’s storied past has involved an array of activity that ranged from supporting the war effort to providing regional airline transportation. The airport’s most famous tenant is probably Fairchild Aircraft Manufacturing Company. The Fairchild-Republic

A-10 Thunderbolt — assembled and test flown in Hagerstown — continues to provide protection for ground troops as an active member of the U.S. Air Force.

Despite the departure of companies like Fairchild-Republic and Piedmont Airlines, these activities carry on today at the airport with additional services designed to support the needs of the airport and the aviation industry throughout the region.

Southern Airways Express currently provides travelers with service to Baltimore-Washington International (BWI) Airport and Pittsburgh International Airport. The airline uses the Cessna Caravan, a single-engine turboprop that can seat nine passengers. Passengers may be apprehensive about a single-engine aircraft, but the Caravan has a proven track record as an economical yet reliable aircraft for transporting passengers and cargo overland and sea.

Travelers from the area are taking advantage of the $49 one-way fares. The airline has transported 6,565 total passengers as of Oct. 31, 2016, up from 3,177 total passengers last year. The fares are affordable because the flights are conducted under the government’s Essential Air Service (EAS) program, which aims to provide scheduled passenger service to remote areas throughout the country.

For nearly half a century Hagerstown provided commuter airline service to nearby international airports where the more exotic options existed. The fact remained, if someone wanted to travel to a tourist destination they had to get to a major airport. 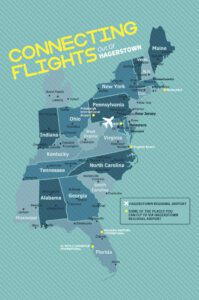 In 2008, the airport landed Allegiant Airlines to provide direct-service flights to Orlando, Fla. To keep costs low, the Las Vegas-based airline avoids hefty gate fees by flying into satellite airports on both ends. Orlando-destined flights arrive at Orlando-Sanford International as opposed to the more popular Orlando International; and Hagerstown was a perfect, economical alternative to the “DC-3.” Fair warning though: the airline also charges for optional services that one may find included with other airlines. These costs include not just checked luggage, but carry-on bags, and the ability to select your own seat.

After a several-year break, Allegiant Air came roaring back in 2012 with its McDonnell Douglas MD-80s once again providing non-stop service to Orlando, Fla. The airline continues to provide flights twice a week. During certain times of the year Allegiant adds additional flights throughout the week to meet demand. In February 2015, the airline began service from Hagerstown to the gulf coast of Florida, with flights to the St. Pete-Clearwater International Airport just west of Tampa. As of Nov. 9, Allegiant transported 40,125 total passengers in 2016.

Liberty Air Management provides a more intimate experience offering charter flights. Their Hagerstown-based King Air C90 can transport passengers to the island of Nantucket off Cape Cod, Mass., in approximately two hours from the Baltimore metro area — so add a little extra time for flights coming from western Maryland. Their chartered flights are also capable of transporting travelers to the Virginia Beach, Va., area from Hagerstown in just 90 minutes.

Airplanes can take off from and land on any old tarmac, but regardless of where, all of them need pilots and mechanics, and Hagerstown Regional Airport offers instruction in both.

Pittsburgh Institute of Aeronautics (PIA) opened its Hagerstown branch in April 2011. Aided by a $272,975 grant from the Appalachian Regional Commission with matching funds from local sources, the school is the exclusive Aviation Maintenance Technology program in the state of Maryland. The institution’s four-term, 16-month program prepares students for certification as airframe and power plant mechanics, allowing them to work on aircraft structures and their engines. The maintenance facilities at Hagerstown present graduates with job opportunities literally right across the street. An added boon comes from businesses being attracted to Hagerstown because PIA can supply the labor force.

Cycle Aviation included the presence of PIA as one of its reasons to add a facility in Hagerstown in early 2016. The company provides pre-purchase, routine and unscheduled inspections, avionics troubleshooting and upgrades, oxygen support, regulatory certifications, and more for turbine, turboprop, and piston aircraft.

Assistant Washington County Administrator Sarah Sprecher believes incentives played a significant role in the move. The company received a $100,000 conditional loan for its efforts to bring jobs to the area. The loan will convert to a grant if the company achieves its employment goals. “Conditional loans are popular ways to give incentives for companies to follow through with their job commitments. We’ve found most companies favor more of a cash-based incentive. They do appreciate tax credits and incentives, but we find that the cash is really what helps turn the corner for our projects,” Sarah adds.

Carrying on Fairchild’s tradition of defense contracts is Sierra Nevada Corporation, an aerospace company that modifies aircraft for special missions. One of the airport’s largest employers, a primary mission of this location is providing multi-role enforcement aircraft for the U.S. Customs and Border Protection. Sierra Nevada received $6.5 million in Recovery Zone Facility Bonds (RZFBs) to go toward expanding their facilities in Hagerstown to accommodate the projects awarded by the government. RZFBs are a new type of tax-exempt private activity bond to stimulate business development in distressed areas. Sierra-Nevada’s RZFB was celebrated as the first use of one in Maryland since they were created in 2009 under the American Recovery and Reinvestment Act.

Of course, what good is an airplane without a pilot or two to fly it? Aaron Harrison and Bryan Adamez own the two flight schools on the field that offer flight instruction to future pilots.

Aaron founded Hagerstown Flight School in 2010. The school uses a Cessna 172 Skyhawk and Piper Cherokee, which are popular, time-honored trainers found on flight school flight lines across the country. Aaron and a team of independent flight instructors are available to provide flight instruction to aspiring pilots. Over 50 pilots achieved a new certificate or rating through the flight school. Aaron encourages students to explore local flight schools over academies, which is the path he took to achieve his goals. “I started at a local flight school, and completed all of my training at local flight schools. You can pay as you go. You can fulfill your dream without going into debt,” says Aaron. When asked about the rewarding moments of flight instruction he replies, “Anytime a student solos, it can’t be put into words. Sure, it’s an achievement when someone passes their checkride, but when you see someone fly for the first time, words can’t describe that moment.”

Bryan Adamez, who owns V1 Aeronautics, is a relative newcomer to the airport. Around the summer of 2015 Bryan began offering flight training in a Cessna 172. While the school offers a Piper Cherokee for students, his primary trainer is a Diamond DA-40. The DA-40 is a modern aircraft with a composite airframe and a “glass” cockpit, meaning it has a digital electronic primary flight display and multi-function display instead of the traditional gauges found in older aircraft. For the days when the weather is not conducive to instructing in the air, V1 Aeronautics also has a Red Bird motion simulator that offers a realistic experience with multiple aircraft configurations and air traffic control services. V1’s Unmanned Aircraft System (UAS) weekend courses, which provide the necessary training for certification to operate drones commercially, have also caught the attention of many. Testing for exams can be accomplished in V1’s testing center, and the school’s Facebook page is regularly updated with news about upcoming courses.

Providing support since 2003 for many of the tenants and visitors is Rider Jet Center, the airport’s fixed-base operator (FBO). Outside, pilots top off the fuel tanks, and the inside offers an array of conveniences that include supplies for the pilot and aircraft, briefing rooms that offer pilots a chance to obtain up-to-the-minute weather information, and snooze rooms where crews can rest prior to departing for their next destination. Transportation and lodging arrangements can be made through the FBO as well as utilizing its conference rooms to conduct meetings. The staff at Rider Jet Center is usually there to marshal an aircraft in and greet its occupants — a service not found at Sheetz or AC&T.

The personally-financed, multi-million dollar new facility also includes Runways Restaurant and Lounge. While currently undergoing renovations and new management, the restaurant overlooks the airfield, offering patrons the chance to watch the activity of various aircraft. While communities like Santa Monica, Calif., and Mascoutah, Ill., battle to close — or try to save — their local airport, Washington County is investing in its airport’s future, and the benefits are already being seen.