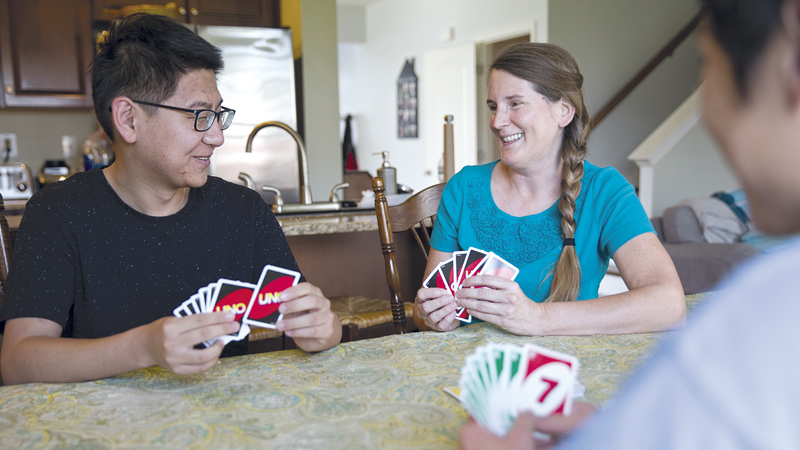 Parents receive a series of unique benefits as their children grow and mature. The satisfaction of accomplishments or recognition of obstacles by those children — whether in small personal events, successes, sports, academics, or maturity — are reflected and indelibly intertwined in your emotional makeup. It is not something that can be quantified or financially enumerated, yet permanently enhances each person and the family as a whole.

American families today are much more diverse than in years past. The raising of children is a shared cultural experience that can strengthen the understanding of that diversity. This has been positively enhanced through the efforts of gphomestay who has been assisting local families to open their homes to Chinese and Korean high school students since 2011. “This has been the greatest experience for our family and we get to share their cultures,” says Shelly Kline who, has been hosting Sihan Qu who, along with her husband Jamie and their family, has been hosting Sihan Qu for the last two years. “I got into it so that I could be a positive influence on them.”

“It really expands your cultural boundaries,” says Jamie. “We feel a strong sense of responsibility for raising someone else’s children,” he says, adding that experience has had a powerful impact on his whole family. “It is a great privilege to raise someone else’s child and to have their parents trust us to do that.”

“It does take time, energy, and love to pour into a student,” says Lori Boutieller, who is currently hosting LI Han, who goes by the nickname Kevin. She is also hosting two other international students from Iceland and Montenegro who go to Broadfording Christian Academy. But because of her proximity to the school, Lori wanted to get a student for St. Maria Goretti High School as

well. “It is awesome they are from three different parts of the world and they get along as brothers,” Lori says, who also notes that assimilating into a new culture can be scary for the students, but is also very rewarding. “You receive so much from them and the bond has become very strong.”

The Tie That Binds 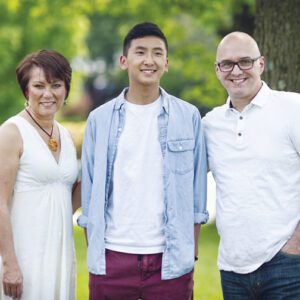 That strong bond is evident from the boys as well, but it is the cultural differences that create the dynamic.

“I really like American culture,” says Kevin. “I was kind of afraid to speak at school, but everyone helped me out.” Kevin has since gone on to join various sports teams, and notes that he has become much more independent. Kevin’s gphomestay agent picked the school for him, and he has been thoroughly enjoying it so far.

“The academic and athletic programs are very good. And the culture clash has been more of a culture concurrence for him. “Americans have more respect for individuals and respect your point of view. In China, if a teacher asks me a question the answer must fit the mainstream — here I can be myself and I have more freedom in class and more openness.”

“Now is the age of globalization so to be successful as a global citizen it is beneficial to learn about other cultures,” says Sihan Qu. “The U.S. is a very interesting culture and I thought it would be good to come here.” He says the experience has helped him to learn to walk in the shoes of others and understand the lives of others. “Just learning things every day and being independent is what I like a lot. At home in China, my mom does a lot of things. Here, I have learned how to use the washing machine. I am constantly learning life knowledge — not just school knowledge,” which he says helps create a foundation of success in life.

Gphomestay is a sister company of the Cambridge Institute of International Education and they work together to build international student programs. “Our students come primarily from China, with some from South Korea,” says Amber Perry, a host recruitment coordinator for gphomestay. “The ultimate goal for the student is to get into an American university and they must speak conversational English so they can keep up with their classes.” The program features different sized programs for different schools, and Amber says the process is similar to picking which college to attend. “After placement, gphomestay monitors how the students are doing in school and make sure they are on track.”

As for host families, they don’t have a lot of requirements for the family structure — they can be single parents or any other combination. “We have a lot of great hosts that are single and we only require them to be a warm, welcoming host family,” says Amber. “The main requirements to host the students are a private bedroom, three meals per day, and transportation to a partner school,” she says. The host family must also live within 30 miles of the school and commit to 10 months of the school year. “We talk to the host family and do a host screen by telephone and email them a link to complete the application online,” Amber continues. “We email them background check documents for anyone over 18 and we schedule a site visit for a local rep to interview the family and take pictures of the home.” Once a host family is chosen and a child is placed, a local support services coordinator is assigned to each of their partner schools and is the host family’s contact during the duration of the student’s stay and is available 24/7 to assist with any issues with the student.

There are monthly check-ins with the host family and each household receives a monthly stipend depending on the cost of living ranges from $800—1,200 per month. “Each student is responsible for any other fees and they must have their own spending money,” Amber says.

This program has a tangible impact on the individuals, the families, and even the future. “If you already have your own kids you need to consider their thoughts on hosting a student,” says Lori. “Make sure they are all for it. Ours love it!” Since his arrival, Lori describes Kevin as “the life of the party” and relishes all of the laughter he’s brought to their home. It’s also been fun watching him grow up, she says. “He is turning into a nice young man and we have had the joy to see that progressing in his life. He is learning U.S. culture and is helping around the house, and as a boy in 9th grade, he is looking outside of himself — and that is great.”

A Stranger In A Strange Land 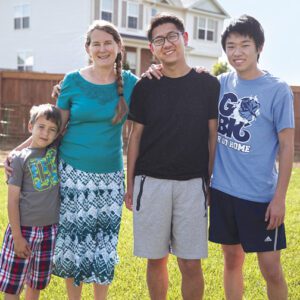 “He was an only child and he had to get used to our larger family,” says Shelly of Sihan. “We have two children that live at home and five grandchildren that he had to get used to.” But Sihan has come a long way integrating here, and will be going to Beloit College in Wisconsin next year. “This has been the greatest experience for us,” Shelly says.

The changes reflect differences in lifestyle as well. “I am from Shanghia,” says Sihan. “The environment changed a lot as I am from a very big city and here people have a very rural life. It is a great experience really. Everyone can be a diplomat by doing this as putting yourself outside of your comfort zone is an enriching experience that helps you to have a richer life.” For Kevin, the social life and atmosphere here has been a big plus. “The people here are really friendly and don’t have as much prejudice as back home. In school I like all of the classes and my classmates, [and here] the teachers give you advice, but they don’t intervene in your personal life.”

“People [here] are more direct and if they have an issue or problem they just tell you,” Kevin says. “You have more freedom to choose, and you can make your own choices. As an international student, I learn a lot from life.” He estimates that 70 percent of what he

has learned here has happened outside of school. “This makes me a better person. I respect people more, and I respect their choices, and my personality is stronger as I am more of an individual.

I can put two cultures together — instead of choosing one or the other.”

Introduce A New Culture To Your Home

Anyone interested in hosting an international student can contact gphomestay through Amber Perry via email at aperry@gphomestay.com;