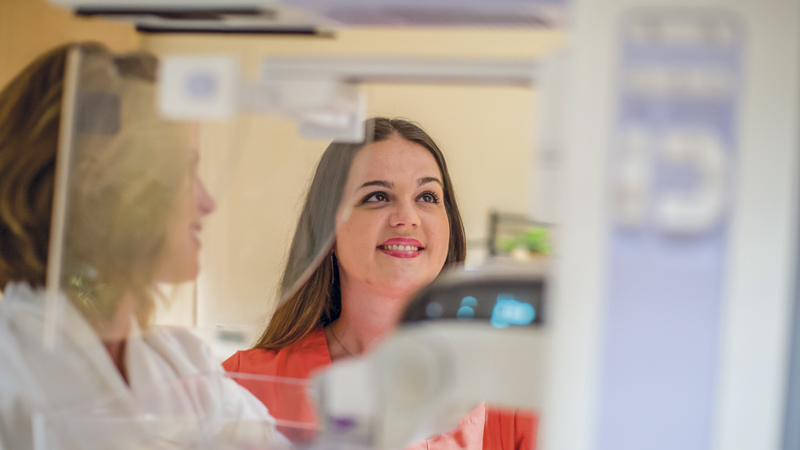 Hagerstown and the surrounding area have a wealth of specialists, support groups, and surgeons to help diagnose and treat this wide-spread disease.

Hagerstown and the surrounding area have a wealth of specialists, support groups, and surgeons to help diagnose and treat this wide-spread disease.

“Breast cancer awareness.” You’ve probably heard these words hundreds of times, urging you to watch for cancer signs and to join the “pink ribbon” movement to find a cure. But the words take on new meaning after an abnormal mammogram or biopsy — and even more so if the testing leads to a cancer diagnosis.

Fortunately, only 10–20 percent of biopsies return that diagnosis, says Dr. Lori Oetting Eakin, MD, a breast surgeon at Summit Breast Care Services. But when you are the one who hears “You have cancer,” there will be a barrage of questions. What does my biopsy report mean? Will I need chemo? Should I have a lumpectomy or mastectomy?  Will I survive?

Beth Quinn, Ella Health’s regional director for Maryland, worries that too many women avoid what she calls their “best defense” against an unfavorable outcome — the mammogram — because they are typically afraid. “It’s like when you are having a baby and people tell you the worst labor experience; they tell you how bad their mammogram was. Some women wait, later finding they have cancer that could have been addressed earlier,” she says. Meanwhile, some cancer specialists say just over 30 percent of their patients never felt the lump; it was the mammogram that caught it.

3-D mammography, which is becoming standard, picks up 41 percent more invasive breast cancer than digital mammography. It yields more views of the breast — in detailed slices — rather than a few flat images. And it requires the same radiation dose (slightly more than from a chest X-ray). 3-D mammography also helps to get around the problem of detecting cancer in dense or fibrous breasts. The images also may show calcifications (calcium deposits), which become concerning when they are a tightly grouped cluster or irregular in shape.

What will the biopsy reveal?

An abnormal mammogram may lead to a core biopsy where small tissue samples are extracted with a needle. If this test confirms cancer, it will tell whether it is ductal (abnormal cells confined to the milk duct) or lobular (escaped from the duct with potential to spread). The biopsy will tell whether the malignancy has estrogen receptors (tumors feed on estrogen) or HER2 receptors (indicating overproduction of a protein promoting cancer growth). And this procedure indicates whether tumors are fast- or slow-growing.

Breast surgeons make recommendations based on size and number of tumors. Patients with few and relatively small growths are usually candidates for a tissue-sparing lumpectomy. Summit’s Dr. Eakin, like all breast surgeons, leaves the decision to patients but prefers the lumpectomy. “Reconstruction has gotten wonderful results, but the breast is never the same as the one the patient started with. And with mastectomy the silicone prostheses are heavy and not comfortable,” she says, adding some women with large or multiple tumors can opt for chemotherapy prior to surgery to shrink the tumor(s), followed by lumpectomy. Another possible lumpectomy option is to rearrange breast tissue to try and get good cosmetic results.

Still, some women chose mastectomy, fearful the cancer will otherwise return or that they will get a new cancer. Though with lumpectomy combined with radiation, the chance for recurrence in the breast is 6–12 percent. With mastectomy only it’s 5–10 percent, says Dr. Eakin.

After a mastectomy, women can have reconstructive surgery, which could be an implant filled with saline or silicone to rebuild the breast, or a flap using the patient’s tissue. With a DFlap, blood vessels in the belly are disconnected and rerouted to the chest wall along with tissue. The TramFlap — also using belly tissue — is a little less complicated as vessels do not have to be disconnected.

“You are so overwhelmed with everything going on … We tell them we’d like to send them an angel. This person sends them a card each week they are in treatment. Great friendships have been made.”
Janet Lung, executive director, Breast Cancer Awareness — Cumberland Valley in Hagerstown

Radiation treatment can play a role in reconstruction decisions, says Dr. Salvatore Dimercurio, MD, a plastic surgeon in Hagerstown. “Radiation may require flap surgery as radiated tissue is more vulnerable to non-healing. And expansion [to stretch breast tissue prior to flap reconstruction or implant] is riskier,” he says. A common concern women share with him is that their breasts will be asymmetric following a one-sided mastectomy. But surgeons can usually get good results by reconstructing both breasts.

When Is Chemo A Good Idea?

There are diagnostic tests to determine cancer’s behavior, which is key to guiding treatment decisions. While aggressive cancers often respond well to chemotherapy, it kills all rapidly growing cells — good and bad ones. But therapies targeting certain cancers may be an alternative, killing only malignant cells.

Radiation is often the last stretch of treatment and an important one, says Dr. Dan Cornell, MD, medical director for radiation oncology at Meritus Health’s John R. Marsh Cancer Center. “If you just stop after removing tumors, about 30 percent of cancers will come back. Radiation therapy lowers risk to about 9 percent [depending primarily on size and aggressiveness of the tumor],” he says.

Most women will have 33 treatments, and there can be side effects like skin redness, fatigue, and increased chance of osteoporosis in treated ribs. Though a shorter program for women over 50 significantly decreases these problems. 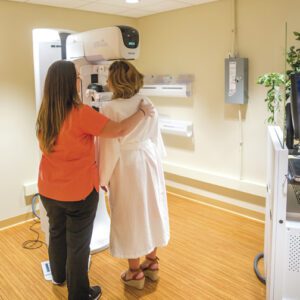 “You are so overwhelmed with everything going on,” says Janet Lung, executive director, Breast Cancer Awareness — Cumberland Valley in Hagerstown. The organization has free offerings for women in Southern Pennsylvania, Western Maryland and the Eastern panhandle of West Virginia, including wigs, bras for women who have had mastectomies, and a support group. “We tell them we’d like to send them an angel. This person sends them a card each week they are in treatment. Great friendships have been made. They will have lunch together and call each other. When treatment’s over they still have that connection,” says Janet, a breast cancer survivor herself.

A support group with a core of long-term survivors also reaches out to newly diagnosed women. “Some first come here with that ‘Oh my God, deer in the headlights’ look. We just listen and let them know the things they are afraid of that we felt. The more we chat the less they worry about how their 6-year-old will handle this, or whatever they are concerned about,” says Janet.

Breast cancer is a mind-blowing diagnosis. But practitioners and researchers are learning ways to improve outcomes — from figuring out who may best benefit from chemo and who can bypass it, to delivering radiation more precisely to avoid the heart and other tissue.

What’s newest in Dr. Eakin’s arena is a protocol to spare lymph nodes, which filter toxins and cancer cells. But they sometimes fill with cancer. “When I started, you took all the nodes in the arm pit and behind the chest wall muscle to prevent cancer from spreading. We have since learned if [the first sampled] two or three nodes have no cancer there is minimal chance the other nodes will. So we can save the remaining nodes, give radiation, and survival and recurrence rates are the same,” she says.

And while cancer was once a taboo subject, more groups are forming to change that, which Janet thinks is important to healing. “When I had my biopsy and the nurse was wrapping me in bandages after the doctor left the room, she said, ‘I know you are scared.’ But there’s a lot of life left after cancer.

I am glad she was the nurse working that day. I didn’t believe it at first, but further down the road, it really helped.”