Bringing The Solar System Down To Earth 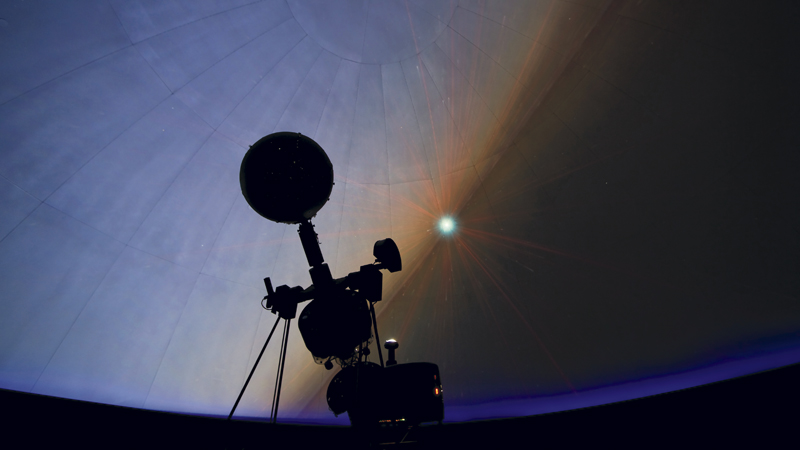 The William Brish Planetarium offers children and adults the ability to explore the skies and beyond.

Man has always looked beyond the horizon. From the earliest of times, people have searched the heavens using the stars and planets for everything from navigating the seas, to planting and harvesting crops and conducting religious ceremonies. Civilizations as different and as geographically far apart as the ancient Egyptians and the Aztecs have had a dedicated stratum of society to interpret celestial movements.

Today we still seek to explore the realms of outer space, looking into its farthest reaches for other life forms and for other planets to inhabit. A perfect example is Elon Musk, the founder of PayPal, Tesla, and perhaps his most challenging endeavor, SpaceX, which fathered the first reusable rocket.

A little closer to home, this curiosity about what lies outside our tiny orb is stimulated by a wonderful resource in Hagerstown known as the William Brish Planetarium. Housed in an unassuming one-story building, attached to the Board of Education at 820 Commonwealth Ave., this facility has recently undergone some key changes to bring it into the interactive digital age.

The dome, some 30 feet in diameter, now has better projection capabilities, allowing not only for a variety of prepared programs to be shown, but also for students to “do it themselves.” “With the new system, a student can take a picture of the night sky from his or her backyard, upload it and project it onto the curved ceiling,” notes Chris Kopco, a STEM resource teacher with the Washington County Public School System and a member of the TriState Astronomers. His interest in astronomy was stimulated by his father who would mount a telescope in the backyard of their house to look at the moon and other celestial bodies.

The dome room, with its black painted concrete block walls, is outfitted with LED lights tucked into a cover area around the ceiling circumference, which can be programmed to simulate the rising and setting of the sun. Drawn on the cove face covering the lights is a representation of the skyline of Hagerstown as it was in the 1960s — about the time that the planetarium opened. A close look at the dome reveals it is made of metal with numerous perforations to provide for air circulation and acoustics.

Domes are a traditional style for planetariums to better reflect the curvature of the earth. “From our position on the planet, the sky seems circular and the shape of the dome gives the sensation of depth,” says Chris.

Onto this rounded surface can be projected any number of programs that will educate and enthrall, from the biblical “’Tis The Season” — an exploration of what the Three Wise Men saw when they followed the Star of Bethlehem — to the basic, such as ahow to buy a telescope.

The planetarium bears the name of William Brish, who was the superintendent of schools in Washington County from 1947–1973 and a strong advocate of using the latest technology for educational purposes.

Since 1969, it has been open to all Washington County students from K–12. Kay Papeskov and her 9- and 11-year-old daughters often visit the site on school field trips, and she is more excited about them than ever as the new upgrades will make outer space that much more stirring and have more of a lasting impact.

For Kay, this is important, as she never misses an opportunity to go to the planetarium, which she does often as a member of the TriState Astronomers. She is fascinated by the mystery and beauty of space. “When I attended my first program presented by the TriState group and I saw Saturn through their telescopes, I was hooked.” she says.

The girls will now find a classroom with 20 laptops, which they and their fellow students can take into the dome room and work with various programs using a hand-held controller. Or they can view educational movies, such as “One World, One Sky: Big Birds Adventure,” which is a Sesame Street production.

What attracts kids most? “Black holes,” says Chris. These are not new in space lore, they have been the subject of story lines from “Star Trek” to “Star Wars”. They refer to places in space where the tug of gravity is so extreme that not even light can escape, and can only be “seen” with special space telescopes.

Outside of the building is a model of an Apollo space capsule, which the planetarium received from NASA, says Chris. “It is not an original item, but one made for display purposes,” he notes. But the effect of awe is still the same, imagining men crammed into such a small vehicle in the disorienting blackness of space.

In addition to its one-hour programs, the planetarium also offers a portable, inflatable Digital Star Lab (also dome-shaped) which can be taken to schools. “This is a newer one which, at six feet in height, allows students to stand up and enter instead of having to crawl in as before,” Chris says. However, it needs a fairly large room to set up and comes complete with teacher.

The hopeful ambition for generations to come is to find a means of transportation to explore our solar system and beyond. Unfortunately, most of the other planets are not habitable for one reason or another, with one possible exception, Titan, one of Saturn’s moons, which is a favorite of Chris. It has its drawbacks in terms of colonization, but according to NASA, “it is one of the most earth-like worlds we have found to date.” For Kay, it is Mars that draws her to repeated quandaries of the possibility of exploration because visiting there seems to be the most realistic possibility. But if she could fulfill her dreams, “I would just go, even if it were only a one-way trip.”

Public programs at the planetarium are held throughout the school year, generally on the first and fourth Tuesday of the month at 5:30 and

7 p.m. The early show offers a more child-oriented program, while the later show provides a more in-depth look at astronomy. There is a fee of $2 for students and $3 for adults. Children under 5 are free. Older adults can apply for a Gold Card from the Board of Education, which allows them free entry. Private showings are also available on a limited basis.