90 Years Of Theater For The Community 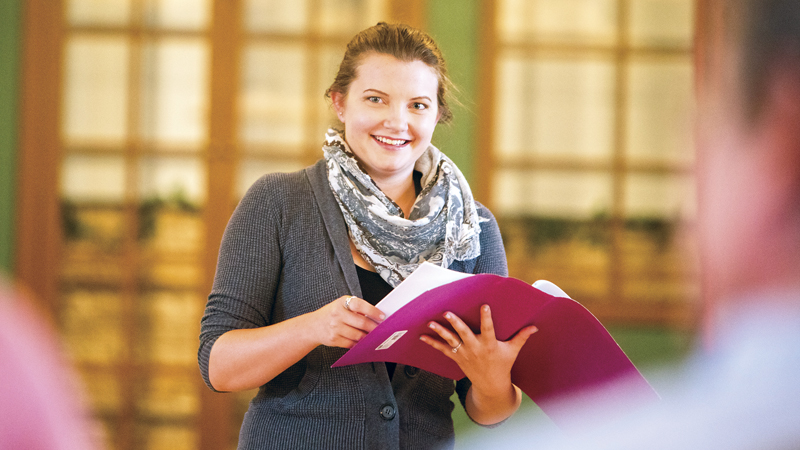 The Potomac Playmakers will celebrate their 90th year of performances this November with a throwback presentation of the same play they began with.

Performance hopefuls ring the room as the Potomac Playmakers host auditions for the upcoming season opening. Among them is veteran thespian Al Gardner who has 115 performances to his credit on the Hagerstown stage and elsewhere. “I’m 200 years old and I discovered I have a face that makes people laugh,” he quips — a bit of mischief in his brilliant blue eyes. In truth, he is 89, yet still younger than the Playmakers organization itself. The Hagerstown community theater will celebrate its 90th anniversary in November.

“The Potomac Playmakers have been around a long time,” notes Barry Harbaugh, the group’s board president. “We are probably the fourth or fifth oldest community theater group in the country. I think that longevity alone speaks to the quality of our productions and the commitment of our volunteers, sponsors and patrons.” Ninety years of success is cause to celebrate and the upcoming fall schedule of shows and special events promises a fitting tribute, delighting audiences while challenging and rewarding actors as well.

Presenting from their long-time home at the Hagerstown Women’s Club on South Prospect Street, the Playmakers open their 2016 season on Sept. 9 showcasing three one-act plays by local playwrights recognized in the Frostburg, writing competition. On Nov. 11, the group will launch their true anniversary celebration with “The Boomerang,” the same 1920s romantic comedy Playmakers debuted on their first opening night on Nov. 11, 1926. According to show director and board secretary Barb McCormick, this promises a big production with a gorgeous set and costumes.

Like most nonprofits, community theaters struggle financially and must keep an eye to the future. Among the challenges is technology that sends entertainment directly to the viewer — on demand, and on devices that are always at the fingertips. The success of live theater depends on its ability to deliver something more. That’s the delineator the Playmakers offer; their productions are more than a passive experience. The audience becomes invested as a story unfolds. They see, hear and feel it in real time, without interruption.

“There is a separation between the performance and the audience when technology is introduced,” says Barb. “For actors, live theater brings instant gratification that affects their performance. For audiences, that shared experience helps bring a community together.” Barb and Barry both agree that community theater helps move a community forward by tackling social issues on stage. “The Laramie Project” was one of those productions. The play was based on hundreds of citizen interviews after the 1998 hate-crime murder of a gay college student. It was presented as theater in the round, and as cast members moved in and out among the audience, there was a feeling of authentic involvement for all in attendance. “I remember the comment cards after that show,” Barb recalls. “One audience member wrote: ‘It made me feel like I could make a difference personally.’ An actor commented: ‘I always learn something about my craft. This time I learned something new about me.’”

“Audiences continue to delight and surprise me,” says Tod Williams, a Playmakers cast member and one of the talents who creates the magic of make-up, costumes, and set design. “No two performances are the same. The interaction with the audience affects each performance. When you bring together a disparate group of people, you get different perspectives and each audience has its own personality.”

Like all Playmakers volunteers, Tod admits he draws energy from audience reaction and that drives everyone to want to delight the audience in return. “The set and costumes are part of the magic for playgoers,” he affirms. “I love the payoff when something elicits a comment. Ninety percent of our shows only get one set. The challenge is to make the base in a way that transports the audience to a different time and place. The beauty is in the details.”

Tod, Barb, and Barry all have related theater education and professional experience in their background, but all realize that it’s not realistic to think of making a living from theater while staying in this area. “On any given day, acting has 95 percent unemployment,” laughs Barry. “Theater has been my passion and my vice for 40 years. The closest I get to feeding my soul in my day job is when I sing while I’m driving my forklift!” That’s good news for the community, because those with theater in their blood choose to share their passion and talent locally as volunteers.

“Community theater is a family,” Tod reflects. “If you’re new to a community, it’s a great place to meet people. There is the idea that the only opportunities are for actors, but volunteers can help with the physical work of building sets or making costumes, too. Theater needs people who can share their skills in advertising and marketing or who want to interact directly with the audience by selling tickets or refreshments. All it takes is a couple of hours a week.” he adds. “Theater people will welcome you instantly. They don’t care what your day job is or how much you make. They only care that you show up and do the job you promised to do.”

Barb has worked in the performance arts with young people too, and sees another value as well. “You can become someone different for a few hours a week and it can help you through some dark times,” she says simply. “Acting expands your thinking and helps you get outside your box. For kids in particular, it helps them see other possibilities for their lives. First they are pretending to be a doctor or a fire chief, then they begin to see those as real possibilities for their lives.”

Volunteers, donors, and patrons are critical to the future of Potomac Playmakers. Their dream is to increase their visibility in the community and attract audiences that are more diverse. That also means seeking a permanent home with more audience seating and a place to construct and store sets. Ticket prices of $13 at the door, or $10 per show by subscription, support only a small portion of operating costs. “Although some grant monies are awarded to Playmakers, it is the community that provides our ongoing power,” Barb states. “It takes the support of people who are not backstage to keep us alive.”

After 62 years with the Playmakers as actor, director, and board member, Al Gardner sums it up this way: “Tear yourself away from television, Netflix, and your phone for an evening,” he entreats. “Come out and watch people tell a story, live on stage. Change your routine one time. It may change everything.”

90 Years In The Making

For a complete schedule of the Playmakers 2016–2017 season, ticket information, and coming special events, visit www.potomacplaymakers.org.